Most of the Tirol chocolate that you find in Japan is sold in tiny little squares. I found this larger bar, which is about the size of three of the smaller size candies, for 25 yen at a local 99 yen store. The old-fashioned wrapper, which seems to feature the FTD florist character in profile when he was a child, is rather curious compared to the newer, cuter package styles. This is the only Tirol candy sold as a bar sold in this size.

When I bought this bar, I thought it was a plain chocolate bar because the top just says "chocolate". The side also appears to simply say "chocolate" (in Japanese) as well, but if you look on the bottom, just under the Japanese word for chocolate is the Japanese for "nougat". So, when I bit into this bar, I was rather shocked to encounter some tough resistance from what I thought was some form of caramel. 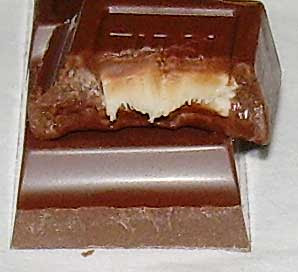 While the texture of the nougat is tough and hard to bite through, and, like caramel, it sticks to your teeth, the taste is definitely nougat. The filling tastes a lot like a Three Musketeers bar though the texture is like eating taffy. This is a pretty typical texture combination for Tirol chocolates. The non-"premium" size of their kinako mochi candy has a similar tough to chew interior surrounded by a soft, sweet, mildly crumbly and easily melted exterior.

The bar smells like sweet, milky chocolate and the nougat has a very nice flavor, but I wouldn't want to eat this too often for fear of losing a filling. I also don't like to have to jog little blobs of nougat out of my teeth with my tongue. The portion control on this is great. It's small enough to satisfy without having to reach for another bar, unlike the smaller Tirol candies. It's only 113 calories for this 22 gram/.77 oz. bar.

There aren't many nougat bars in Japan, so if I was in the mood for it, I'd buy this again. I just wish the interior was less tough. Aside from the texture issue, this is a very enjoyable little bar. If you don't mind a good chew, you might want to sample this.

If you like the Tirol designs you've seen in the reviews of their candy on this site, you can download some wallpapers of this bar's design (though honestly, you'd look like a pedophile with a Greek God complex if you sported this design on your computer) or some of the other characters that have been shown on their wrappers including the little blobby cartoon fellow who looks like Shmoo on the kinako mochi candy.
Posted by Orchid64 at 12:00 AM

Cute wallpapers! I just set the Kinako Mochi guys as mine. Anyhow, this chocolate sounds interesting! I don't remember seeing much nougat in Japan, so I'm glad Tirol is willing to put it on the market. It'd be great if they put out more of these bars, because there are some flavors that I've definitely wanted more of (Kinako Mochi, for example)!

Tirol doesn't give the history of individual products on their web site, but I have a sense that this bar may be a much older form of candy for them (due to the packaging) than the others.

I think it would be good for a greater variety of these as well, but I guess that their machinery may not be set up for that.

Yum i love nougat. I've never come across any Japanese chocolate with nougat, i'd be interested to try this though.

I use to eat the smaller bars in the Kansai area thirty years ago 1977-1979. For me, it was the best tasting chocolate available in Japan at that time. I can't believe they still have them. I was looking them up on a whim and found this web site. Thank you for taking the time to put it together!!!

Hi, SMLyon, and thank you for your comment. I think this is definitely one of the oldest items and that Tirol is unlikely to retire it. :-)

I was also in the Kansai region 30 years ago, 1978-1980. I loved this candy bar then, and I love it now. 2 years ago I was back in Japan and was looking for the Tirol chocolates. I could not find them in Tokyo, but I did find them in Fukuoka. I thought that was interesting.

Hi Alvin, and thanks very much for reading and taking the time to comment. :-)

One thing about living here that I have realized is that access to various foods is very limited. Even in my neighborhood (which is big, but still), I have found that the shops are so small that you find different inventory scattered everywhere. For smaller brands or old varieties of established brands, it's sometimes hard to find them at all. There is only one place in my area that always carries this Tirol bar, for instance.

So... where can I buy these little bars online?

So...where can I buy these little bars online?

Sorry, David, but I don't know about online resources since I'm living in Tokyo. You may want to check various Asian exporters and Asian grocers.

Sorry that I can't be more helpful!

For David-
A bit late but I have had great success ordering from Rakutan global and using tenso.com package forwarding. You can shop from stores that ship only within Japan. The package is sent to a Tenso.com address in Tokyo. They then forward it to you. Of course there is a service charge ( but pretty reasonable, about $10 US) plus international shipping. they have some good deals if you time it right though. like last month they had up to 5000 yen shipping fees shipped for only 1000 yen ( ie 4000 yen off shipping). the tenso.com customer service is fluent in english and very helpful ( though if you want to communicate with the actual shops you may wish to make use of the awesome Google Translate). As a huge fan of real Kyoto konpeito( the kind that has faint flavors like melon, sakura, etc) I was able to order a great package for my birthday with both konpeito and some various dagashi. Super fun, and MUCH , MUCH easier than I expected it to be!