Three of the biggest snack food producers in Japan each have their own plain milk chocolate bar. These types of bars would be the equivalent of a plain Hershey bar back in the U.S. I've sampled Lotte's Ghana and Meiji's milk chocolate bar so I decided I'd go for the trifecta and sample Morinaga's as well.

The Morinaga bar resembles the Meiji one rather closely both in terms of the outer wrapper design and the foil inner wrapper that is consumed by the oversized paper outer wrapper that fits it like pants that haven't been hemmed properly. Both bars look and feel cheap when you compare their packaging to the solid red box a Ghana bar comes in. The only difference is that Morinaga's currently sports a poster illustration by Raymond Savignac. There are 20 different poster designs meant to add novelty to the wrapper's design, but I only saw one design available at my local market. There's also a blurb on the bar about the "Angel Smile Project" which is designed to help out children through sales of chocolate around the world. 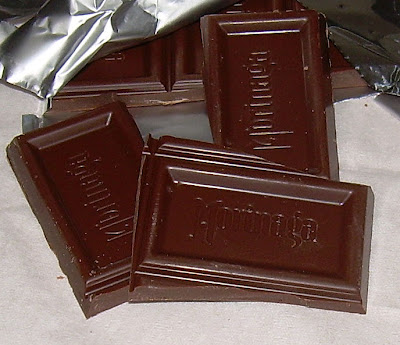 The bar looks and feels almost exactly like Meiji's bar with it being separated into 12 squares (at 28 calories a square for a total of 340 calories for the bar) and having the company's name pressed into each one. If they weren't two fairly great rivals, I'd wonder if the bars weren't made by the same company and distributed with slightly different wrappers. The taste is a little different though, so I'm sure they're not the same. The Morinaga bar tastes a lot like hot cocoa and seems to have less cocoa butter than its competitors, particularly Ghana which is a richly fatty bar.

The Morinaga chocolate is solid, but has a soft snap (hence the reason the squares tend not to break along the lines cleanly). There is an element of bittersweet chocolate in almost all Japanese chocolate (except plain KitKats) and often an aftertaste associated with it. This bar was no exception, but it wasn't as unpleasant as the aftertaste from the Meiji bar.

I will note that Morinaga is the only bar that overtly states that the cocoa beans they use are from Japan. Lotte's beans are from, rather unsurprisingly, Ghana, and Meiji doesn't say where its are from and just talks about the roasting process.

Now that I've had all three bars, I'd rank them as follows:

If you're in the mood for a plain chocolate bar, probably any of them would do if you had a glass of milk or coffee around as a palate cleanser, but if you have a choice, I'd suggest going with Ghana because it has less of a bitter aftertaste and is so rich. They all cost about the same, though I can get Ghana for about 10 yen (10 cents) less than the other two bars most of the time.

Ur blog is awesome! I love snacks!! My fav has to be Skittles, but I will partake in pretty much anything :)
-and I'd love to go to Japan one day--the things that make me look twice are always from there! :)

Hi, Pen Pen. Thank you so much for your kind words! I really appreciate it!

I don't think they have a version of Skittles in Japan, or at least not one that I've found yet. When I have the time, it'd be interesting to do a feature on matching up popular snacks in Japan with popular ones in other countries.

I don't like the look of those plain chocolate bars they seem to be really dark chocolate more than milk chocolate, and I often feel as if they taste bitter, more like coffee than chocolate.

I actaully like the bitter after taste in dark chocolate. Yummy.

Morinaga is inmy opinion, the tastiest of all chocolate bars in Japan. The sad news is that I was in Japan recently and I couldn't find a single bar anywhere,not lawsons,not family mart, not donki, not izumiya...