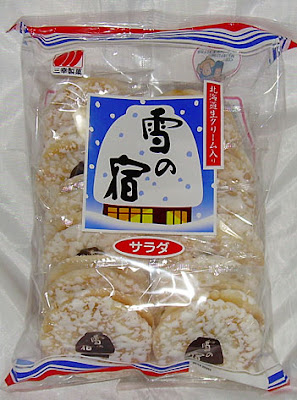 Back when I reviewed black soy bean sembei, one of the commenters (Sophia) advised me not to be wary of the frosted sembei because they have a sweet and salty thing going on. Since I'm a fan of chocolate paired with salt, I figured I'd take her advice and give them a try.

There are many varieties of frosted rice crackers and I decided to just go for what was on sale This large bag with 24 crackers (12 packs of 2) was 168 yen (about $1.60). Each cracker is about 7.5 cm (about 3 in.) in size. "Soft" sembei appears to mean that the crackers are puffier and have more air in them than the flatter, cracker-like crackers I've tried before. They're not actually soft though. They are quite crispy. They simply aren't as brittle as some other sembei. From a salted snack point of view, "soft" sembei are like cheese puffs and "hard" ones are like potato chips.

The company that makes these is Sanko Seika. They make a great many varieties of rice-based snacks. The company was established in 1962 and is headquartered in Niigata. I've noticed a lot of the food manufacturers in Japan are not based in Tokyo. I guess that they grew up around the agricultural concerns that their products are made from and had no reason to move to one of the more expensive metropolises like Tokyo or Osaka. Sanko Seika apparently is known among Japanese for their old television ads which featured a slogan which amounted to "oh, the Sanko wafer is smiling at you." I wish I could find an ad on YouTube, but all I could find was a pretty pointless video of someone inspecting the back of a packet of sembei slowly and opening it up. 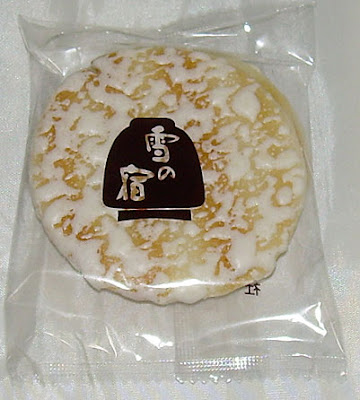 The front of the bag says "salad" on it. The combination of frosted sugary "salad" is one that doesn't necessarily sit well with me, but I figure it's a food-based adventure. This is far easier than a real adventure like, say climbing Mt. Everest. Because I'm 44 years old and have a bad back, funky sembei is about all I can manage on the adventure front. 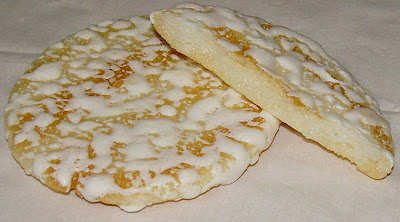 The ingredients for these sembei include rice, sugar, vegetable oil, salt, skim milk, gelatin, fruit milk oligosaccharides, lactose, light hydrolyzate, whipped cream, soy sauce powder, and seasoning. I'm not sure where any of that amounts to "salad" and I'm a bit surprised to see "sugar" as the second biggest ingredient after rice. Despite the high amount of sugar, there are only 70 calories for 2 crackers. Considering the size of them, 35 calories apiece isn't bad.

These sembei smell mainly like average rice crackers with just a hint of soy sauce. If you eat them with the sugary side down so that it hits your tongue more strongly, you get a good sense of the mix of flavors. It's a very difficult thing to describe because I guess the closest I can come to describing it is what it'd be like if you ate frosted flakes with diluted soy sauce and salt. It's very weird. That's not to say that it is bad, but it's definitely an acquired taste and unique.

I liked these, and I will definitely eat the remainder of the bag through time, but I don't think I'd buy this particular flavor again. It's not that I don't enjoy them necessarily, but I can't see craving them. The hard part for me is the soy sauce taste with the sugary frosting. I'm not a great fan of soy sauce to begin with, though I generally don't mind it.

The texture of these crackers is excellent and eating them from that viewpoint is very satisfying. I'm just not getting over the mix of flavors. I'd recommend trying them if you have a chance though. There's every chance someone with tastes that run differently than mine might enjoy them. Certainly many Japanese folks do.

This sembei was also reviewed at Snack Love.

It's not like a home-style teriyaki flavour is it? My mother in law makes teriyaki and she puts soy sauce, sugar, mirin and sake, and you can taste the soy sauce but it's quite sugary, so I imagine these tasting like that.

I can't say if it's like "homestyle" teriyaki because I've never had it, but I can say it's nothing like any teriyaki flavor I've had from restaurants here or from pre-made bentos or deli food.

I'm actually one of those that loves this (sugar frosted senbei).. but then again i am asian

Since sampling this, I've tried two other kinds of frosted sembei and I liked both of them (reviews to come). I don't have an issue with the idea of frosted sembei. I just didn't like this particular mix of flavors.