Back home (that'd be the U.S. for me), condensed milk is associated with baking, particularly in certain fudge and candy recipes. Very few people ever consider condensed milk as something that you consume directly on other foods like fruit or cake. In Japan, tubes of sweetened condensed milk are often sold next to strawberries because it is used like a condiment or dessert topping. 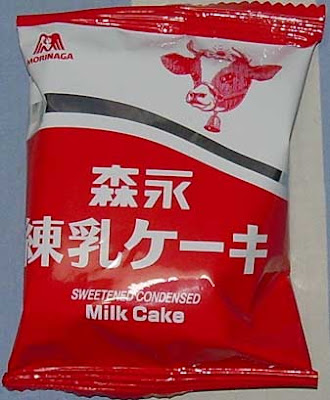 Personally, I find the taste of pure condensed milk a bit funky, though I know a lot of people (both foreign and Japanese) who really like it. One of my former coworkers, a British lady, loved to eat the stuff she bought in Japan right out of the tube. It was ambrosia to her. It is so suited to tastes in Japan that Krispy Kreme has made a "cream cheese" donut which is actually full of tangy sweetened condensed milk. I've had it, and I didn't care for it.

These were made by snack food powerhouse Morinaga. The web site listed on the box points you to their biscuits web site, but these cakes are not listed in the products section of the site they direct you to. I did find a generic listing on their main site, but it didn't provide much information. I can't track the history of this product, but I think these cakes are an old-fashioned product for them and I'm pretty sure that I have seen them around since I first came to Japan nearly two decades ago. I think this is one of those things which appeals to older folks with a sense of nostalgia rather than to the younger market in Japan. The box design, with an old-fashioned picture of a bastardized version of Elsie the Borden cow supports this idea if nothing else. 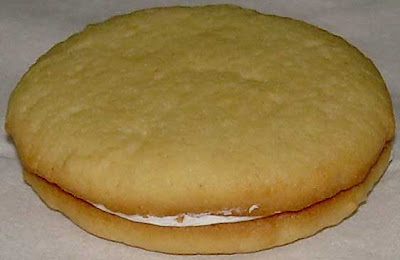 My husband picked up this box of 6 sandwich cakes at a discount sweets shop. Each is about 5 cm./2 in. in diameter. The cake on the outside is called しっとりケーキ (shittori cake) which is a sort of moist, soft cake. There are recipes for these types of cakes as well as cookies on the web. The main components are "soft flour", margarine, and sugar. These cakes are made with shortening instead of margarine and also include tapioca. The cake is a bit dense, but very soft and moist. 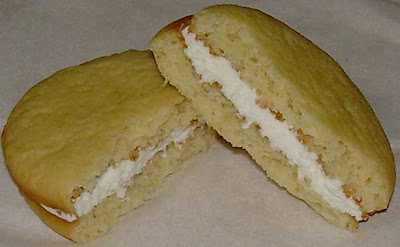 The cakes smell vaguely of a bakery. It's a nondescript smell you associate with baked goods rather than a particular flavor. The filling is creamy, lightly sweetened and tastes of milk. It doesn't carry much of a condensed milk flavor, but that is a bit of a plus in my opinion. The ratio of cake to filling is pretty well-balanced. The texture is very good and I liked these quite a bit. My husband, on the other hand, felt that they were fine, but that they were too bland for him and that the calorie to pleasure ratio didn't justify eating them. Keep in mind that he likes things sweeter than I and texture weighs more heavily in how much I like something than flavor. This is a good type of treat to enjoy if you aren't a fan of super sweet things. Each cake is a relatively modest 135 calories per cake and a box of 6 costs about 200 yen ($2.23).

This is the sort of thing I'd pick up on a whim if I was seriously in the mood for a cream filled cake. I'd also welcome being given one as a gift at the office if someone was doling out tea-time treats. I imagine a box of these would also be nice to keep on hand if you frequently encountered unexpected guests and wanted cakes that weren't going to go stale if they were stored for a long time to serve with tea or coffee on hand. The expiration date on these was about 4 months from when they were purchased.

Wait. Is the sweetened condensed milk that they sell next to the strawberries here actually just sweetened condensed milk like we would buy in a can at home? That makes me think that one could substitute theirs for ours in, say, fudge? Have you ever tried it? If not, I'm going to give that a whirl. :) I've found a few recipes that call for it, and I've just skipped right over them because I didn't think I could find that here...Eureka!

Oh wow, You know in Australia, we usually eat condensed milk straight out of the can or tube too!! I love it.

I found a great way to have condensed milk is to fry roti prata in the pan then put it on the plate and pour condensed milk over it. My Malaysian friends taught me that, it's delicious!

Not sure If I would like these cakes if they don't taste much like condensed milk though I'd give them a try. I asked Yasu but he said he's never seen them before. Probably before his time. :)

Hi, Allie, and thanks for reading and your comment. As far as I know, it is the same stuff. I never sampled condensed milk back home though so it's hard to draw a direct comparison. I believe it is the same, or at least similar enough to substitute.

However, I can offer no guarantees!