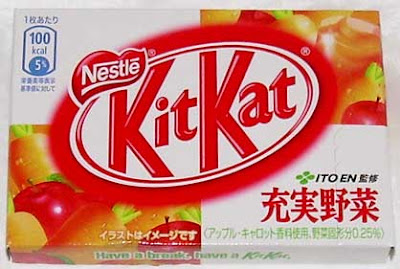 Naming this a "vegetable" KitKat isn't exactly truth in advertising. It does contain apple, carrot, grape, lemon, celery, green pepper, asparagus, Chinese cabbage, kale, and an increasingly diminishing list of vegetables and herbs. That being said, this really tastes like apple with an undertone of carrot. These are the only two flavors that are truly present. The bar smells like apple, and that is the dominant flavor, but the carrot comes through as a secondary flavor.

This KitKat is a joint venture between juice maker Ito En and Nestle Japan. The bar is likely flavored with the components of one of It En's juice varieties. I can't say that I've sampled them since I am a bit wary of Ito En after my previous experiences which ranged from "meh" to "yuck". I can say that there are quite a few vegetable and fruit juice combination drinks for sale in Japan and most of them favor the fruit end, just as this bar does. That makes the vegetables mere marketing tools rather than serious components. It's tantamount to pureeing one small, well-cooked broccoli floret and dropping it into a huge bowl of brownie batter and saying that the brownies now contain vegetables. 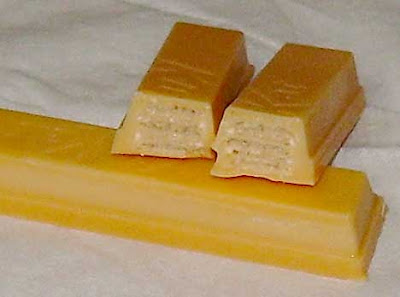 The advertising cheat aside, this bar is actually just fine. It's not stellar, but it is pleasant in the same way as the apple flavor KitKat. The carrot aspect adds a little more depth to the flavor profile and perhaps the overall fruit and vegetable combination mitigates some of the sweetness of this being a white chocolate-based bar.

I'd actually consider buying this again if the mood hit me. Mainly, you'd have to be thinking that something with apple flavor would be appealing, and that the texture of wafers would be good to go with it. There's something about this type of candy bar which makes it feel less heavy than chocolate, despite actually being the same calorie-wise as a regular KitKat.

This is also reviewed at Jen's KitKat blog here.

NO... veggie mix, now that is a surprise, I LOVE Itoen mixed juice, they are so rich and healthy.

I think they might have very juice possible in Japan, but carrot juice is my favorite and Mohare (sp)?

LOL, Only in Japan. If they tried to sell a Vegetable Kit Kat here in the states it would be relegated to Health Food Stores or Joke Stores. I really am curious to try some of these different KitKats. I absolutely love White Chocolate!!!

I love these flavored Kit-Kats.
Do you know if this is a seasonal? I understand most are limited edition or seasonal.

If there weren't so expensive to get in the States I would eat them all the time.

Hi, Greg, and thanks for reading and commenting.

These types of KitKats are usually regional and limited edition, but not necessarily seasonal. Some are seasonal, mind you, but those tend to be things with more traditional flavors. If a flavor is successful, it tends to come back. It it isn't, it tends to vanish forever.

For instance, marron dessert pocky went away during the summer, but have returned this fall because chestnut is a typical winter flavor in Japan. The KitKats that seem to come around again and again are kinako and green tea. I haven't seen a repeat of many of the fruit-flavored ones though except mango.