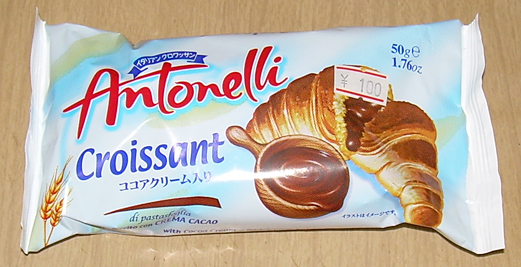 There's a multi-lingual message on the back of this package which says: "The pictures shown are pictures of a fantasy that does not represent the contents of the package itself." You have to respect that they put some truth on the package, even though I missed this message when I first purchased this and expected something a little closer to what was pictured. Absolute truth in advertising would require that this not be called a "croissant", though it is genuinely Italian.

Though these have Japanese writing on them, they are made in Italy. Though I tend to favor reviewing items actually produced in Japan, sometimes it's hard to resist an odd offering from another origin. I found these at Okashi no Marche discount snack shop for a mere 100 yen ($1.30) for a 1.76 oz./50 gram serving. If these are even halfway decent, that's a pretty good price. You can get 100 yen pastries in Japan, but most of them don't have a shelf life of about 7 months. This has an expiration date of May 26, 2012. 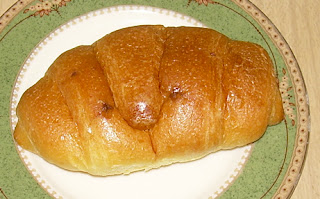 The "croissant" portion is really a sort of cake-like bread. It's like a slightly buttery hotdog bun. When I opened the package, I got a whiff of something vaguely familiar and the flavor also had an essence of something I'd had before. I realized that it was the same scent and taste that I'd had with some lemon chocolates a student brought me back from Italy some time ago. I thought that it was a part of the flavoring in those candies, but now I think it might be something else. It's not a bad thing, but it is very distinct. 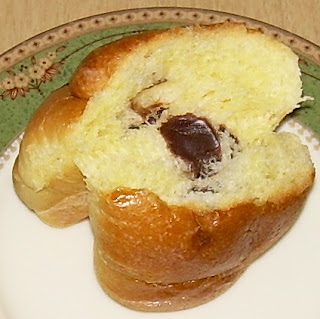 The bread is soft, but still seems a bit dry. This is common in bread products that are prepared for long-term preservation. It tastes slightly sweet and a little rich. This is likely from the high amount of egg in it. The cocoa cream filling is dotted through it and doesn't have a very strong chocolate flavor. Mainly, it adds a fatty dollop of texture and extra sweetness. There were also lemon and strawberry versions available, and my husband sampled both of them and found them reasonably good, though not amazing.

I try to accept products for what they are rather than what I might hope them to be. These are extended shelf-life (ESL) baked goods and it's unfair to expect them to be like a fine quality fresh-baked pastry. For something which you can put in an earthquake survival kit, toss into a backpack, or just keep in a cabinet or desk drawer for just that time when you just want a bread-based breakfast but don't want to feel pressure to eat it at any given time, this is actually pretty good. The bread has a nice flavor by itself, the filling has a decent texture (though there could be more of it), and it's only about 200 calories for a good-sized bun. It's kind of a good "bad" food. And, yes, I'd buy it again.

These are actually available at my local Dollar General store for $1.79. At least, the chocolate versions are. I did try one, but the chocolate flavor was so faint that I decided against purchasing any more at their current price. I also found the "croissant" a little dry. If the chocolate had been stronger, I would have been much happier and would probably have continued to buy one occasionally.

Nothing beats the real thing of a freshly baked croissant, but still these look pretty good.

I got some of these in at a budgens in Ealing.
Very odd flavour and smell. The odour is very chemical and reminds me of car freshener. TBH, these are revolting.
I Wonder if the ones i got were spoilt, but as far as i can tell they are the way their maker made them.
Avoid.