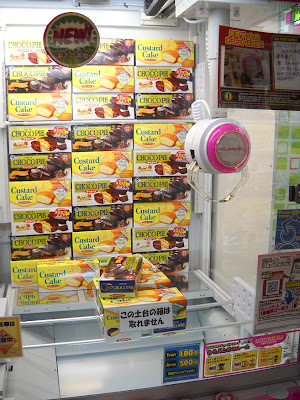 The unusual source of these snacks. This is after my husband toppled two of them into the prize bin.

One of the great things about my husband starting to play claw games for the fun and challenge is that it encourages me to sample snacks for reasons other than they happen to be on store shelves. Last week, we were out for a late night stroll and stopped by the local game center. They had a display of Lotte cakes in one of the machines and he put in a few 100-yen coins and managed to topple two boxes of cakes into the prize bin. Yay! Double review fun!

When he started playing the game, I was mainly interested in the custard cake because I've had the Choco Pies plenty before. In fact, I'm sure they contributed to weight gain in my early years in Japan. The truth is that I hadn't had this version of a Choco Pie (there are so many versions of "choco pie" in Japan) for a very, very long time. It's the most visible and probably the most popular, and it's not really a pie at all except in the same fashion as a "moon pie" is a pie.

Both of these are about 6.5 cm. (2.5 in.) in diameter and about 2 cm. (.8 in.) tall. They're smallish cakes, but enough to satisfy as a snack. The custard cakes are slightly lighter, weight in at 27 grams (about 1 oz.) and only 122 calories. Choco Pies are 32 grams and 163 calories. The feel much heftier with their denser cream filling and generous layer of chocolate coating. The extra calories come from a higher fat content as shortening is the second ingredient for the Choco Pie (third for the Custard Cake, which boasts more sugar). 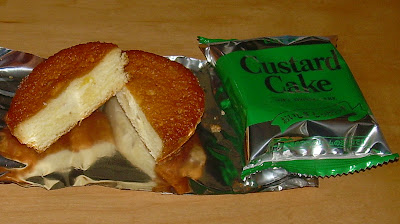 I sampled the Custard Cake first and the first bite carried a lot of the feel and taste of a cake preserved for long-term storage. If you've had a Twinkie or other packaged cake, you know that there is a particular flavor that sometimes comes along with such things. It's not offensive, but it's not natural and troubles some people. It doesn't really bother me, but those who are sensitive to such things may find these unpalatable for that reason alone.

The cake itself is, like many shelf stable Japanese cables, a bit dense and a little oily. The flavor is lightly sweet with vanilla, orange, and whipped cream flavors. The finish is very similar to that golden sponge cake which is the symbol for all that is nutritionally wrong in the world of packaged foods... the Twinkie, though it is not nearly as sugary and has a lot less filling than it's American cousin. The box touts the "fluffiness" of the filling, but a lot of it seems to be absorbed into the moist little cake. And keep in mind that this is "moist" from fat, not freshness. It's a very distinct difference. That being said, I liked this, but I'm judging it by a very particular standard. If you compare this to a real cake or even a fresh packaged pastry (like a Lawson Swiss cake roll), it falls short. If you compare it to something which you can put in the cupboard or your desk drawer and forget about for weeks or even months and indulge in in moments when you want a bite of cake, this is actually quite good. 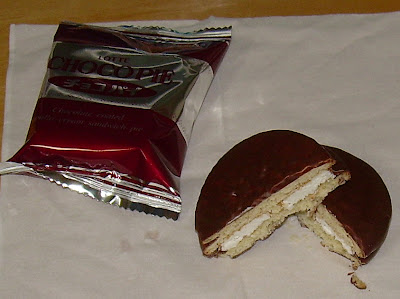 The Choco Pie is similarly being held to the same standard and also comes out on top. The cake is denser and the filling thick enough to provide fatty pleasantness on the tongue. There are distinct layers of taste for each component of the pie. The chocolate of the coating, the vanilla of the creamy filling and the floury cakey portion. This places it above and beyond the knock-off choco pie that I reviewed awhile back. While that had a pleasant graham cracker thing, it didn't have as much strong flavor as this nor as good a depth of flavor. This is absolutely a superior product compared to that one, but these tend to cost a bit more as well. Though I got these two boxes for 200 yen ($2.60) due to my husband's gaming skills, the retail price is generally between 250-300 yen ($3.25-$3.90) per box according to Rakuten and Amazon Japan (which sell them in 5 box lots). I've seen them in shops for 270 yen or so. The cheapie knock-off version is a mere 100 yen ($1.30), but I'd say these are worth the increased price.

If you're a fan of packaged long shelf-life cakes to toss into a lunch box, put in your backpack for a hike, or keep around for the occasional sugar-high, I think these are very good options. If you're fussy about your cakes and would rather have nothing if you can't have fresh, high quality cake, then these aren't likely to light your fire. For those who were fans of Hostess snack cakes back home, this is probably the closest you're going to come to a similar product in Japan. I liked these, and if the mood struck me, I'd have them again. For what they are (junk food), they're pretty good.

Both the Lotte Custard Cake and Choco pie are classic Japanese snacks, and some of my favourites.

It is familiar snack in Japan. It is very convenient to carry, especially outdoor, or office. Not sticky and each of them is packing. The taste is not so heavy. You point out the sweet is a cake preserved for long-term storage. It is fresh view for me. That is the right representation of this product, I think.

Thanks to both of you for your comments!

As you both point out, they're very familiar snacks and nicely packaged for individual consumption. I think that there is a place for all types of snacks, and I wouldn't mind having one of these in my backpack if I was climbing Mt. Takao!

i buy these here in the states. for some reason, the custard cake i get here has a liqueur taste to it. could just be me.

p00lriah: I get that same sense from Choco Pies. I think it may actually be a preservative. Italian snacks also have a different, but equally distinctive, quasi-liquor flavor sometimes (it tastes like limoncello). Sometimes having chemicals is bad for you, but not bad-tasting!

Patrice: Ah, I wish these were whoopie pies. They're not nearly so good! ;-)

Great article. I wish they came in machines in the US! We just reviewed the same snacks on our international snack blog. Take a look!

Pretty sure it's korean