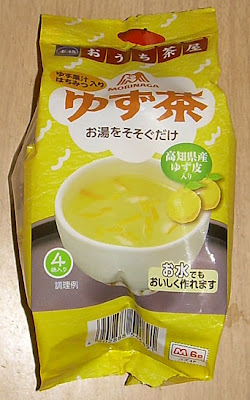 There is a tendency among those who are not native to a culture to take assertions from media as if the natives are taking them at face value. This tea, for instance, is marketed as something which is meant to help conserve energy in these days of nuclear-disaster-induced cutbacks (setsuden). Of course, it seems that winter isn't really a big time of year for setsuden as most trains, shops, and homes are heated to within a few degrees of the temperature on the surface of the sun, but the concept of saving power lingers in the hearts and minds of PR folks all over Japan.

When I read Morinaga's PR site about this product and the other variations that are on offer (cocoa and ginger tea), I thought, "boy, the Japanese sure are gullible if they think they'll heat less water using this type of instant tea as compared to making it themselves." I'm  making the common assumption that the Japanese aren't rolling their eyes at the ludicrous notion that they will heat less water to dissolve a brick of pre-made yuzu stuff than if they simply stir yuzu marmalade into the same amount of hot water. So often, this is the root of a lot of erroneous cultural beliefs. If the media says it, the Japanese must believe it 100%, right? After all, we believe it when commercials tell us that Pop-Tarts and Sugar-frosted flakes are "a good part of a nutritious breakfast". 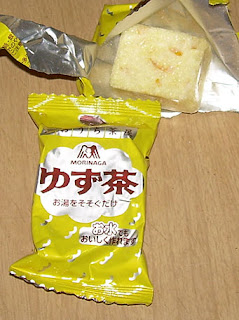 As an enormous fan of yuzu, a flavorful citrus fruit which is a cross between a grapefruit, a lemon, and an orange in taste, it may surprise my readers to learn that I had no idea that it was used to make tea.  I've been seeing enormous jars of yuzu marmalade on sale at local grocers and thinking that it looked like a tasty option for my morning repast, but the volume was such that I'd have to eat it everyday for a couple of months to get through it. It was only after buying this rather expensive (198 yen/$2.58) bag of a mere 4 half-cup servings of tea and doing some research that I learned that people are plopping spoons of it into mugs of hot water.

This caught my eye at a local supermarket, Inageya, as I was heading for the register. Most instant tea and coffee in Japan is chock-full of sugar and high calorie, but this weighs in at a modest 29 calories per serving. I don't often feel truly excited about trying a new snack these days, but I was quite enthused about this. It did not disappoint. As the instructions say, I removed a brick from its foil package and added 100 ml. (1/2 cup) of hot water. The brick fizzed up in a way that would make an Alka-Seltzer fanatic happy and settled in to make an intense yellow tea with bits of peel floating around in it. The smell is of heavenly citrus, unsurprisingly, and though this is called "tea", it has no leaves of the common tea plant (Camellia sinensis) in it. It is mainly yuzu and sugar in its purest form, but as this instant variety it has artificial sweeteners, potato starch and other unsavory chemicals to create the tidy little fizzing brick.

The taste of this is very intense and sweet. It packs a wallop in terms of both zest and a bracing sugariness. I can see how this would be the perfect pick-me-up after a walk in the brisk winter air and it would probably really help wake you up if you're tired. It's  not something that I could see relaxing and casually sipping at, but rather a slow drink that you take sips of and savor. Personally, I thought it was incredible, but I can see where others may find it too strong or too sweet.

My guess is that it'd be vastly more economical and possibly even tastier to make the tea from a jar of marmalade rather than these instant packets. One of these days (very soon), I'll buy a jar and try the real deal for comparison. However, if you've never had yuzu tea and just want to try it, this is a good way to sample a small amount rather than invest in a big jar of marmalade (and I've only seen relatively big ones). Also, if you want something to keep in a back-pack or a desk drawer, this would be the bee's knees. I can definitely see buying this again, though I frankly wish it were a bit cheaper.

I am a big fan of Yuza-cha and usually get mine from Korea. It is so easy to drink and great if you're not feeling well as a pick-me up :)

That's kind of strange, I've never seen that version. I've only been buying the big jars of the marmalade style stuff.

But I usually eat it like marmalade instead of us a drink.

It's a great mixer with a bit of gin and seltzer.

Japan-Australia: After writing this post, I bought a jar of Korean-made yuzu marmalade and made some tea with it. It's not quite as intense, except when you eat the yuzu peel, but very, very good!

Cybele: I was avoiding the marmalade (even for on toast) because I associate "marmalade" with the bitterness of orange marmalade (which I dislike). I've been missing out! Now, I want to eat it from the jar with a spoon!

if you want to try it without forking out for a big jar, just pop down to any Choco-cro and order a cup. they make their own brand and sell it at their shops too...we drink it when we visit each winter and even bring some back with us.

Hi, Sharon, and thanks for the tip! I love Choco-Cro (for their pastries), but never even gave the drinks a second look!