I knew that there were going to be options for some of my favorite Japanese snacks in America. One of the things that I had high hopes for was a tasty Americanized version of sembei or rice crackers. When I checked Amazon, there were quite a few versions of them sold packaged for the American market. Note that they aren't necessarily made in the U.S. These were made in China, which actually was sometimes the case for the snacks I had in Japan as well. Just because Japanese writing is on a package, it doesn't mean it was made in Japan. Many of the things I purchased were made in Taiwan, Korea, Vietnam, or China. This is because Japanese manufacturers take advantage of the same reduced labor costs as American companies do.

In fact, one little tidbit of information that many people who live in Japan don't realize is that there is a reason there is so much Aussie beef in Japan is that the cattle farms are owned by Japanese business people. Of course, it is still good for the Australian economy to have the farms in their country, but it doesn't represent the sort of opening of the domestic market that many people believe it does. The Japanese only allow copious imports from a country when they have a vested interest. Otherwise, it's rumors about pesticides and heavy restrictions. I'm not sure if that's the way it is in every country around the world, though frankly, it wouldn't surprise me if it happened like that to some extent everywhere. And these were made for a company in California so, that's a little support for my assertion right there.

Getting to the snack at hand, I've got a lot of options for rice-based crackers to sample here in the U.S. Even in the little markets I have access to at present on the San Juan Islands, there are a minimum of 6 varieties. Most of them, however, are all the same flavor, sesame. There's nothing wrong at all with sesame. I love it, after all, but I'm going to get pretty wistful for the wasabi, yuzu koshoo, and kinako crackers I could get in Japan if my selection doesn't widen when I leave here in about a month.

I found these crackers at a tiny little market on the South side of the island I'm on. It happens to be the second of only two markets on this one. I bought these at that place for two reasons. The primary one was that this little market had an interesting and eclectic blend of items from all over the world and their business wasn't exactly booming. I wanted to support them by spending my money with them rather than the bigger chain market on the other side of the island. The other reason was that they were pretty reasonably priced at $1.89 (153 yen) for a 3.5 oz. (100 gram) bag. It's nice to support the little guy when it costs less than supporting the big guy. Since I doubt my readers will be in the San Juan Islands, I'll mention that you can get them from Amazon, but I'd be surprised if markets all over the U.S. don't carry them. 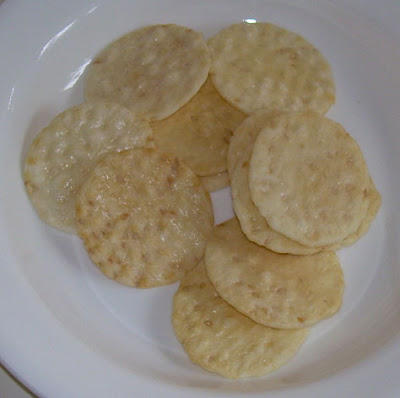 These crackers don't smell like much of anything though they do have the vaguely rice crackery smell. They do have that same baked rice flavor that I associated with rice crackers in Japan, and there is a pleasant sesame seed flavor, but it's the flavor that you get on the top of your hamburger bun. That's because these are made with white sesame seeds, not the black ones that are more common in Japan. Since they are mildly salty, the delicate sesame flavor is able to shine through. The point on which these really fell short for me was the texture. They are hard and slightly tough. I'd wager this is because they are baked rather than fried and contain less oil than Japanese sembei.

While the bag does not say anything about how these are made, the fact that 18 crackers have only 120 calories speaks volumes. Each cracker is 2 inches/5 cm. in diameter, so they aren't exactly tiny. The ingredients list is also quite short with rice, white sesame seeds, sunflower oil, and maltodextrin as the main ingredients and less than 2% sea salt, sugar, and kelp extract. I don't know if that actually makes them "healthy", but it doesn't look too bad.

I wouldn't buy these to just eat by themselves because I've been spoiled by the light, crispy texture that comes from Japanese "hard" sembei (their way of referring to deep-fried, crispy, thin rice crackers). However, they do make a good cracker to accompany cheese, dips, etc. I also think that other people may be a bit less fussy about the slight toughness of the texture than me. Eating these makes me appreciate more than before the delicate balance between the taste and texture of a product and the "healthiness" of it. These are definitely lower calorie than Japanese rice crackers and have a nice flavor, but they aren't quite as much fun as the less healthy and stronger tasting rice crackers I could get in Tokyo. Still, I'd buy them again.

When we were in Australia last year we were greatly surprised to find Sakata Senbei crackers. We tried them, but didn't really like them. They were teriyaki and were entirely too sweet.

However, my husband did bring a packet of them home as a sort of reverse souvenir! These were actual made-in-Sakata (the next city up the coast) senbei.

So, they were made in Sakata and sold in Australia? :-)

I guess the formulas get changed for export to suit the tastes of the market. That being said, there were some sembei in Japan which were too sweet for me, but I think they were some of the stronger salty sweet combos (which often worked, but not always).

cant' find these on the amazon link...would u happen to have the manufacturers address or website please??

Hi, Gerald. I did a search and it seems like the product has vanished from Amazon. The company's web site is here:

Their rice crackers are not listed at present, unfortunately. They may be revamping the line, or this product may have been discontinued (which would be unfortunate).