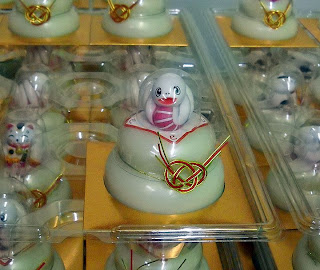 Next year is the year of the snake on the Chinese astrological calendar. That means convenience stores and markets all over Japan are selling shelf stable packages of "kagami mochi" with cute little plastic figures of snakes on them. Only in Japan could they make a slithering fanged menace that is the stuff of Indy Jones's (and my) nightmares look adorable enough to want to collect a figure of it.

If I had been paying attention, it might have been nice to collect all 12 plastic figures by buying these cheap and not very tasty bits of mochi each year, but I only picked a couple up when I was in Japan and the figures I got (a tiger and a dragon) didn't make the journey with me. Oh well, they are just cheap plastic figures, and the mochi from these offerings was really pretty much the worst. though no inedible, it didn't compare to the fresh stuff.
Posted by Orchid64 at 8:00 AM

I am such a sucker for cute trinkets and the sad part is I know better. So I find myself having to weed through my useless junk to get rid of clutter and then feel bad about it. I try hard not to pack-rat like my mom, I just have to be stronger about getting things I don't need. That snake is super cute though.

I broke myself of the "stuff" habit after years in a tiny apartment and feeling suffocated by all of the things I hung on to. Having digital storage media helps a lot - take a picture of the item to remember it, and then let it go. In most cases though, the junk we held onto wasn't even about sentiment. It was about having spent money on something and then not using it enough and feeling guilty about getting rid of it. I learned that you don't extract added value by keeping something in storage. ;-)