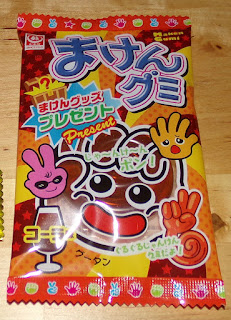 This gummy's packaging lets you know very well that it's made for kids, especially those who think they need to put up a peace sign any time a camera is pointed at them. That is something that I always associate with life in Japan and I can say that I haven't seen someone do that since returning to the U.S. No, instead of peace signs, I see duck faces and people sticking their tongues out or pulling idiot faces by treating their mouth like they were trying to form a balloon animal with it. I really miss the peace signs.

Though the candy's fingers appear to be making a peace sign, it's actually scissors from a game of rock, paper, scissors (jan-ken-pon). If you look carefully at the packaging, you'll see that the main figure is a fist and surrounded by the "rock" and "scissors" illustrations. Also, the bottom is a parade of rock, paper, scissors hands. You can see that my intro was totally misplaced, but it did allow me to criticize the way young people in two different cultures take their pictures taken.

This is produced by a company called Sugimotoya. It specializes in the sort of boring candies that your grandmother either keeps in her purse for her own enjoyment or disappoints you with. I'm talking about hard candy, yokan, jelly candies, and gummies. Among their more dubious offerings are tomato and umeboshi (sour pickled plum) gummy candies. They also sell gummies which include vegetables like asparagus, carrots, and onions. I guess they want grandma to feel like she's giving you healthy treats. For a full catalog of the horror, you can go here and download one. 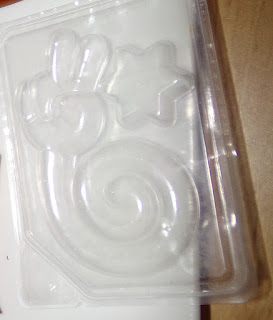 This is the perfectly molded plastic that held the floppy gummy. I'm guessing it was made by pouring the mixture directly into this mold than sealing the back with plastic.

When I peeled open the, frankly impressive, packaging, I was hit with a chemical smell which was not in the least bit appetizing. After laying the gummy down on the plate in order to get a picture of it, I discovered why this was packaged as it was. It adhered like glue to the plate and was hard to peel off to actually eat. That, combined with the scent, made me seriously concerned for what this might do once it hit my stomach, but I have to make sacrifices for this blog. 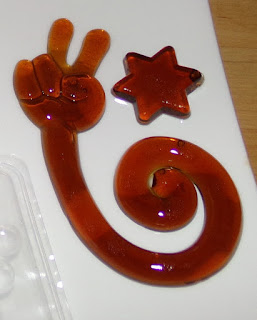 The gummy tastes very intensely of cheap cola flavor. It was as if someone took a generic store brand cola beverage and boiled it until it was distilled down into a nasty, super intense poor quality cola flavor. If you've ever had a really cheap off-brand cola that has gone flat, you'll have some notion of how this tasted. It was also oddly sweet and had a strange artificial taste due to the use of sorbitol.

This stuck to my lip a bit going in and it was very firm and chewy. Like Japanese marshmallows, it is quite rubbery and chewy. This was actually slightly worse though as it had a consistency closer to that of a gummy worm.

This was frankly a pretty terrible way to consume 46 calories, but I have never met a cola-flavored candy that I thought was decent, let alone good. It looks amazing and is perfectly formed, but your enjoyment ends the second it enters your mouth (provided that you can scrape it off any surface you place it on). This wasn't inedible, but it really wasn't enjoyable. I think I could have done better using this as a sticker on mirror in a public restroom and freaking people out. It certainly would have adhered well and is of a color that may make people wonder where such a curiosity came from.

Source: Oyatsucafe "Dagashi box" (part of a $15/month subscription box)
Posted by Orchid64 at 8:00 AM