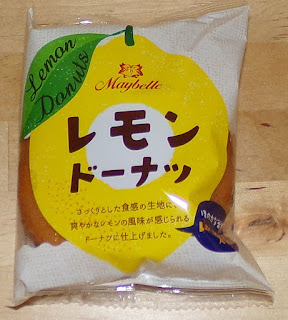 I was both looking forward greatly to this donut (because it's lemon!) and wary about how it was going to be (because, Japanese). I am not a huge eater of donuts, but I did find that packaged donuts in Japan had some very predictable problems. It's not that American shelf-stable donuts are any great bargain either, but they don't suffer from the same distinctive issues as Japanese ones. The only one that I ever really craved and ate multiple times was a "rosette" donut. It resembled an old-fashioned donut and it was more about texture than anything else. On rare occasions, I still crave one, though not as often as I crave a fresh "angel cream" donut from Mister Donut. That was my one, true, and thoroughly complete donut love. All others pale in the face of it and none will ever measure up to it. Sigh.

It probably isn't great to ponder the best experience you ever had before contemplating the new one before you, but here I am. It's like remembering the first time you saw the original "Star Wars" movie just before you saw that abomination with Jar Jar Binks with the hour-long pod racing sequence. You're just setting yourself up for deep, deep disappointment. 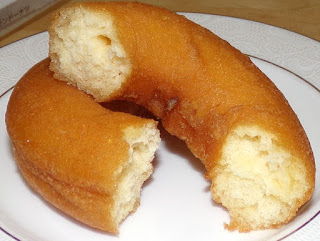 This is a classic shelf-stable Japanese donut, and, in this case, "classic" isn't a good thing. The defining characteristics of one of these confections is that the exterior is slightly greasy so that you can't eat it without getting a film on your fingers and the interior is oddly oily, but still so dry that you need to have a beverage along with it so as not to feel your tongue has just wandered vaguely through a small desert.

The best part of these was how they smelled. The fragrance was that of subtle lemon and that familiar smell of "baked goods" that you get when you walk into a bakery. There are some very sparse bits of candied lemon in the donut, but not nearly as many as would be nice. These bits don't yield a whole lot more lemon flavor, but have a nice sugary crunch.

This is made by a company called Maybelle which makes a variety of products that include both waffles and donuts. Their lemon donut is sold in a case which is labeled as 8 x 8 and I'm not sure if that means you get 8 boxes with 8 donuts in each or if that refers to box size. I couldn't locate a price, but this does look like the sort of thing you could pick up at a convenience store for 100-200 yen or get in a large souvenir box  at a department store (like for between 1,000 and 2,000 yen).

I'm glad to have tried this and for it to have been part of a shipment of a box from a Japanese snacks subscription service, but I have no desire to have one again. It's the sort of thing that, in the old days when I was living in Tokyo, I would have grabbed on the run while my husband and I were out on a sojourn visiting a distant area because it was better than anything else at hand when there was a limited selection. Also, it's the sort of thing that the idea of how good it will be will ensure that you forget how it really is.