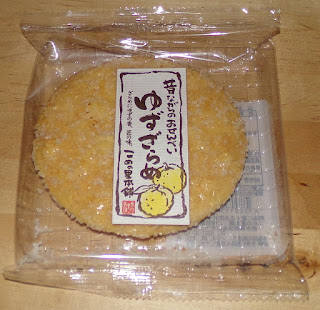 One of my students used to come for her lessons after working and it was close to dinner time. This sometimes benefitted me because she would bring some treats with her and share them with me as we talked. I would ask her occasionally if she was hungry during the lesson due to the timing and she would say she was on rare occasions, but often said she sated her hunger with a rice cracker (sembei) and some tea before the lesson.

I've sometimes wondered what food holds the same place in American food culture as sembei does in Japan. Nothing really quite functions as the same placeholder, though I guess cookies come closest. The main difference between a cookie as a snack and a rice cracker is likely about 200-300 calories and the sweetness. In modern times, granola bars may come close to being a similar snack, though they are still sweeter, more caloric, and less satisfying in terms of texture.

The main benefit of sembei as a snack is that it carries a lot of satisfaction in a small, crunchy package. Most commercial crackers in Japan are sold in single, individually wrapped plastic packets if they are large like the one I'm reviewing today or in double packs if they are small like the ginger frosted sembei I bought a warehouse load full of (and still am working my way through). The main down side is that they are high glycemic snacks despite their low calorie profile so they will send your blood sugar on a roller coaster ride. I'm guessing having tea with them may help people in Japan feel full after a couple of sembei despite the glycemic index, or that they simply have less reaction to processed rice than Westerners who aren't eating a pound of rice a day as part of their regular diet. 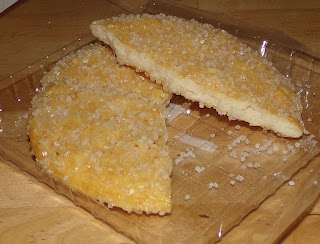 This particular cracker is made by a company called Komenosato, which specializes in making a variety of old-fashioned rice crackers. They market through Rakuten who say they'll ship worldwide and these crackers are 100 yen each (about a dollar in the U.S. depending on the exchange rate. It's funny that they'll let you buy 12 for 1200 yen or 1 for 100 yen rather than offering a discount for buying a lot, but this is pretty common in Japan.

In terms of flavors, this has a bit of a vinegary flavor upfront and then you get a nice hit of yuzu following by some sweetness from the large grains of sugar on the surface. It definitely has a "fried" flavor and a bit of oil on the outside. This is what the Japanese call "hard" sembei which is not be to confused with "crispy". This is dense and brittle and crunchy. The flavor just adds up the more you eat it and the yuzu flavor becomes more intense, the vingery and baked rice flavors start to fade, and the sweetness starts to accumulate.

I loved this. If I could get a whole box for a decent price, I'd likely buy several. It's mainly the combination of how crunchy it is with the ever-increasing citrus notes of the yuzu and how the sweetness seems to allow it to bloom as you eat it. The only downside is that, by the end of eating such a big cracker, the sweetness gets to be a bit much.

If you're interested in these, you can try to buy them through Rakuten, though I believe you'll need to go through the Japanese interface as I couldn't find them listed on their English language site. You can also, at least for the time being, buy them for $2/cracker on Bokksu's market page, but I'm guessing that won't continue for too terribly long. They'll sell out and that will be that. Much to my surprise, you can buy these on Amazon for $26 for 12 crackers. That would seem the most expedient way to purchase them, though it is pretty expensive. Still, if they're around in the future, I could see myself splurging on a box. The seller, Rice Village Honpo, carries all of the Komenosato crackers so one can sample all of them.

Oh! I just ran into these for the first time at a penny-candy store in Tokyo last month, and, fellow yuzu fan that I am, just had to buy one. I regret not buying more (no matter what my hips say).

I'm pretty sure they didn't cost a penny. How much did one cost you? In my case, I would buy a lot and ration them over time (I'm pretty good at that) as they are so expensive to get here!

I just checked the receipt (yay for tax deductions); it cost Y130 (or about $1.15 at the time) at the dagashiya in the Solamachi mall at Tokyo Skytree, which may even be a pricier location. Sure, it's not as cheap as my son's favorite, the Y11 Umaibo, but talk about bang for your buck--or yow for your yen, as it were.

Keep up the great work!