When I bought the black sugar kinako KitKat, I was actually not paying much attention. I had thought I was buying a bag of "plain" old kinako KitKat. For those who don't remember from previous posts, kinako is toasted soy bean flour which is reminiscent of peanut butter in flavor, though not exactly the same. The prospect of a peanut butter KitKat was a pretty exciting one, and I was disappointed that I'd ended up with a funky combo of black strap molasses and peanut butter.

I hadn't seen the plain kinako bars around my area, but my husband found a "bar" (as opposed to "finger") version at a convenience store near his office. This was actually my first experience with these bigger KitKats and I must say that I like it better than the regular ones. The main benefit of it is that the wafer to chocolate ratio is better suited to my personal tastes. I like less sweet chocolate coating and more wafer and that's what you get with this. 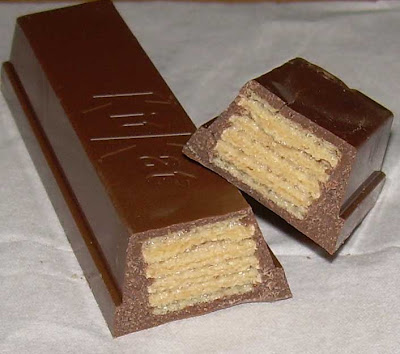 The bar smells, unsurprisingly, vaguely of soy flour and peanuts. I think the peanut flavor associated with kinako has something to do with how they are both roasted. There are no actual peanuts in this. If you've ever used soy flour in your cooking, the scent will be familiar, though this doesn't smell quite so powerfully of soy as the flour does. The toasted soy flour flavor goes well with the milk chocolate coating and the wafers. Most of the soy flavor is concentrated in the wafers, so at first you mainly get the chocolate and the kinako flavor develops as you eat more of the wafers. I love how crispy this is. It took some will power not to eat all 237 calories of this bar at once, but I managed to stop at half and set the rest aside until later.

This definitely carries more of a soy taste than the Tirol kinako premium chocolate, which really was much closer to a peanut butter flavor. It's still very tasty and I would definitely buy this again if it were available locally. If you absolutely hate soy with the power of a million suns, you probably won't like this. If you can tolerate it, then you may enjoy this despite not having a particular affinity for soy. Among the various flavored KitKats I've tasted, this is one of the very best.

This is also reviewed at Snack Love.