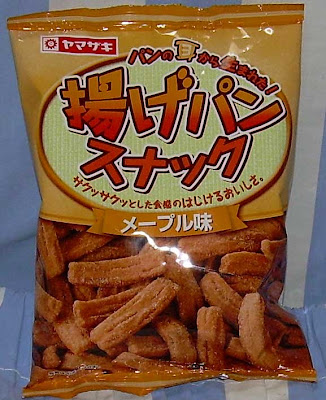 Sometimes I try something which is abysmally bad and I figure that someone somewhere has a very different sense of taste than I. I figure that any sort of passionate response to the taste of something probably means the product was test marketed to people who are unlike myself.

This is not one of those times when I have sampled something I hate. This is a time when I wonder if someone bothered to test market something because taste testing would certainly have revealed that no one could possibly care to eat this product as anything than a desperate last choice for sustenance. The indifference I feel to this snack is immeasurable.

This was made by Yamazaki Baking Company which I know well for it's packaged baked goods, its own chain of convenience stores, and for having a partnership with Nabisco in Japan. In the early 90's, they were also involved in a flap about potassium bromide use in their products and the detrimental effects on the health of anyone who consumed them. Despite their spotty history, I'm a great fan of their cake products, especially their mont blanc which is commonly sold in 2-packs in supermarkets here. In fact, any Yamazaki cake product which incorporates whipped cream tests my self control. Given the companies history of pleasing me as a customer, I wasn't expecting this item to underwhelm so awesomely. 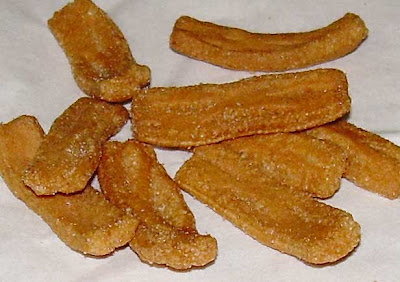 I have to ask myself who thought this type of product was a good idea. Didn't they actually eat it? When I consider the possibilities, I'm left with only one conclusion: this product was created to use up bread scraps created by the company's bread production. It's the only excuse I can come up with. These things are little more than bits of lightly fried, dried out bread. I wonder if someone at the company got a big promotion, or at least a pat on the back for coming up with a way to recycle leftovers by making these edible packing peanuts.

They taste like stale bread with a few molecules of flavoring added. Despite what appears to be a liberal dusting of spices of some sort, these have very little flavor. They have the barest, and I'm not exaggerating, hint of something sweet, but no maple flavor that can be detected on the human tongue. They smell like a mixture of maple and nondescript fried food oil. I'm guessing this comes from the fact that they're fried in pork fat. "Maple sugar" is an ingredient, but it's very far down the list as one might expect from something which is barely detectable. About the only good thing I can say is that they're very crunchy as promised on the front of the bag, but I'm guessing any sliver of stale bread you've left lying around would be too if you tossed it in a pan of butter and fried it and rolled it in maple sugar. In fact, I recommend that over eating these. It may be worse than these. It may be better, but it can't possibly be as lame.

On the bright side, each 55 gram bag has 266 calories. Since no one is ever going to eat these, even if they make the mistake of forking over 99 yen (about a dollar) to buy the bag, that's 266 calories that you won't have to worry about burning off on the treadmill.
Posted by Orchid64 at 5:00 AM

Oh...this looks terrible. You're a brave woman! Ten stars for trying it though. :)