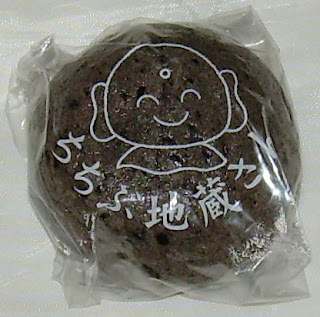 I don't travel much in Japan anymore either for pleasure or for business. There are several reasons for this. The big one is that I've been in Japan for a long time and therefore have already spent hours and hours of my life exploring many places. It's rather a shame in some ways because when I used to crack open all of the nooks and crannies of various areas, I never paid heed to the food. I was mainly in it for the second-hand record shopping, looking for rare collectibles to add to my personal booty or to sell to others (and this was before eBay).

Fortunately for me, one of my students travels for business and has been kindly picking up regional sweets for me to try. I'm immensely grateful for her efforts and this lovely bit of manju (traditional Japanese sweets usually made with beans) is courtesy of her. She got it in Chichibu. That's a city which rests in a bowl created by surrounding mountains in what might be considered a suburb of Tokyo called Saitama. In the summer, my student tells me that this topography causes Chichibu to be a sweltering nightmare. She bought these bean cakes in a nondescript 6-pack while killing time and sweating. I'm the lucky recipient of one of them. 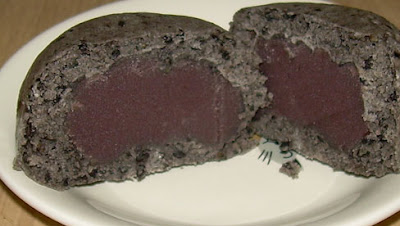 This picture was lightened a bit to show texture and composition better.
The picture on the package is a mascot for Chichibu, O-jizuou-san (地蔵さん).  The cartoon pretty much tells you that this is the name of a Buddha representation. I don't know how much these cost, but I don't think they were outrageously expensive or very cheap. If I had to guess, I'd think 6 of them cost between 500-800 yen ($5.77-$9.22). The ingredients list included sugar, sesame seeds, and red beans.

These smell heavenly, like sesame seeds but with a real nutty and rich aroma. The texture is also lovely. It has a moist cake with an almost fudge-like bean filling (minus the sense of fattiness). The beans are very finely ground and form a ganache-like filling. Based on the sheer volume of black sesame seeds, it's no surprise that this is very flavorful. There's a good rich sesame flavor complimented by the mildly sweetened red beans.

The sesame adds a great nutty flavor and the occasional meaty nut-like textural element. The only drawback is that the seeds are whole and you can get them stuck between your teeth. However, this is really a great presentation of classic Japanese sweets elements (red beans and sesame).

My student called this a "grandmother's snack" and she said that she didn't feel that it was really exclusive to Chichibu. She felt that one might be able to find similar cakes in other areas of Japan. I'm sure she's right, but I don't know if they are all going to be as well made as this one was.

I am totally hooked on anything made with black sesame, my favourite being the Goma Tamago - omiyage available in Tokyo!

I also am completely in love with black sesame goodies! My favorite is goma dango!If anyone has not tried black sesame sweets you should definitely give them a try.

Thanks to both of you for weighing int on the greatness of all things sesame!

anchan: I like white sesame as well, though the black has a richer flavor for sure.

Robyn: I'm going to try some goma dango next time I see some vendor selling it fresh!