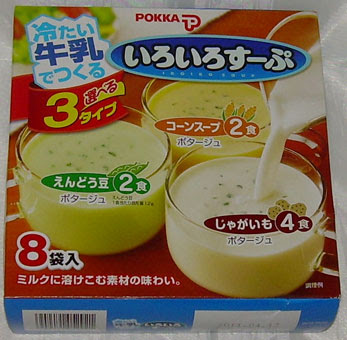 I pay a lot more attention to new products now than I have ever done since coming to Japan. In fact, it is interesting how doing this blog has altered my focus on a daily basis. It used to be that every time I went to a store, I was drawn to the imports to see if any old favorites had somehow made their way to these shores. Now, I'm drawn to the domestic new products for review fodder. This is one of the many ways in which this blog has helped me develop a renewed appreciation for living here.

I noticed recently as the rainy season and summer heat has poured on that instant soup designed to be prepared and consumed cold is on many shelves. I chose this Pokka Iroiro (various) soup because the three flavors were all appealing to me - potato, corn, and pea. A lot of the other cold soups were in one flavor only, or contained mushroom or other flavors that were less appealing. I found this particular variety pack at Peacock supermarket for 298 yen ($3.37).

Pokka, incidentally, is a very well-known manufacturer of prepared foods and canned beverages in Japan.  They have their own drink vending machines and sell "Black" and "Demitasse" brand coffee among other drinks. They also sell lemon juice, several types of instant soup, and are the only domestic maker of croutons that I ever see on the market shelves. As someone who can't abide a salad without croutons, this is something that I notice. The company was established in 1957 and started their business selling artificial lemon products. 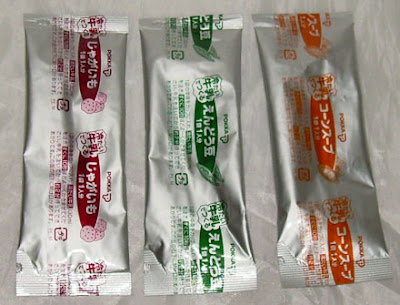 From left: potato, pea, corn.
One thing I didn't notice, though it says so right on the box, was that there are 8 packets, but 4 of them are potato and there are only 2 each of corn and pea. I never understand why they feel it necessary to be as disproportionate as possible and to always offer fewer of the more appealing flavors. I like potato just fine, but it's a relatively bland offering. I'd prefer more corn (of course, who wouldn't!).

To prepare this soup, you measure 130 ml. (about 2/3 of a cup) of milk into a cup and add in the powder. Wait 2 minutes then stir it up. I was very careful to add in the exact amount of milk because I didn't want to risk messing up the concentration of the flavor. Note that I used low-fat (.5%) milk. 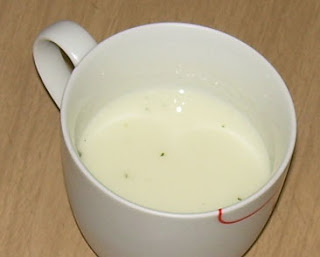 Potato (42 calories for the powder):

This smelled and looked a lot like usual instant potato potage soup. Potage, incidentally, is a thick, creamy soup usually made with onion, garlic, butter, and potatoes. The texture was a bit funky though. It was rather lumpy, like soft bits of instant mashed potato flakes suspended in milk. In fact, the milk flavor really showed through this and Japanese milk is not one of my favorite things. On the plus side, I could taste some of the savory elements toward the end of a taste of the soup. The flavor hit me in three waves pretty much - potato, milk, chives and onion-garlic seasoning. This was decidedly so-so. I think it would have been better with tastier milk, but the texture was still pretty sub-par regardless of the dairy flavor. 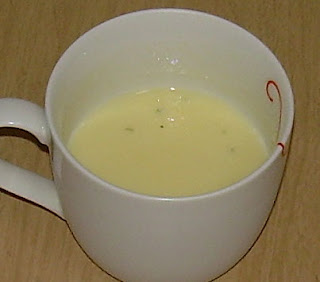 Corn (39 calories for the powder):

The corn dissolved more smoothly than the potato, though I did have to smash some globby bits up with my spoon. It was also dominated by the milk's flavor, but did carry some of the classic flavor of sweet corn as you experience it in Japanese instant corn soup. My main problem with it was that it tasted quite sweet, almost to the level of feeling like a dessert. There's a smooth, rich sense to the hot version of this soup which was completely absent from this cold version. It tasted more like corn-flavored milk than actual corn soup. It wasn't bad at all, but definitely not worth the expense or even the handful of calories. 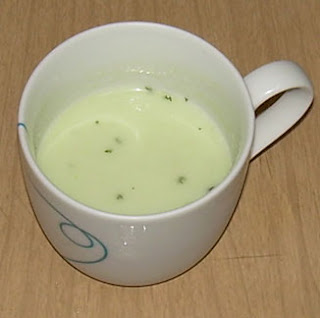 This one smelled the strongest, and was the least dominated by the milk flavor. Mostly, I could taste a bit of the pea flavor at the end of a sip. This is rather on the sweet side, and the most palatable of the flavors, but still not incredibly impressive. Like the corn soup, there is a rich sense of savoriness that is usually present in pea soup which was missing from this. Like the potato soup, the texture was rather lumpy as if the powder couldn't fully dissolve in the cold liquid.

The question about this soup for me initially wasn't really going to be mainly about the flavor, though obviously that is a part of it and this failed every time because the milk flavor dominated. I know what powdered instant soups tend to taste like and I actually like a lot of the hot ones in Japan (though, frankly, they are expensive for the amount you get, so I rarely have them). The question was more about the texture and whether or not potage-style soups were going to be appealing when cold. The answer for me was a big fat "meh". Given the choice, even in summer, I'd take a hot version of instant soup over one of these cold ones for the texture and a flavor profile undiluted by Japanese milk's weirdnesses.

As an experiment, I decided to alter this a bit to see if it could be better. For one thing, I made the potato version hot with 50% milk and 50% water. I wanted to see if the flavor of the soup asserted itself more prominently if there was less milk to dominate. The result was strange. It still didn't have much flavor, but at least the Japanese milk wasn't overbearing when I made the soup. The result of the heat was the most interesting thing. The potato soup got super, duper thick. I didn't want to water it down though because it was so weak anyway. I think the formulation must be different than usual instant soup to make it dissolve in cold liquids and putting it in hot liquid causing it to go a bit nuts. I also tried the pea flavor cold with 50% milk and 50% water. That was actually a better, but not exactly impressive result. I could taste the pea flavor better, and the weird milk flavor wasn't as strong, but it still wasn't great soup.

The bottom line is that these really aren't soups so much as milk flavoring powders. The overall taste experience is akin to making cold chocolate using Nestlé's Quik (Nesquik) or malted cold milk beverages using Milo. If you ever thought you'd enjoy a glass of milk more if it was corn, pea, or potato flavored, these are for you. Otherwise, I'd give them a miss.

I actually fully enjoy instant soup! I always have some in my desk at work as stand-by, quick snacks. However, I've never been a fan of cold soup. I can understand the appeal when living where the weather is quite hot and humid, and one needs something cooling, convenient and relatively inexpensive. Then again, I think I'd still sacrifice the expense to make or buy a nice salad over having cold soup...LOL!

I find myself looking forward to your reviews every single day! Thank you for creating this blog. :)

Thank you for your kind words, and for taking the time to comment, Dani!

When I was working in an office, I liked to keep corn soup packets around! I do enjoy powdered soup, just not this particular variety. ;-)

Yuck, that sounds disgusting. I'm not a big fan of soups, especially instant ones. I usually prefer homemade.

Just curious, but what motivated you to want to work in Japan? I've always been curious reading your blog.

Thanks to both of you for taking the time to comment!

In regards to why I came to Japan, the truth is that initially I came because my husband wanted to work here and I came along with him. I know that's a pretty boring answer, but it's the truth. ;-)

I really enjoy your writing style! The last few lines of this post made me laugh out loud. I grew up eating Japanese snacks and still pick them up occasionally at our local Japan Town or have them when my grandparents visit, so this strikes a nostalgic chord as well. :)

I recently bought some pumpkin flavored breakfast cereal/soup that has the exact consistency you describe here "It was rather lumpy, like soft bits of instant mashed potato flakes suspended in milk." It also wasn't so much bad as not terribly good. Anyway I thought of you when I was drinking my breakfast.

Ikkin-bot: There's something really nice about someone saying they think of me while having their soup! It means the reviews are memorable. ;-)