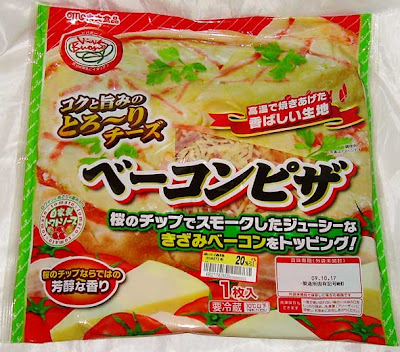 When my friend April Marie mentioned having a personal pizza for under 600 calories, I developed a craving for pizza. She was kind enough to share her information about the pizza she had bought on her blog, but I couldn't find the Nippon Ham pizza that she was eating at my local market. Once one gets a craving though, it's hard to escape it. I picked up a similar looking pizza from Marudai, maker of a good many prepared foods including various meats, yogurt, and, of course pizzas. 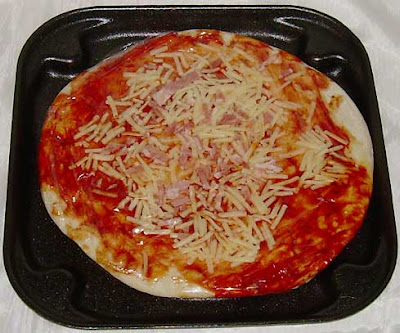 My Marudai bacon pizza had one virtue that April Marie's didn't and lacked one that hers had. This pizza was only 505 calories, but she said hers was "delish" and mine certainly was not. The size of the pizza is quite generous at about 8 inches (20 cm.) in diameter. In fact, I could only eat half of it at once. 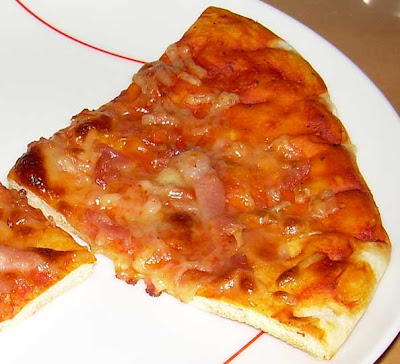 The page for this pizza claims it has "plenty of shredded bacon", but it doesn't have plenty of anything except sauce and crust. There's also supposed to be wine and clam in the sauce, but I couldn't really detect anything. The sauce was fine though. It has a pretty strong flavor, but the problem is that the sauce is almost all that can be tasted. The cheese is flavorless and after the pizza cools off, it's like a plastic layer on top. The bacon is so sparse as to present a simple ham aftertaste. The crust is soft, but inoffensive.

This pizza wasn't terrible, and I will eat the other half of it. That being said, it wasn't even as good as the 100 yen tuna mayo pizza that I got from Lawson's. I certainly wouldn't buy it again because I like my pizza to have more than a smattering of cheese on it.