If I didn't write this blog, there is every chance that my 4:00 pm snack each and every day would consist of a small portion of some type of cheese and some sort of accompanying salted snack (crackers, pretzels, etc.). Frankly, there is little that I find more satisfying for me than this pairing. I'll take this savory combo over sweets most days. I'm guessing this is part of getting older and having moldering taste buds that can detect only stronger flavors, like the pungency of cheese and the heavy salt of a cracker or other such like.


These packets of small processed cheese blocks are sold in supermarkets and convenience stores all over Japan. They usually cost 100-150 yen depending on the brand and the number of blocks in the pack. This one was 100 yen ($1.20) at Seiyu supermarket. There are four 18-gram (.63 oz.) servings and each is 57 calories. There are usually salami, almond, and various fortified flavors (added Iron or Calcium). This wasabi version isn't incredibly common, and appealed to me because I like things like jalapeno cheddar back home. I like the combination of spiciness with the coolness of cheese. 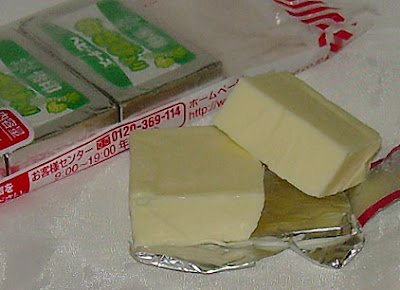 When I peeled back the foil, I was disappointed to see that there weren't little green bits of wasabi embedded in the cheese. The ingredients list reveals that powdered wasabi was used to flavor it. That isn't necessarily a bad point, but from an aesthetic point of view (and that does play a role in enjoying food).

These don't smell like much. They have the same bland aroma of processed cheese. The cheese flavor is not particularly strong. It comes across as more like cream cheese that operates as a base for the wasabi flavor. The wasabi is fairly well-balanced and is neither too strong nor too weak and the cheese seems to stop it from doing the usual punch to the back of the sinuses that I get from wasabi.

If you're a fan of wasabi, this makes a nice accompaniment to a pretty bland cracker. It's compact and easy to serve, which makes it more convenient than squeezing wasabi paste and placing cheese individually on a cracker, but it is a little expensive for what you're getting. Still, it's nice to keep on hand as a quick and handy snack, especially in your office refrigerator.

I really love this cheese! I've been having it toasted on nice bread for the last couple of days and it is yummy. I try to slice one square thinly and lay it on the bread. After it's a little melted I spread the cheese around and keep toasting.

I hope these stay in my grocery store for a while.

I sliced it down the long way and put half a block on a Triscuit which was pretty tasty, though I also just ate a block as it was. ;-) I should have tried it melted, but I sometimes have bad experiences with processed cheese when melting it. It can turn a little plastic-like depending on the kind of cheese.

This stuff is actually kick ass! I love globbin chunks of the real stuff onto mid quality sashimi until my nose and eyes drain completely.

LOL, Chris! It'd be interesting to hear about all of the things people can do with chunks of "baby cheese".