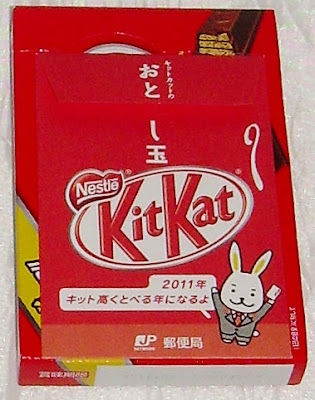 This review is a bit of a cheat in one way, and an authentic review in another. Some months ago, Nestle Japan altered the basic KitKat saying that it was more "saku saku" or "crispier". My husband asked me if I was going to review it to see if it, indeed, was noticeably changed. I told him that it seemed like too incidental a change to bother with, though I am intrigued at the idea of a KitKat which may focus more on the wafers and less on the chocolate.

We were at the post office several weeks ago, and he saw the KitKat pictured above for sale behind the counter. This is the regular enhanced crispiness KitKat, but it has a special envelope attached to it for "otoshidama" or money given at New Year's holidays. This is a nice way for grandma or grandpa to give their grandchildren their usual gift cash. I'm guessing they are sold at the post office in order to catch the eye of folks who are coming in to send off their "nengajo" or New Year's postcards. Note that there is a rabbit on the envelope because next year ("tomorrow" for me as of this posting) is the Chinese year of the bunny. I'm guessing this is the year in which the Easter Bunny, Peter, and the white rabbit were all brought into being. 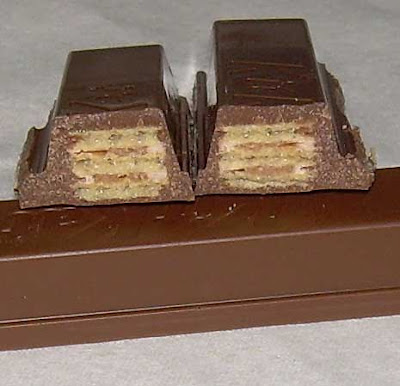 The KitKat itself is your regulation milk chocolate version. The only questions about it are whether or not it actually is crispier than the previous version and if it has a different general composition. The answer is, "yes", it is crispier. However, it is not crispier in an earth-shattering way. I don't know exactly what changed, but the sense I get is that the wafers may be toasted longer or their general has been recipe altered. Whatever the case may be, they are crunchier and make a louder sound in your head when you chew them.

Obviously, I'd buy this again if I wanted a KitKat. I love regular KitKats with their balance of wafers and milk chocolate. I just rarely get a chance to eat them with so many new things on my plate at any given time.

Happy New Year to all of my readers!

It seems that we are slow to get the new products (if at all) down here in Kyushu, so I just watch your blog and hope. Maybe we'll get that Kit Kat with a picture of a dragon on it :)

I was born in the year of the dragon so one of those would be awesome!

Happy New Year to both of you!

crispier? sounds interesting to me :)

Happy new year to you!