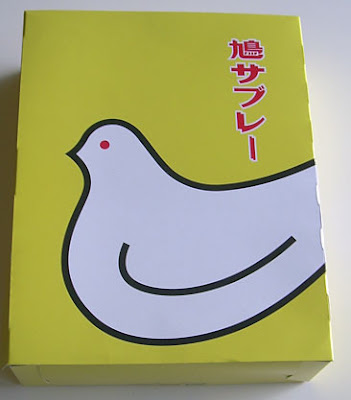 When I visited Kamakura, home of the big Buddha, I saw loads of people walking around with shopping bags with the design on the front of the Hato Sable (pigeon/dove cookies). I didn't understand why they were so popular, and I wasn't planning on finding out at that time. I was in Kamakura, for Pete's sake! I was going to try something traditional food, not what looked like a Western-style butter cookie! Of course, my dedication to all things Japanese on a trip to the land of the giant Buddha would have seemed a bit less hypocritical if my husband and I hadn't gone to an authentic German restaurant by the sea ran by two authentic German people (the food was great, incidentally).

The web site for these cookies says that the hato sable was "born" in Kamakura, so I guess that is why they were sold in abundance there. However, you can get them at many outlets around Tokyo as well as order them online from the company's web site. A box of 10 large cookies is 1050 yen (about $13). When I say "large", I mean that these cookies wouldn't be out of place in an American bakery. They're jumbo by Japanese standards, but then I guess miniature pigeons wouldn't really do now, would they? 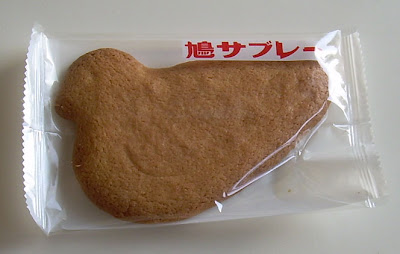 "Sable" means "sandy" and it is used in French to mean a cookie crispy, sugary, tender, and maybe even a little salty. These were introduced in the Meiji era in Japan when European culture was being welcomed with open arms by the Emperor. The ingredients list is very simple: flour, sugar, butter, eggs, and baking powder. There is nothing surprising in there, but the result is a perfectly crispy cookie with a rich buttery flavor and an amazing texture. They are neither too sweet nor too bland and have a very fine sense that separates them from commercially available butter cookies such as those that are sold in shelf stable packaging in markets.

I've been told that these cookies are extremely popular in Japan (especially as of the time I'm writing this). I'm not sure why after so many years of making them that they should be more popular now than ever. Maybe it's marketing and ramping up their distribution such that they are more readily available outside of Kamakura. Perhaps it's more complicated than that and people crave something simple yet high quality that carries a sense of richness in times of prolonged hard times. All I can say is that these are very well-made cookies that are not terribly expensive. If you see the distinctive bird design on the sunny yellow box, buy them and enjoy one with a cup of tea or coffee. Unless you're the type of person who needs heaping helpings of sugar in your sweets, there's every chance you're going to really appreciate these.

I'm not sure how I got to thinking of this, but I would be really interested in getting your reactions to American products that you haven't had in years. If your tastes, expectations, or even the products themselves changed.

Hi, Rozilla, and that's an excellent idea, especially since my access to Japanese snacks is going to be very limited for about 2 months. I may decide to do one review a week for awhile making exactly such comparisons. I hope that more than one reader likes the idea as much as you do!

Thanks for the suggestion!