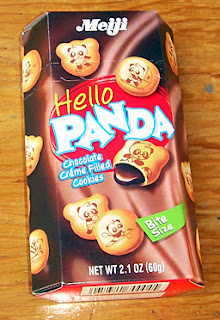 In my other blog, I've mentioned that any time I said that I liked some aspect of living in Japan, my students would say "thank you", as if they had just been personally complimented. This always struck me as weird because I never expressed gratitude when someone said they'd gone to McDonald's and had a hot dog for breakfast (which is something you can do in Japan). My students often expressed surprise when I said many Americans were quite fond of Japanese culture. I'm not sure how any of them, considering that most had been to the U.S. at least once, if not more times, could miss the fact that "Hello Kitty" is plastered everywhere. Even Stanford University's clothing store has Kitty-chan shirts emblazoned with their name placed up front and center in their tony shop at the Stanford Shopping Center.

Though I knew many people who are not Japanese are very interested in things that are, I didn't know the level of cultural penetration. When I was here 23 years ago, things like Hi-Chew, Pocky and these Hello Panda cookies were not readily available on store shelves nearly everywhere that white people shop for bargains. I say, "white people", because they generally aren't on sale in ethnic markets, unless, of course, those markets are Japanese. However, I'm not saying people who are not white don't shop at places like Wal-Mart, but most of them are smart enough (or scared enough) to pursue similarly cheap, but more interesting avenues of material acquisition. All of the incredible Hispanic markets in the area I'm currently living in lead me to think that is so.

"Hello Panda" is one of the most common offerings from a Japanese snack maker so it should be readily available to most of my readers. You can buy them online from a variety of outlets including Cost Plus World Market, The Asian Food Grocer, and Amazon. I found this box for $1 (78 yen) at Target, but I could also get them for $1.50 (117 yen) at the Daiso Japan. I wanted to sample these not only because they are so accessible, but also because they so closely resemble, at least superficially, the "Koala's March" cookies (from Lotte) in Japan. In fact, I think the product design and name are a fusion of ripping off "Hello Kitty" and the next available adorable bear character after the koala. Meiji clearly employed some solid marketers who figured out the best way to steal both Lotte's and Sanrio's media thunder by adding a whiff of familiarity to the product, or just had some people who so lacking in creativity they just cobbled this name together over beers at their weekly nomikai.

In Japan, I had tried several varieties of Koala's March, though I didn't review most of them. I tried sweet potato, vanilla, and chocolate and the result was always the same, a very thin bland crispy external shell with tooth-achingly sweet solid cream filling that was like fresh-tasting dried out frosting. I never took to the brand because it was just too sweet for me. I wondered if these cookies were going to ape that flavor as well as the general look of the cookies. 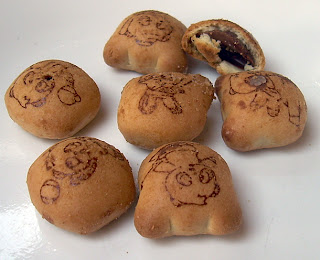 A sniff reveals a general chocolaty aroma. A bite showed me that the shells on these are much thicker than the ones on Koala's March. That means there is also less chocolate filling inside. The flavor profile is very different from the aforementioned cookie with the eucalyptus leaf eaters on them. These taste much more "biscuit/cookie-like" whereas Koala's March are nearly candy. The chocolate flavor is relatively subdued compared to the crispy cookie exterior. The closest flavor approximation is a Chips Ahoy chocolate chip cookie, though you can get more of a sense of the chocolate if you have the tongue and teeth dexterity to manage to get the soft chocolate cream filling spread directly on your taste buds. It's a bit of a trick, but rather worth it because of the rich fatty texture of the filling.

I liked these quite a bit. They're not the pinnacle of cookie experiences, but the cookie flavor was nice and they aren't painfully sweet like Koala's March. I regard it as rather ironic that a similar product designed for the U.S. market is actually less sweet than the Japanese equivalent (note: I never saw this sold in Japan by Meiji). Despite the Japanese insistence that they aren't sugar fanatics, there are plenty of foods that are sweeter in Japan than they are here (especially the salted snacks!). Though these aren't as sugary, they are just as fattening as Koala's March. The whole box, 60 grams, is 320 calories and each cookie is about 16 calories. It's a little too easy to pop them in your mouth like popcorn and eat a lot at once. However, if you can keep it together, they're a nice little treat for a quick sweet fix.

Hello Panda, Pocky and Hi-Chew are fairly common around these parts in the Asian stores and even at Vons of all places! I was browsing their ethnic food isle and I spied Pocky, Hello Panda and Hi-Chew. This must have been a recent change because three years ago I would not have found anything other than the Botan Rice Candies.
I am a fan of Meiji candies. Yum!

Being Nikkei, I of course grew up with Pocky. But the generally available item here (Safeway, etc.) was always Yan Yan, made by Meiji.

Hello Panda!! i like this too, not expensive as well :p
But I prefer "Koara no march" by Meiji, its more yummy!
Let me follow your blog, but you dont have Follow button??

Susie: It's interesting that the change was so recent, but actually quite welcome. :-)

zyzyva: I've seen Yan Yan, and I'm thinking of giving it a review some time when I get around to it!

Lim Kayo: There is a follow button, but it is listed after my links on the right hand side (after the "food-related fun" links, about 1/4 to 1/3 of the way down the page). Thanks for reading!

Thanks to everyone for commenting and reading!