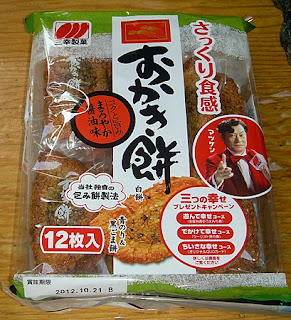 One of the things which I have not had any sort of access to since coming to America is sembei (rice crackers). Yes, I can find rice crackers in shops that look like sembei, but I've discovered that they don't taste like it or have anywhere near the same texture or flavor depth. What little I've had has been too soft and lacking in snap and lightly dusted with flavoring on the outside. In other words, they are nothing like the richly flavored crackers I tended to experience in Japan. The adjective that comes to mind is "flaccid".

Fortunately for me, Nijiya Japanese markets carry real Japanese sembei. Yay! Unfortunately, they tend to be much more expensive than what I could buy in Tokyo and I cringe at the idea of paying 3x as much (or more) for a bag of rice crackers. Sure, I love them, but I also love Pop Chips and they essentially fill the same empty snack hole in my life. Salty stuff is salty stuff. Well, not quite, but for the price of one modest package of sembei, I can buy an enormous mega-party-size bag of barbecue Pop Chips at Costco. I can snack for a month or so on that, but I was starting to long for my old sembei experience.

Fortunately for me, these appeared to be on sale when I was at Nijiya. Instead of something in the $3-$4 range, these were about $2 (157 yen). This priced them pretty much at the same point as if I were at Inageya supermarket back home. There are 12 individually wrapped crackers, each is about the length of your palm and a little less than half the width. By the way, I used to give exact measurements, but someone wrote that I was too precise, so now I just try to give a visual approximation. That may still be too much information, but each is a single serving so it's important to know what you're getting. One cracker is 45 calories. 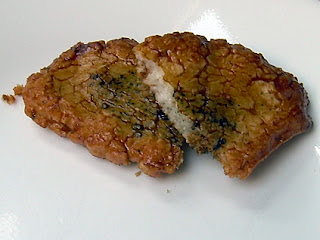 When you open the package, these smell like concentrated soy sauce and baked rice. Ah, smells like living in Japan and being given snacks at tea time by an office lady. The taste is a good blend of soy sauce, savory spices (chicken, mirin (sweet sake), sesame, bonito (fish flakes), etc.), and seaweed. On the surface, this isn't necessarily a mix to warm the cockles of my taste buds, but they come together in a savory melange of goodness. You can't really detect anything individually except the soy sauce and seaweed. The remainder forms a backdrop of rich flavor depth. Coupled with the super crispy cracker, this is a sublime experience.

It could be that my absence from such snacks has made my heart grow fonder. Scratch that. This is the sort of thing I'd completely take for granted if I were still living in Japan and experiencing it after so long an absence made it much more enjoyable. This really took me "home" to living in Tokyo again as it had a blend of flavors I'm unlikely to experience from any product that wasn't exclusively designed for the Japanese market. I'd certainly buy it again.

I've bought these before and I love them...

that looks pretty good. i'm currently enjoying kelp-flavored sembei from befco. hope san mateo is treating you well--you should have lots of asian markets to shop at!

btw, who's that guy on the package anyway?

Miyaki: Glad that there are two of us!

As for the guy, I no longer have the package and I don't know who he is! It's a good question!

Thanks to both of you for reading and commenting!

i think i figured it out! the guy on the package is ken matsudaira. i think he's famous for doing period dramas. here's a video of his senbei commercial. :)