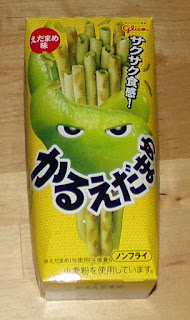 My stroll through the ZenPop box is one that I'm hoping will be far less leisurely so, with any luck, I'll be posting one review a day until I wear myself out, get called in for grand jury duty, or put on too much weight from an abundance of appealing Japanese junk food. 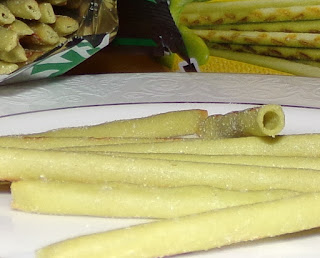 When I first saw the box for this snack, I assumed that the snacks inside were just pretzels flavored with edamame (young soybeans). It turns out that I was mislead by the little brown marks on the sticks (from where they've been baked, not fried, as the box tells me) and the shape. These are actually crispy tubes made of potato, edamame seasoning, and a plethora of other things which, if I listed them here, you'd only want to eat them less. And these are delicious so I don't want to reduce the chance that you'll try them.

The texture is crispy and light. The hollow tube design makes you feel like you're eating an expertly rolling potato chip that is perfect in crunchiness. The flavor has a bit of depth as the front end is a little salty and slightly potato-like. The back end is pure edamame with its verdant qualities. It's exceptionally well-executed to bring the target flavor to mind.

The box has 36 grams at 185 calories. I ate half at one sitting as a side to a tuna sandwich, but I could easily see going through the whole box at once with a cold drink on the side. It takes more than a little self-restraint to not do that.