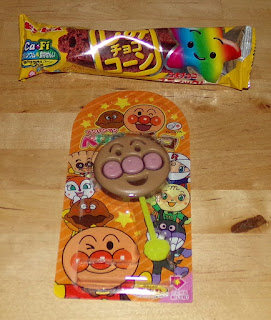 I'm headed close to the finish line in my race to review all of my ZenPop box treats before I loose my free time to jury duty (which is coming up on May 2nd). I have to say that it's been quite refreshing to get back in the groove of steady reviewing, though I know that I'll run out of things to review pretty soon.

If aliens came to earth and looked at our food, would they be confused by the fact that we shape our food like humans and then eat them? There are chocolate Santas at Christmas in the U.S. Why would we want to cannibalize a jolly guy who wants nothing more than to give us free toys?

These are the thoughts that occur to me when I look at snacks like the Anpanman chocolate lollipop. He looks so happy, and I just snapped his head in half, took my picture, and then took a bite out of him. If it is any consolation, he didn't taste especially good. 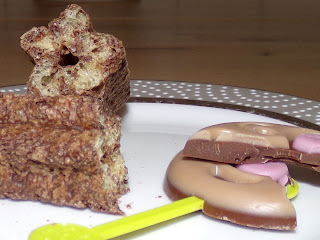 Incidentally, "pero pero" means "lick, lick" which I guess refers to the fact that this is on a stick. However, this isn't really designed for licking. It's barely designed for eating at all because the texture is too soft and the chocolate flavor is fairly muted, especially toward the center where there is more pink chocolate. It's balanced in sweetness. It's vaguely milky, but mostly seems to be too adulterated with vegetable oil to have any sort of pure flavor elements. It looks cute, and it doesn't taste terrible, but this is largely for novelty rather than for flavor. I had my husband sample it and he said, "It tastes like inferior chocolate." That about sums it up.

The other item in this double review is best known for it's tasty animal crackers. The "shimi corn" like is made up of various flavors of a cereal like corn base. It sounds very unimpressive, but it actually was very satisfying. The flavor of the chocolate was excellent and the texture of the star-shaped corn tube was perfect. It was neither too dense nor too crispy. If you like eating sugar cereal dry out of the box (and I do), this is going to be the bee's knees. This was unexpectedly tasty and I wish I had a case of them around for future noshing. It just really played into my tastes.

So, the moral of the story? Cannabalism is wrong in every way. Don't go around eating the heads of fictional characters. It will not be nearly as much fun as you anticipate. The other moral? Corn is always king!