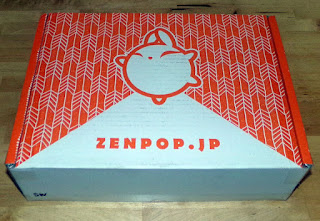 I didn't expect to be doing two Zenpop "unboxing" posts in a row. In fact, I expected to review the items in the previous box. I have a good excuse. No, really, I do. If you don't think what I have to say is a sufficient reason, then you haven't had my misfortune. My excuse is, in three little words, "grand jury duty."

If you've never been selected for this honor, then let me say that I was fortunate that my term is shorter than some, and it's still longer than regular jury duty by far. I'm on the hook for random service for three months and each day that I do it is like an exhausting day on the job with no down time because there's no taking a break to look at your cell phone (not that I have one of those, I don't) or browse the web. 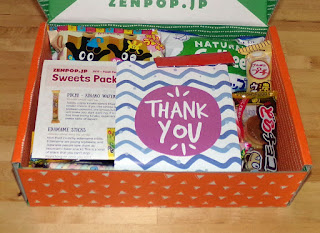 I hope to do better reviewing the items in this box, but I can barely cook my own dinner when I'm on duty, let alone ponder writing things. Still, my fingers are crossed and I'm going to push harder to squeeze in some reviews because I was pretty damn excited about this box when I saw what was inside.

As I've said before, I consider ZenPop to be one of the best value snack boxes out there for Japanese goodies. They packed this one super full and even managed to include two drink options which was suprising and welcome. Of course, the way to my heart was swiftly found with the inclusion of kinako wafers. I literally cuddled them to my chest when I found the package. 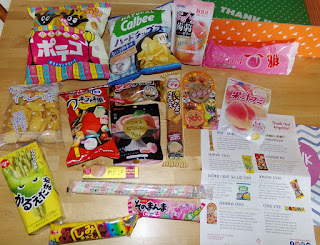 In terms of the contents, it's detailed in the included packaging, but I'll briefly talk about them in groups by type here:

Anpanman choco: While this looks like a lollipop, it's really chocolate on a stick featuring the familiar face of Anpanman. In the U.S., we would call him "Bread Head," and he'd be a candidate for a villain in the old Tick animated series.

Long Marshmallow: I've already got my speculation about how this is going to taste. Japanese marshmallows are quite different from American ones both in texture and in taste. They tend to be more "gummy" and chewy rather than soft and pillowy.

Dorayaki Choco: This is a shelf-stable, kid's sized version of the venerable Japanese snack which is like two pancakes with filling. Usually, these are filled with red beans, but these have chocolate which I'm betting will make them a bit sweeter.

Choco Stick: I reviewed several things called "Choco Stick" before and this one comes closest to this one. However, it doesn't look like it's actually a corn snack dipped in chocolate, but rather a corn snack made from the ground up with chocolate.

Peach gum: The description of this recommends putting all three pieces in your mouth at once and trying to blow a big bubble. I'm saying right now that that is what I'm going to do, but not because I do what I'm told. I'm going to do it because gum is too tiny these days and you need at least two pieces to satisfy my big mouth and there's no point in leaving that one little bit an orphan.

Konjac Jelly Peach: Technically, this isn't a drink, but a liquid jelly that you suck out through a spout in the top. I'm guessing this is what Japanese astronauts eat in spring.

Peach Drink: This is technically a "dagashi" (kid's snack) and I do recall seeing this type of thing sold in Japan, especially in summer, but I never tried one during all of my years there.

Poteko Cherry Blossom salt flavor: Poteko are super crunchy potato rings and I reviewed the regular (salt) flavor before. I have no idea how you flavor salt with cherry blossom, but I guess I'll find out.

Curry Arare Sembei: These are an old-fashioned type of rice crackers that are easy to find in most stores in Japan. While this is also mentioned as dagashi, I think this is also within the range of otsumami, or snacks to be eaten with alcoholic drinks. I'm guessing this will be more about the crunch than the flavor. If these are dagashi, they won't have as strong flavors as adult-oriented rice crackers.

Edamame Sticks: This is a bona fide otsumami snack which looks like it's a version of the same pretzels that are used on things like Pocky.

Otsumami Mix (mixed rice crackers): After the kinako wafers, this was the item I was happiest to see, but I'm a sucker for sembei.

Natural Calbee Sea Salt Chips: Though these have a relatively common flavor, they're supposed to be thicker than usual chips. That would make them similar to some Kettle brand chips. I'm guessing that they will be one of the less unique and underwhelming experiences in the box. Japanese chips usually have a fresh flavor compared to Western ones, but they aren't likely to be so different.

Petit Kinako Wafers: I've reviewed this product before and loved it to pieces. The Bourbon brand of petit snacks is often carried at Japanese markets and import stores in the U.S., but these have never been there when I've patronized one. So, they're one of those flavors that someone seems to have decided aren't going to sell in America, much to my chagrine. And, yes, I tried these already (again) and they are nearly the same as I remember except that they are less messy. Unfortunately, the exterior isn't coated in kinako powder so it takes longer for the flavor profile of the toasted soy bean to hit your tongue. Still, they're very tasty.

Gelee Pure Peach gummies: I've had a lot of Pure gummies and they are really hit or miss. The best ones are amazing. The worst ones are gross and hard to finish. We'll see how these are.

Peach Gummy Candy: This is Meiji's version of gummies (the previous ones are made by Kanro). I have less experience with these. I hope to review these two snacks mano a mano.

I think this is a pretty respectable assortment with something to offer everyone and a good focus on the seasonal flavor of peach. I can't promise to review them all, but I do promise to get to some of them despite jury duty. :-p Thanks for your patience!