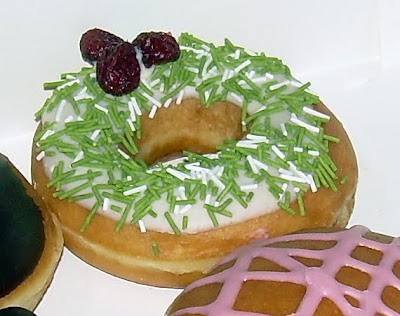 Krispy Kreme all over the world offers special holiday donuts at this time of year. It's interesting to compare the fare in Japan to that in the U.S. in particular because of the notion that Japanese people don't like their sweets as sweet as Americans. Therefore, one would expect that the Japanese specialty donuts would be less elaborate and sugary than the ones back home.

Before I get to the holiday donuts talk, I'd like to mention that my research into the nutritional information of American and Japanese Krispy Kreme donuts turned up a curious bit of information. The original glazed donuts, which one might expect to be exactly the same in both countries, are actually 10% higher in calories in Japan than in the U.S. What is more, the chocolate glazed in the U.S. is 250 calories and the Japanese one 299. My guess is that this is related to fat content since Japanese sweets and baked goods often skimp on the sugar but not the fat.

The Japanese menu offers a donut that trumps any of the American offerings in terms of calories. The Thanksgiving special donut, a chestnut glacé number filled with custard, weighs in at 413 calories whereas the highest American offering are the apple fritter and caramel cream crunch at 380 each. So, even though Japanese versions of treats are less sweet, they aren't necessarily less fattening. 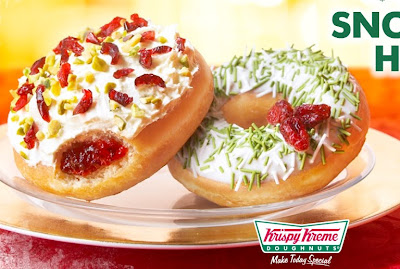 image taken from the Krispy Kreme Japan site
For Christmas, Krispy Kreme Japan is offering up two cranberry donuts. One, the "snow cranberry tea" variety, is filled with jelly and topped with pistachio pieces and dried cranberry fragments. The other, the "holiday cranberry ring", is little more than a plain raised donut with white frosting, sprinkles and a few dried cranberries to simulate the look of a wreath. I opted for the less elaborate cranberry ring to sample as it weighed in at 254 calories while the jelly one came in at a whopping 379 calories!

the "holiday dozen box", which appears to be the only way to get the snowman donuts, and only two of them at that (image taken from the Krispy Kreme site)
In America, they're offering a really enticing looking gingerbread crunch doughnut and snowmen donuts. The snowmen are pictured on the Japanese web site and their nutrition information for both "red" and "green" snowmen are on the .pdf for the Japanese donuts, but my husband couldn't find them for sale at the Shinjuku Krispy Kreme that he occasionally patronizes. If you'd like to see the American donuts, you can check out the web site in the U.S., though the holiday specialty items will vanish by the end of the year so you'll have to have a peak soon before the pictures are taken away. 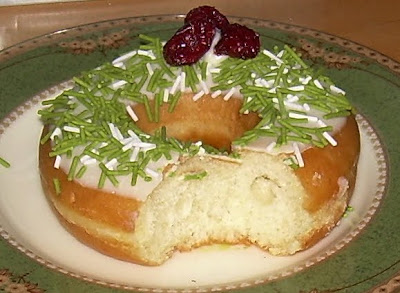 As for the donut I sampled, it was a good donut, though generally succeeded because the basic yeast-risen donut is tasty on its own. I'll note that I didn't eat it fresh, but rather saved it for the next morning's breakfast and gave it about 12 seconds in the microwave to "wake it up" a bit. The frosting and sprinkles were just right to lightly sweeten it. The bite with the cranberries was really tasty, but just one bite. It would have been nice if this had been topped all over with cranberry fragments like the jelly version, but then it wouldn't look like a wreath.

I'd rather have had a shot at the gingerbread donut that is available in America, but I'm guessing the whole concept seems too sweet for Japan. I've noticed that the Japanese donuts are far more likely to use bits of fruit in them or to at least offer the illusion of fruit than the American ones. Though I do love cranberry, I wasn't going to eat a calorie bomb to get more of it and the donut I bought had very little of it, hence the reason I'd rather have had a chance to sample the gingerbread one.

If anyone in Japan has sampled the "snow cranberry tea" version and has the time to offer their opinion in comments, I'd love to hear them. I can't recommend that people go out of their way to try the one I did, though if you are in the mood for a plain glazed Krispy Kreme donut and want to try something a little different this time around, the "holiday cranberry ring" isn't much further off the mark and is unlikely to disappoint.
Posted by Orchid64 at 12:00 AM

I'm glad there isn't a Krispy Kreme on this island, because I do find their glazed donuts to be as addictive as crack. I also tried another one of their donuts, one with a cookies and cream filling. While eating it, I thought to myself, it's so wrong, but so right.

Their glazed are also the ones I favor. I'm not very keen on the jellies because the filling always tastes like canned pie filling. I know a lot of people are down on them, but I think the basic donuts are generally pretty good.

I think that you need to work the phrase "so wrong, but so right" into your Impulsive Buy marketing somehow. It really does seem to be a good motto for your life. ;-)

I remember when I was driving from CA to NYC, I stopped at this place in Chicago, it was a drive through.... and remember.. crap or was that in and out burger?

ah... you know I gotta spell check my comments before hitting send...

I was pleased with a Krispy Kreme donut I had in Ginza, but now I can't remember what kind it was...

Personally, as a tourist, I enjoyed Mister Donut more than KK.

PS: props to Japan for one-upping America on Christmas donuts this year. Ours aren't even available yet! XD