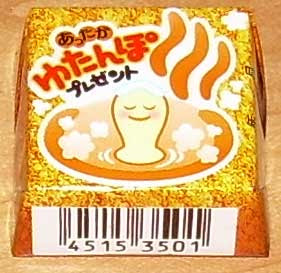 I've been doing this blog for a little over a year now, and one thing I've noticed is that what has come and gone has now returned. Lately, while I've been perusing the snack shelves, I've been noticing a lot of reruns. As I mentioned in Monday's post, most of them are in different packages than their original issue, but the contents are the same.

This may sound like bad news, but it made me happy. I have had the sense since I started this that there would always be an overwhelming array of items to sample and that I'd never get to most of them. The fact that a lot of what I've already tried is getting reissued seasonally means that the field is getting narrower, but also that my old reviews have long-term, or at least "longer-term" value.

Speaking of reruns, Tirol fooled me with a repackaging of their yaki kinako mochi premium candy. The candy itself was reviewed in a previous post with a fairly "blah" response from me. I thought that I'd seen a third permutation on the premium kinako mochi when I saw the new packaging. Also, the product has a different name. It's called "attaka yutanpo presento" (hot hand warmer present). It says "yaki mochi kinako" (grilled roasted soy bean rice cake) in very tiny letters on the side, but you have to really look for it.

Image pinched from Tirol's web site for this campaign.
The new packaging is part of a campaign which allows people to enter a contest to win a hand warmer enclosed in a case that looks like the kinako mochi mascot. You collect 10 points from the packaging (which can have 2, 3 or 10 points per package - mine had 3) and then can enter the contest by sending in a postcard with your points taped to it. There are 3000 hand warmers to be won. The address appears on the site linked above. You can print it directly from the graphic if you can't write in Japanese and are interested in the contest, which ends on February 28, 2010.

I must say that it's rather cheeky of the folks at Tirol to package the same candy differently just to sell them for an advertising campaign. They could have at least put points on the existing premium candies or made a new flavor for the contest. One might think that I'm just too dumb to know it was the same flavor, but I showed the package to a Japanese friend and she also said, "it doesn't say what it is" when she looked at it (and, no, I didn't prime her to say that - I just showed her the package). Still, the hand warmers are pretty cute. It's not cute enough for me to buy more candy, but I would probably enter if I were going to buy the candy anyway.
Posted by Orchid64 at 12:00 AM

The hand warmers are pretty cute! Have you seen many KitKat repeats? I feel like every time they put out a new flavor, even if it is something they have released many times (like strawberry), they try to give it a different name and a slightly different spin.

The only KitKat rerun I've experienced so far is the green tea one. It's definitely the same old thing with the same name but in a different package. I expect that we'll see more reruns eventually, but only on specific flavors. And, boy howdy, you've got it right about the way the mutate strawberry ever so slightly each time. I've got another one in the pipeline for next week! (another strawberry KitKat, that is)

Nestle is more clever about such things though because they can repackage into minis, big bars, and bites after having made the regular bars.

OH please.. lets hope they keep running the Green Tea one... if you happen to stumble upon Lotte Green Tea... buy the box for me... I can freeze it.

I must say... the hand warmers are just adorable... I have not tasted the Tirol yet....

You mean Lotte green tea chocolate? I don't think I've ever seen that, though I have to confess that there is so much green tea stuff around that my eyes sort of glaze over when I see them. ;-)

Yes... opps.. that sounded like Lotte made green tea leaves, powder... My client brought me Lotte Green Tea Chocolate bar a year ago-- I think it was their gourmet selection .. I have not seen or found it since...

Did I mention I'm a Green Tea Otaku? haha "wink"

Congratulations on the tree finally coming along!

I should have you "guest review" green tea items since I'm not a huge fan of them and therefore tend to feature them infrequently. You'd also take much, much better pictures of the food than I! :-)

I'll be looking forward to seeing your Christmas decorations on your blog!

Oooh.. Thanks so much!!! I would be honored. I think I put the tree into three different spaces, then brought out the berber carpet.. it didn't look right, I ended up putting it away.. then the tree fell on my head... I clocked maybe 5000 steps that day... and when I hit the bed I don't even remember falling asleep....