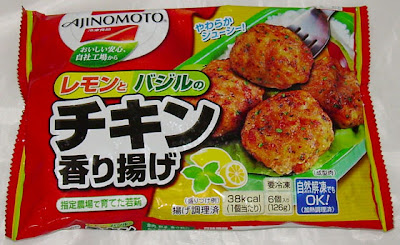 One of my readers commented that he would like to see me review more frozen foods or ready-to-eat foods. In response to this, I'm going to try and fit in one of these types of reviews about once a month even though they're not snacks. Since I cook most of the food I eat, this isn't the sort of thing that I take to naturally. That being said, I think it will be interesting to investigate some of these items on an infrequent, though hopefully regular, basis. Trust me when I say that this is in no way an indication that I'm running out of snacks to review. In fact, recently I was struck by the fact that I will never run out of new snacks to try.

I chose this package of frozen nuggets because it was one of the few things which wasn't pasta or rice-based in the small frozen foods case. For the record, the majority of the frozen food in Japan is "doria" or "gratin" (cheese, rice, and some animal-based protein), with an emphasis on shrimp versions. Since shrimp makes me gag, you won't be seeing any reviews of shrimp-based dishes. A lot of the other frozen food bits are fried foods like tempura or other types of fried cutlets which are designed to be put in bento boxes.

I found this at Inageya supermarket for 198 yen ($2.13) for 6 nuggets. The nuggets are a little big. I'd say each is about one and a half times the size of a McDonald's nugget. There are 38 calories per nugget. I'm not a big eater, so three of these accompanied by a little under a cup of rice (and some carrots) was a big enough portion for me for lunch. The ingredients include chicken, soy sauce, mirin (sweet Japanese cooking sake), various meat extracts, basil, parsley, and caramel coloring.

The company that makes these, Ajinomoto, is well-known for its seasonings including MSG, frozen foods, and prepared foods. They make a lot of packaged soups, dressings, and mixes designed to allow for faster food preparation. Early on in my stay in Japan, I tried their "Cook-Do" series for "mabonasu" (a Chinese-style eggplant dish), and wasn't too impressed. Part of their marketing includes the slogan "welcome to tasty Japan." I think that the basic idea is that their foods offer people the taste of Japan through their seasonings. 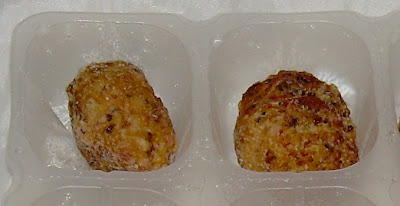 The nuggets are packaged in little plastic cups that are perforated so that you can break them apart and heat them individually. Though they look a little like something with a fried coating, they're actually little formed bits of white meat chicken with a thin, chicken-skin-like coating. I was ready to pop these in the toaster oven, but the directions on the package explicitly say not to use such a device. I'm guessing that this is because the seasoned skin-like covering would stick like mad to a toaster oven tray and you'd be left with just the processed chicken and no seasoned jacket.

I microwaved three nuggets at 600 W in their individual plastic cups as instructed for 1 minute, and they were still cold so I gave it another minute and that seemed about right. The package instructs you to use an oven with a turntable for even heating, but mine doesn't have one so I just rotated the plates at the half-way point. 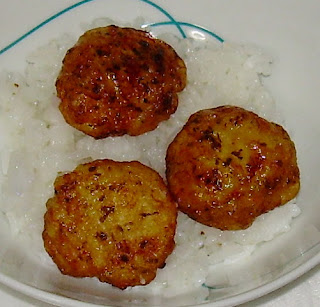 The smell coming from them was like funky cooking oil. I'm guessing this was the lemon and basil seasoning. The exterior was quite greasy, as you can see from the shiny exterior in the above picture of the heated chicken balls. The texture was probably the worst part. The chicken is somewhat spongy with a stretchy very thin exterior which is tough to cut through with a fork. In fact, it was difficult to cut them in half and eat the meat proportionally with the rice. I'm guessing that these are meant to be snarfed down whole rather than cut into dainty bits for people like me who prefer not to go all chipmunk-cheeked when I eat. 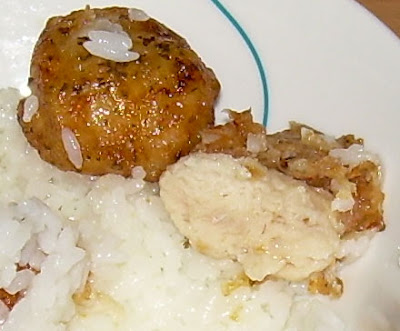 It doesn't taste like fried chicken, despite looking like it. Mainly, you can taste lemony basil oil with a heavier emphasis on a canned lemon juice taste. It's a little salty, but not over the top. The flavor is not bad at all, but not a great one either. It doesn't taste like much on the chicken front, and the spices could be better. That being said, I think this was at least as good as a fast food nugget. That's not high praise as I think fast food nuggets are generally pretty tasteless and awful.

Though I will finish the package and have the other three nuggets, I wouldn't buy these again. One thing to keep in mind is that I'm a pretty good cook and I set the bar somewhat high on things like this. I can cook chicken very well, and these don't come close to how tasty a well-cooked piece of breast meat comes out. I think people who don't cook might find them more enjoyable than I do. Certainly they're worth a try if you can't cook or have limited options.

I have been reading your blog for a while and thought I should finally comment.

I actually enjoyed these "chicken balls," but I can understand your perspective - the chicken flavor is pretty weak. I really enjoy strong lemon flavors, so this is something that I use for bentos and quick-fix meals.

Also, I do my own bit of Kit Kat stalking and, I am not sure if you have run across it yet, but there is another new flavor on the market called "Mixed Juice"

Hi, tobidasu, and thank you so much for taking the time to comment and read. I can certainly see where these would be handy for fast meals and bentos. In fact, I'm pretty sure bento are the market these may be aimed at. For me, I usually freeze some cooked, sliced homemade chicken breast for fast meals, but I know not everyone has the time or inclination to cook.

I'll poke around and see if I can locate the "mixed juice" flavor you mention! Thanks for the heads up!

I don't understand why you feel compelled to add in a pinch of Ajinomoto. Everything they make is a neurotoxic or carcinogenic poison, like
Aspartame and MSG. This is one of the biggest corporate killers on the planet! Please read this article:

Here is another excellent one explaining how it got approval:

Stephen: Well, I must say your comment took me by surprise because you seem to be saying that you believe I am endorsing Ajinomoto in some fashion by giving their product a lukewarm review and saying I wouldn't buy it again.

If you have read my other reviews, you will see that each time I review a product by a particular company (any company) for the first time, I talk a little about what that company produces besides what I am reviewing and I link to their web site. This isn't an endorsement of them. It's simply part of how I write and meant to provide readers outside of Japan with a little information about the company's products.

I don't use MSG, and I'm not endorsing anyone or anything through my blog. As I have said many times before, I don't get any products for review for free. I buy everything with my own money and have no incentive to promote any product beyond my enjoyment of it, and I hardly encouraged people to run out and start buying Ajinomoto's frozen foods.