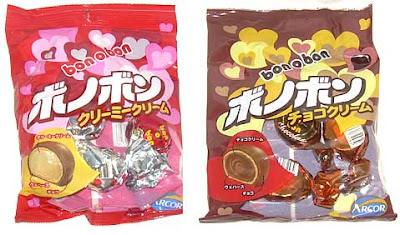 All 100-yen shops are not created equal in Japan. Some of them mainly carry food and are like tiny, cheap supermarkets selling food in small portions. Some carry novelties, housewares, and other things that you're not supposed to put in your mouth (let alone swallow). One chain which has a blue sign with the words "100 yen" written on it in white carries both snacks and a large number of housewares. That was the shop where I found these varieties of bonbons. It's a bit further afield than my usual haunts, but it had things I don't often see so it was work the trek.

These are distributed by snack manufacturer Yaokin, which I know well from it's salted snack foods designed for the Japanese kid market. At the time that I researched the company for other reviews, I downloaded a catalog in .pdf format which included a plethora of snacks that I had never seen before and these bonbons were amongst those previously undiscovered treats. These chocolates were produced in Argentina, and are sold under the brand name Arcor. They are sold in the South American market, and are a bigger deal there than they are in Japan. There is a cute animated commercial for them on YouTube. 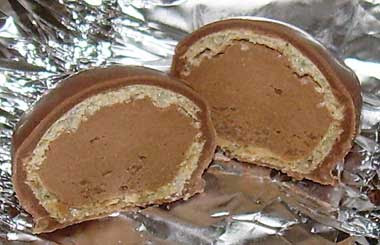 So, it ended up being the case that these are not Japanese, but they are marketed in Japan so that makes them fair game for me. Each is about 4 cm (1.6 in.) in diameter, and there are 6 of them in each bag (for 99 yen or about $1.10). There is no nutritional information on the bag, but I'd guess they're 80-100 calories each. The ingredients include sugar, peanuts, cocoa powder, cocoa butter, and cocoa mass.

I first bought the chocolate cream variety and my husband and I gave them a taste. They're a little like a cheaper, bigger version of a Ferrero Rocher hazelnut chocolate. They smell like cocoa, with a hint of peanut. Each is a nice blob of soft, creamy filling with a thin wafer shell dipped in chocolate. The chocolate flavor is rather weak, and you can tell it's either designed for a market which is dissimilar from that in Japan (where chocolate is bittersweet) or it's just cheap chocolate. That doesn't make it bad at all. It just makes it a better choice for those who like milk chocolate than those who like dark or strong cocoa flavors. The chocolate is creamy, but has some grain to it. 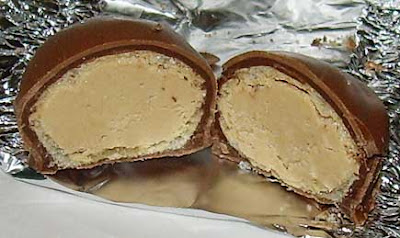 The vanilla cream flavor bonbon is very similar to the chocolate one, but the flavor is a little "cleaner". I wanted to try the vanilla variety mainly to see if the peanut butter shined through more intensely when the filling wasn't full of cocoa goodness. It turned out that it wasn't any stronger, but it still was good. It was sweet, creamy, and had mild but detectable hints of peanut. There wasn't much of a true "vanilla" flavor, but it was still good.

I really liked these, though they clearly are not a premium candy and lack the refined quality that Japan-made chocolates have. They have a lot going for them in terms of the textural elements and the peanut and chocolate flavor combination. The center is rich and fatty, but rather light. The wafer makes a nice contrast with the soft center.

I can not only say that I would buy these again, but that I went out and bought three more bags of them after the first one was gone. For 100 yen each, these are really great. The only down side is that you might want to eat the whole bag and regret it.

Well, just so you know, these look... well, I'm salivating. With all the stress the land and house is causing me, I should KEEP AWAY from any choocies, or else, I'd eat two bags...

This reminds me of the ice -cream bon bons? Do you remember those?

Hi, April Marie, and thanks so much for commenting. :-)

These are good. I have pretty good snacking self control and can usually limit myself to one piece without much difficulty, but these seriously tasked my ability to eat one and leave the bag alone. I think it was the peanut butter aspect. I'm a sucker for peanut butter!

I remember the name of the ice cream bon bons (or at least their existence), but I never tried them. Your mentioning them reminds me of Pino, which I haven't eaten for years and I'm guessing would be nowhere near as guilty a pleasure as American ice cream bon bons.

I'm from Argentina and I love thems!!! Here there are three kind of them, classic, white chocolate and dark chocolate!!!

I'm from Argentina and I love thems!!! Here there are three kind of thems, classic, white chocolate and black chocolate.

Hi, Sercox, and thanks so much for reading and commenting!

These really are good. They recently disappeared from the 100 yen shop in my area, but I'll be hunting them down again! I'm sure they're still sold somewhere since they're still in the Japanese distributor's (Yaokin's) catalog.