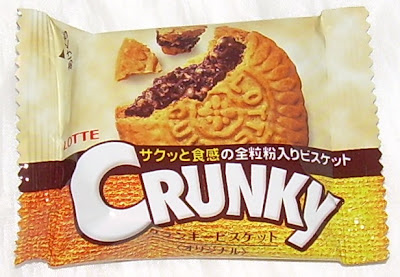 One of the things which helps me post with the frequency that I do is the fact that I can share whatever I buy with my husband. I couldn't possibly eat 4 or 5 days worth of treats myself without putting on a lot of weight or chopping out a bunch of healthier calories. Unfortunately, this symbiotic relationship has been put (at least) temporarily on hold because my husband had a blood test with some discouraging results. It's not necessarily at a serious point at this time, but he needs to lay off the sweets and shape up his diet a bit for a time.

Fortunately for me, there are avenues to pursue which allow me to keep reviewing without a second snacker on hand. One of those would be AM/PM's selection of single portion packets. I'm not sure why that particular convenience store is the one that carries the most small packages of individual snacks, but it does make it easy for someone to sample without having to put away a ton of junk food. The only problem is that you pay quite a lot more per serving for the luxury of buying just one small serving at a time. 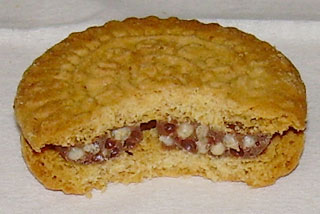 Since I like (plain) Crunky bars, I figured that I'd pick up this single-cookie biscuit for 40 yen (43 cents) at AM/PM. For those who don't know, a Crunky is like a Nestle's Crunch type of bar with malt puffs instead of rice and Japanese-style milk chocolate (that is, slightly bittersweet) instead of American-style milk chocolate. I wasn't sure what to expect, but when I opened the package, I was a little disappointed to see that this is simply a cookie with Crunky bar in the middle. The filling is hard milk chocolate and has the same malt puffs as a standard Crunky. There were no modifications made to the recipe to make it a cookie filling.

The cookie on the outside is a nice enough sandwich cookie. It had a stronger flavor than some cookies because it was baked to a darker state than some of these types of cookies. This brought out the grain flavor. The main problem with this is that neither the cookie nor the Crunky are enhanced by their pairing. It's like a marriage between two nice people who are poorly matched. The cookie would be better off married to a cream filling. The Crunky is actually better off staying single.

Since there was only 1 cookie to eat (62 calories), I ate all of this. I wouldn't buy it again, and I'm pretty sure that I wouldn't have finished a bigger bag by myself. It's probably not quite fair to give it an indifferent rating. I imagine that I'd be giving it an "unhappy" rating if this were in a larger portion, but I did eat it all, and it wasn't an unpleasant experience. However, I can't recommend it.

haha. so they just put some crunky chocolate in between two cookies??? too bad, it looked so exciting on the packaging!