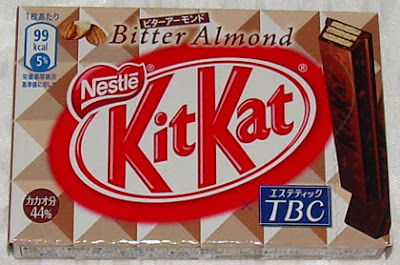 This KitKat has to be one of the weirdest cross-promotions I've ever witnessed in Japan. The bar is TBC, Tokyo Beauty Clinic, crossed with a KitKat. I'm not sure what KitKats have to do with beauty. I'd think they'd be more closely linked to weight gain and pimples than beauty.  Somehow though, we're supposed to see a link between a place that gives facials, removes body hair, and does body shaping and a candy bar. The advertising blurb for this indicates that this flavor combination is supposed to appeal to women, though it isn't calorie-reduced as many products marketed toward them are. It's 99 calories for one two-finger packet which is average for a regular size KitKat. Note that there is a mini bar which is flavored with aloe and yogurt that is also a part of this campaign. I'll be reviewing that bar in the near future.

This smells quite good. There's a stronger cocoa element to the aroma because of the dark chocolate. As promised in the name, this is bittersweet chocolate, which a heavier emphasis on the "bitter". The almonds are rather faint and tend not to be very present in terms of flavor. They do seem to have a bit of a mitigating effect on the bitterness and there is a little bit of a nut butter flavor in the filling between the wafers. 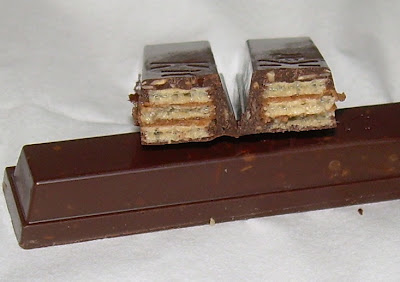 The box says that this bar is 44% cacao, so it has an intense flavor, but it's not as oppressive as some dark chocolate can be. It's not very sweet either. I enjoyed it, but I'm a big fan of almonds and wish that they had played a much bigger role in the taste. That being said, if you don't like overly sweet bars and also do not like very bitter dark chocolate, this could be the bar for you. It's tasty and the texture is enhanced both by the wafers and the almonds pieces. This bar was released on May 31, so it should be around for awhile. You can get it for the( higher than usual for a KitKat) price of 130 yen ($1.41) at most big name convenience stores now.

why i couldn't find any bitter almond kitkat in malaysia??

actually, i need your help in completing a survey on Blog Quality Evaluation @ http://www.surveygizmo.com/s/187637/blog-evaluation

Ooh... I LURVE dark chocolate and I LURVE almonds and I LURVE Kit Kat!!! I hope the Japanese specialty shop in my mall brings these in!!! Tabetai yo!!

Please post your review of the yoghurt & aloe one soon. It's such a strange combi with chocolate but hey,it might just be one of those unlikely but perfect matches! I'm sooo curious!! =)

I've been looking for this one and the Aloe Yogurt but they haven't made it down to my area of Kyushu yet. Good to know the Bitter Almond is tasty!

Thanks to everyone for commenting and reading. I appreaciate it!

myfuzzyworld: I'll do my best to help you with the survey. I started it last night, but didn't have time for the second page.

Sandy: I'll try to post it next week some time. :-) I have some hopes for it because I love yogurt.

Dollars to yen: These were not available at 5 out of 6 conbini in my area! Distribution here is very strange!