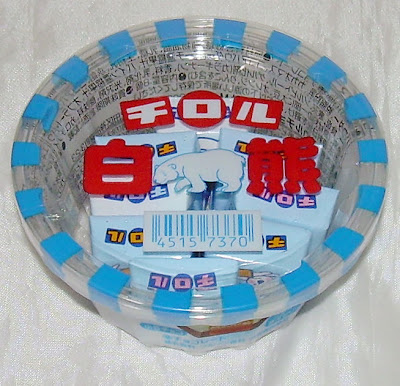 Sometimes I have no idea what drives the naming of a product, and this one has me completely baffled. Is it supposed to be chocolate that a polar bear might enjoy? Is it supposed to taste like polar bear? Is it supposed to be consumed cold? Or, is it really just about the fact that polar bears are cute and naming a candy like this after them is going to get all of the office ladies to buy it? Of course, there is also the possibility that there is some play on words (related to the kanji or Chinese characters) that I'm missing as a myopic foreigner with substandard language skills. 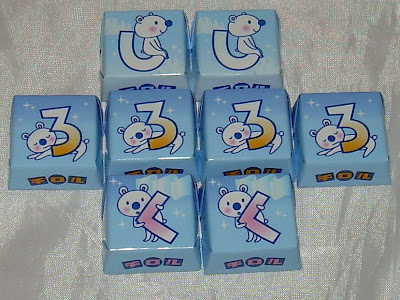 One point about the packaging of this is that it is in the same sort of plastic cup that you can buy mass market kakigori wannabes (shaved ice sweetened with syrup, usually fruit-flavored). The plastic seal around the top is very similar to the striped seals around those icy treats. Perhaps the polar bear is part of a joint campaign between a maker of one of those ice cups and Tirol. I don't eat them, and I couldn't find any in my local shops to compare.

The thing that drew me to this, after passing up so many of these types of packs in the recent past, was the fact that part of this is "mikan chocolate". "Mikan" is a Japanese tangerine. I was concerned that the white chocoalte part might be too sweet, but hopeful that the bottom layer would mitigate that. In fact, this tiny bit of candy (about 2 cm square/.8 in.) has 5 parts to it, though you can't really taste each one distinctly. 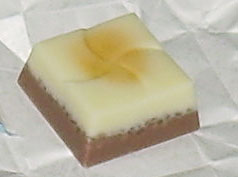 As soon as I broke the seal on the cup and removed the lid, I smelled a strong fruity scent. It was reminiscent of orange, but also something else. The center is generic "fruit jelly" and "mikan chocolate". One of the ingredients is pineapple and I thought melon might also be a part of the mix. Between these two parts is something called "zarame" which I had never heard of, but some searches indicated that it is coarse sugar. When I bit into the chocolate, this was quite crispy and crunchy. 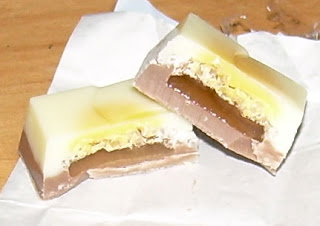 This was very, very sweet and intensely orange-flavored. I liked the textural contrasts with the crispy sugar, soft chocolate, and chewy jelly center. The flavor was something that I think is a tough sell because it's overbearing both on the sweetness front and the fruit flavors. I think this could have been a real winner with some dark or bittersweet chocolate to balance out all of the white chocolate, but this is not a classic "orange chocolate" combination so much as a very sweet orange taste.

Since I've had such bad luck with the non-premium Tirol candies as of late, I wanted to like this, but all I can say is that it's got cute wrappers and clever presentation on the packaging front. It made me want to buy it, but tasting it didn't make me want to buy it again.

SQUEE!!! The polar bear sitting on the shi is totally kawaii. It also looks like it's using the toilet.

The cuteness suckered me in...

One of the reasons you are the brilliant reviewer that you are (and you ARE) is that I see a nice wrapper design, and you see a polar bear sitting on a toilet.

I really was wondering what orange/tangerine essence had to do with polar bears...LOL. But, you're spot on in that dark chocolate would have probably made this a lot more palatable. It's interesting how many Asian cultures prefer non-overly sweet cakes, but they have super sweet candy. I could be totally wrong, but I find that true of various Chinese, Vietnamese, Japanese, etc., candies sold at Asian supermarkets.

In Poland (and in Germany, I believe that's where they're from) you can buy chocolates just like that named "icy kisses". It's plain, sweet chocolate without filling that is supposed to be kept in the fridge because any heat melts it right away - it's not true, they are shelved, but when you put one in your hand it starts to melt in your hand and you have an impression of barely touching the chocolate with your lips, hence the name.

Maybe there's a reason like that to name those chocolates polar:)

I'm an office lady. I'd buy it at least once based on the extreme cuteness of the packaging. I also love orange with chocolate, so I bet I wouldn't hate this. Gonna go track it down at my Asian candy sources in NYC now--thanks!

Shirokuma is a kind of shaved ice thing which is a regional speciality in Kagoshima.

It is shaved ice with condensed milk, fruit, and usually anko added on top of it. It is supposed to be really good, but I've never tried it.

They sell little tubs of it in my local combini, although I live on Kyushu, so I guess it might not be as widespread further away from Kagoshima.

Azzahar: I remember those chocolates! They're a bit on the darker side, right? I think in the U.S., they're sold in a sort of foil wrapper and have a polar bear on them.

CrackerLilo: Please share your impressions of the taste! I do agree that they are plenty cute.

Jimjamjenny: The ice things in shops here are just ice and syrup. I've seen/heard about the condensed milk version. They sound rich and decadent. :-) You can get them at select places in Tokyo, but I've never sampled one.

Thanks very much to everyone for commenting!

I'm actually pretty sure "white bear" (Shiro kuma) makes sense with the label since a Polar bear is white. What's really neat is the hiragana characters on the candies are all Shi's Ro's and Ku's which can be combined to make Shiro (White) and Kuro (Black) the two colors of a polar bear!