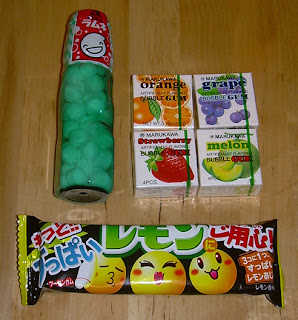 This post is a review of three items that are unified in two ways. All of them are round and I got them all as part of the Sakura Box monthly candy box. Note for my readers, November is KitKat month and they're offering 5 unique KitKat flavors. I mention that not because they sent me free candy (though they did), but because I know many people are especially interested in Japanese KitKats.

This is part of the selection I received in the October candy box and these are the types of small things that are very common in the kid's snacks section in Japanese markets. I am familiar with all of these things, and I once had the little boxes of gum with fruit illustrations on them, but it was so long ago that my aging brain lost the memory. Well, it's either my age or the fact that one isn't exactly stowing away such memories as if they were precious and not to be forgotten. It is, after all, only bubble gum.

Marukawa Fusen gum (upper right in the picture) is one that I saw around for pretty much the duration of my 23 years in Japan. It was often sold in multi-packs that included all available flavors, but also as individual packs of one flavor. I also often saw enormous tubs of it as prizes in UFO Catcher machines. I'm not sure who would want such a huge amount of these little pellet-shaped bits of gum, but I guess someone out there really loves it, especially little kids. 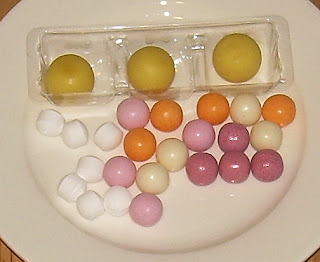 See? It is all round stuff!

The orange tastes a lot like Bayer's orange baby aspirin in the U.S., except with a bit more tartness and sweetness. The grape is your typical grape gum flavor. The melon is probably the weirdest one because it tastes strongly of quite sweet cantaloupe in the initial burst of flavor. In fact, it's rather too strong and my taste buds rebelled at first.

Fortunately, or unfortunately, all flavors of this gum have a very short half life on the flavor front. Within 5 minutes, pretty much all of the flavor is gone and you're left with some pleasantly soft and pliable bubble gum and a generic sweetness. Incidentally, I chewed all 4 little gum balls (each is about the size of a large pea) at once. I can't imagine that anyone would chew one at a time. As bubble gum goes, this is fine. It's nothing spectacular, but if you were a kid and wanted to stuff your maw full of a big wet blob of it and blow a bubble that would explode all over your face, this would do the trick.

The "tsuppai (sour) lemon" gum, which contains three larger gum balls but the wrapper said it was only 2 servings, is made by a company called "Meiji Gum". I should note that both Marukawa and Mei specialize in gum, which seems like an odd choice, but I guess it's what a lot of companies do in America as well. You just never think about someone saying to himself (it's usually a "him"), I think I'll start a chewing gum company. In the case of Marukawa, that was said in 1888, apparently. That's some forward thinking.

As promised, this is sour lemon gum. In fact, it was a bit too intense for me and I had to spit it out after a short chew. That doesn't mean it's bad. It just means I'm a sourness wuss, or that it didn't go over too great after chewing the sweet tiny little gum balls.

I give both types of gum an indifferent rating because they are pretty much just kid's gum in approachable flavors. The main benefit of them is that they have a good texture and carry an intense candy-like burst of flavor at the start. The main drawback is that the flavor doesn't last long and that once it drains away, you're left with sweetness (or sourness) and not much more.

Finally, I tried the ramune candy which comes in the plastic blue-green soda bottle in the upper left of the picture at the top of this review. It is made by confectionery powerhouse, Morinaga. If you don't realize it, they're the folks that are delivering HiChew to the world. These are pressed powder candies like SweeTarts, but they are looser and softer than those American sweets. If you bite down on them, they quickly dissolve into a soft blobby bit in your mouth. If you let them dissolve on your tongue, they yield slowly and release the flavor of bubble gum. They're sweet, but not overbearingly so and have a fresh flavor which is hard to pin down.

I actually like powdered candies like this more than the average adult. I'm not sure that I'd keep a stash around the house, but when I happen to buy one or are given one, I enjoy them more than I might expect and that was certainly so with this ramune candy.

You lucked out. Two of the three gumballs are normal sour lemon flavor, while one is super duper sour lemon (chou-suppai), and you found it!

Here is the webpage for the gum:
http://www.meigum.co.jp/product/sour_gum.html

Thank-you for continuing your blog, by the way. It's appreciated!

Thanks for pointing that out, Hiyodori! I didn't even notice that on the packaging, but I can see that is a point of this product! I'm not sure if it is "luck" or not, but it is a very interesting concept!