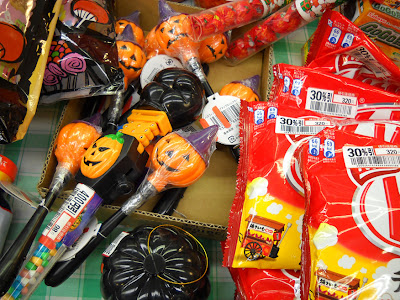 One of the things that was quite uncommon in supermarkets in Japan, even relatively pedestrian ones like the Seiyu chain, was bargain tables. At the local Safeway (which I see as the American equivalent of Seiyu), there is always a shelf full of crap that didn't sell, is slightly damaged, or has seasonal items that didn't sell which are heavily discounted. Mostly, it's pretty crappy stuff, but I have gotten some great prices on a few things (bags of Peet's coffee for $4 when it is usually around $8-9).

The picture above was taken at Peacock supermarket around November during my last few years in Japan. Those sad specimens are Halloween treats that didn't sell next to some sweet potato KitKat minis. I should note that 30% off is a huge discount by Japanese standards, and it likely meant that these were near or past their expiration date. Peacock had such a discount table twice to my recollection and they were the only store that did this at all in my particular area. I believe that most stuff got shuttled off to dedicated discount shops like Tsurukame or simple returned to the manufacturer (or trashed).

One of the the things about Japan is that quality and freshness mattered so much to consumers that they'd rather pay more for those qualities than score a bargain. This was something that I had both a positive and negative impression of. Often the willingness to pay more meant that goods made natively supported small business culture. The desire not to buy things that were old, even at a discount though, meant that there was more waste. As with all things, there was a yin and yang effect to the Japanese spending habits.
Posted by Orchid64 at 8:00 AM

99 cent stores here often have name brand food items at a steal... but you have to check the expiration. I notice some goods end up there due to packaging design change, promo/seasonal items or overstock.

I am a bargain shopper but I won't go for expired stuff, that's just asking for trouble.

Where I'm living, I don't see many 99 cent shops around, unfortunately. I saw a few in San Francisco (and loved them), but it seems I'd have to go poking around and out of my way to locate them here.