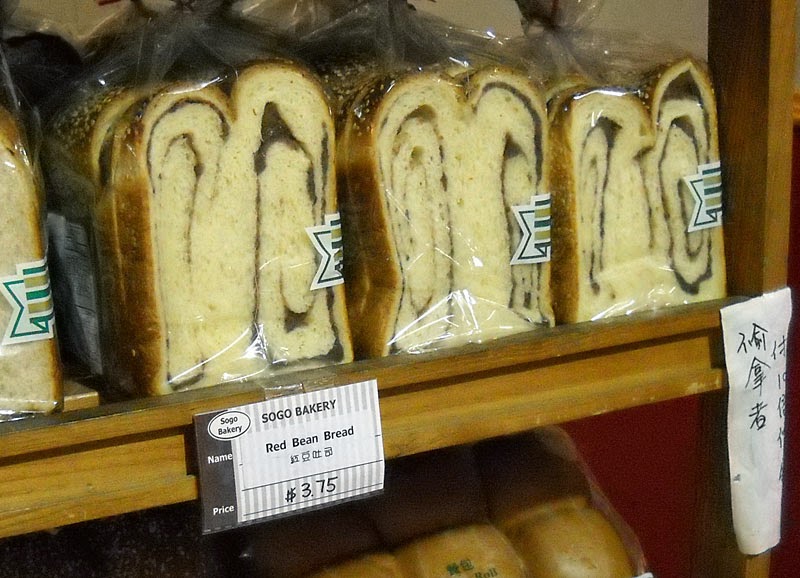 The red bean bread on display. (Click any picture in this post to load a larger version.)

One of my late pleasures during my time in Japan was "koshian" or red bean bread. I especially enjoyed a version sold at the "Good Morning Bakery" that was about a 10-minute walk from our apartment in Asagaya. I was hoping to have a somewhat similar experience with this bread after discovering it on sale at what had to be one of the cruddiest little Chinese malls in San Jose (in an area closer to Cupertino). 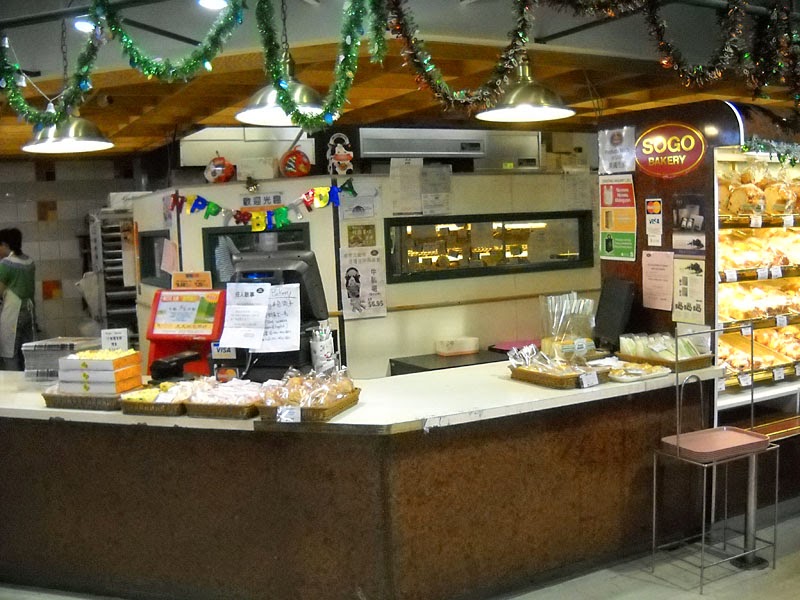 The counter that comprises pretty much the entire "store front".

Sogo Bakery is a chain that has its own branches as well as sells products trough the chain of 99 Ranch Asian markets. All of the branches listed on their web site are in California. I don't know if their products can be had elsewhere, but they appear to specialize in a variety of Chinese and other sweets and breads targeted at the Asian market. 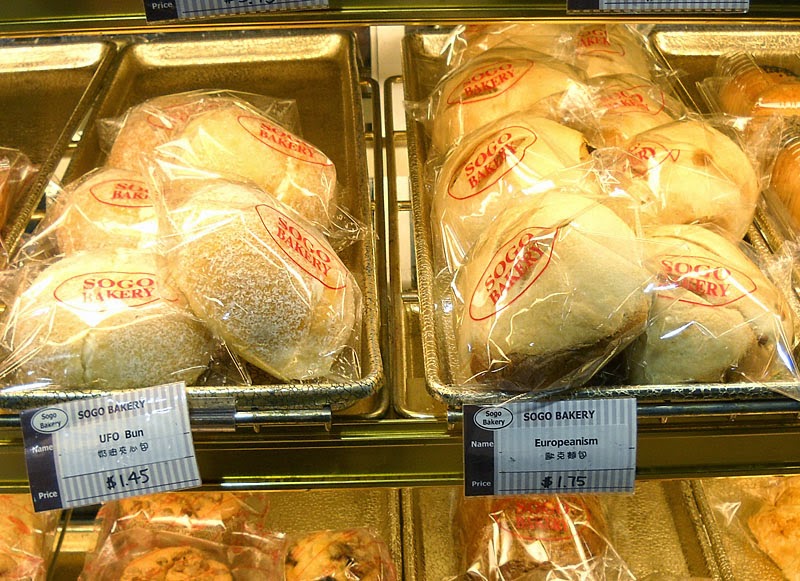 Apparently, UFOs are cheaper than Europeanism (whatever that is).

The one I went to in San Jose was at the front of a small mall that included a deli, a Chinese yogurt shop, a medicinal herbs shop, and some miscellaneous jewelry and other sundry items shops. The place was quite old and a bit dingy, though I have to say that it was worn, but not really dirty. When I used their restrooms, I noted that they were clean. If you want to know just how well-kept a space is, don't look at the middle of the floor space. Look at the corners. Most American bathrooms and older stores will have a built-up pile of crud in the corners where someone has mopped the floor hastily and a lot of it has been shoved into the corners. This place had clear corners, so someone is looking after it very well. Don't let old exteriors lead you to believe it's "dirty". 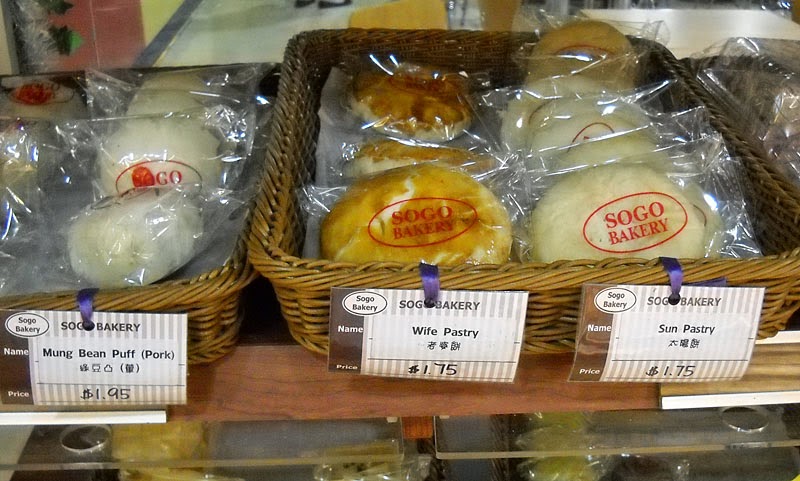 The entire little mall was very interesting because the menus for the deli were only in Chinese. You had to speak Mandarin to be employed there and my husband and I were the only white people in the mall. This is the sort of situation in which most people here who are not of the dominant ethnicity of the client base feel uncomfortable in, but so many years of being a part of an extreme minority makes us just fine with walking around what other Caucasians feel is an "alien" environment. Besides, that's where all of the good finds can be found! 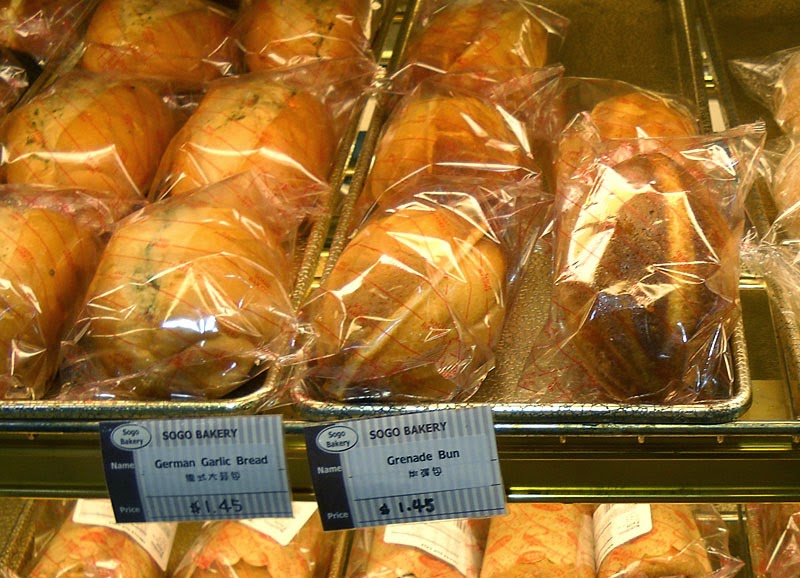 This option gives a whole new meaning to, "look out, he's got a grenade!"

The bakery was pretty much the usual affair for Asian places in that it had a pastry case full of elaborate decorated cakes, tarts, pies, and cupcakes in the front and less expensive bread options away from the cashier. A lot of the bread and buns were either European (including some pretty nice-looking garlic bread) or Chinese. There wasn't much in the way of green tea (so not particularly Japanese), but there were a fair number of bean items and a smattering of muffins. The prices were not especially expensive or cheap for this area. The best bargain, in my opinion, was the red bean bread at $3.75 per loaf. It's a lot for that price, and competitive with packaged, mass-produced bread that is not a store brand and is of higher quality. 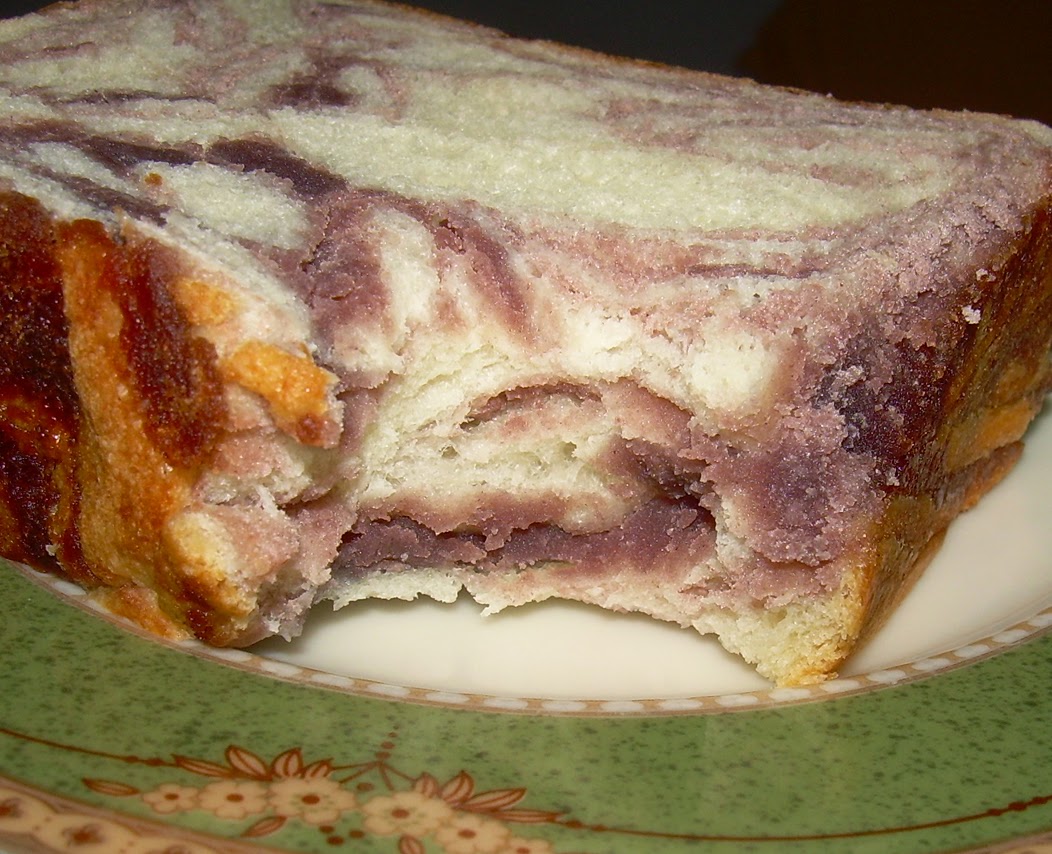 A view of the red bean bread (koshian), that I had in Tokyo from the "Good Morning Bakery". One fat slice of this cost about 300 yen or about $3. This was the standard to live up to.

Regarding the concept of bread with red beans, I know it sounds horrible, but it's actually a moist, lightly sweet, and utterly delicious concept. It's more akin to cinnamon-swirled bread or jam-swirls inside of a loaf of white bread than what you might imagine. It's moister and heavier, and I'd say it makes a "light" snack except that the bread is incredibly heavy and not particularly low in calories. 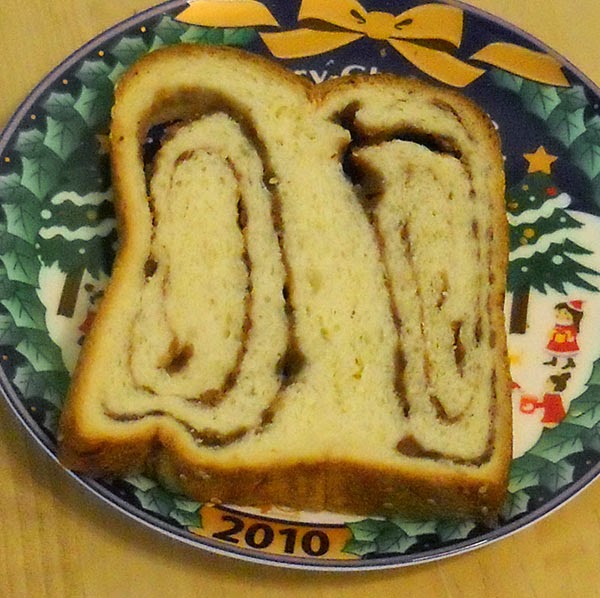 A slice of the Sogo Bakery red bean bread.

In fact, I weighed the loaf of bread that I bought before tucking in and it was 1 lb. and 11 oz./765 grams! It's got some heft from the weight of the bean paste. Each slice is a whopping 240 calories, though it does make a breakfast or hardy snack all by itself. 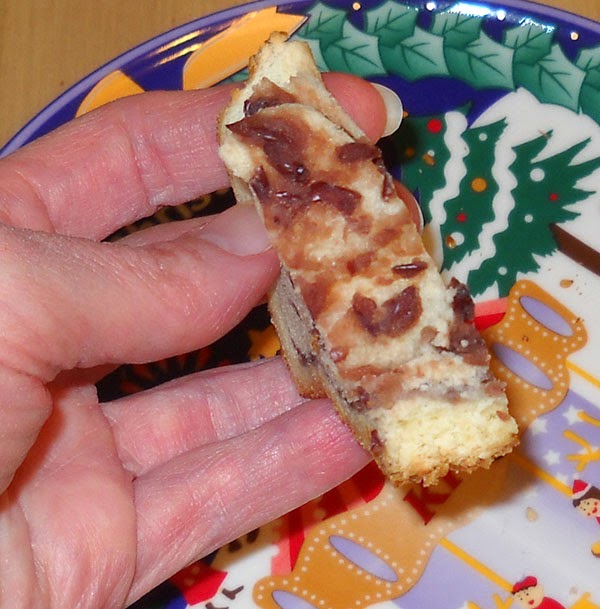 As you can see by comparing the pictures, the Japanese koshian is much more marbled with bean paste. It is in generous swirls that integrates almost completely with the bread. The Sogo Bakery bread has had rolled out dough spread with red bean paste and it was rolled up and baked. I get the feeling the Good Morning stuff took a lot more effort to get that much distributed through it. Clearly, I got more bean for my money from the Good Morning type and it showed in the taste. 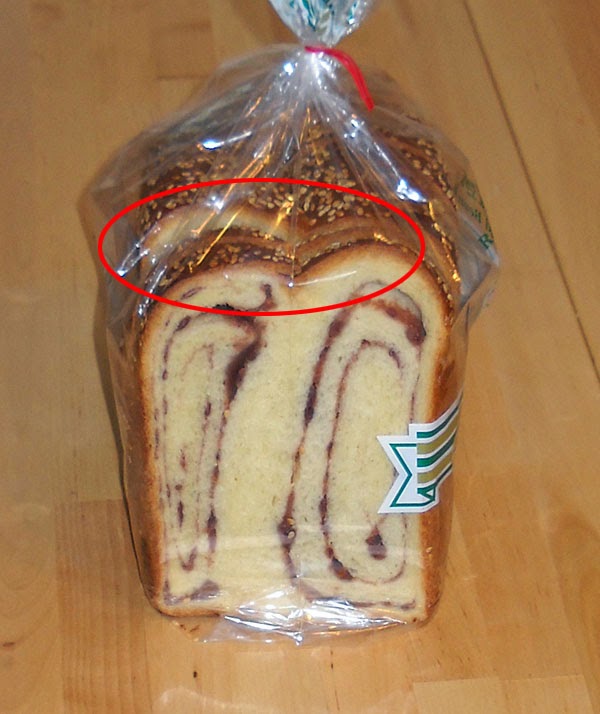 The red oval shows the misaligned slices that were changed to hide the plain end piece.

The bread is lightly sweet on its own and the areas with bean paste is a bit sweeter and carries the flavor of the paste. It's not intense, and that isn't a bad thing, but I would have liked more. The bread is fresh and soft and very good as a bread even without the beans. It makes me believe that their regular bread is probably pretty good stuff. 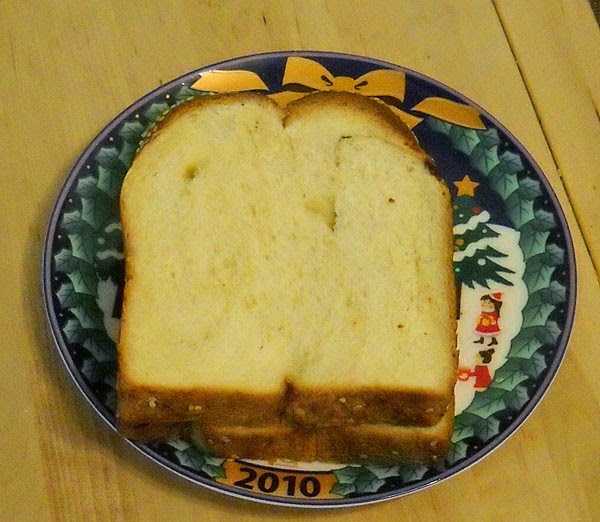 The hidden piece with very little in the way of red bean in it!

I also have to say that they pulled a little trick on their customers with how they package the bread. They take the outer two slices and turn them around so you can't see the end. I noticed that the two front slices seemed mismatched in terms of how the sizes lined up. It looked like they were cut off a different, smaller loaf, but then I realized they were just turned around to hide the largely plain on one side slice that was on the end. This is a bit of a cheap trick in my opinion. I realize customers won't be as attracted to the bread if one end looks plain and the other is a crust (and it is), but they should simply not include that slice rather than hide it in this manner.

Even with this little cheap trick and the fact that it wasn't as good as what I had in Japan, I'd still buy this bread again without hesitation. It's fresh, tasty, sweet, and a unique treat. I froze the loaf I bought after having a slice and I plan to have it as toast from here on (or rewarmed in the toaster oven while wrapped in foil). My experience in Japan with koshian was that it lost a lot the next day and freezing bread tends to slow down the quality loss. The only thing about this which I wish was different was the amount you buy. I would have preferred to buy no more than four slices at once since I'll be the only one eating it. It will take me a long time to consume an entire loaf. If you're near one of these bakeries (or see this bread in a market), I'd recommend picking one up and trying it. It'd be an especially good choice as a unique option at a potluck or as a baked treat for a party with open-minded friends.

... In a way, I kind of admire the cojones to rearrange a packaged bread product like that. But in another way, it's a bit of a slap in the face and I would feel vaguely cheated when I realized what they did.

I suppose it's not all that different from what food stylists do every single day.

I was totally surprised to see the Sogo bread, red bean version as well, in Safeway by my house! Yeh, Safeway...go figure.

Me: I can understand why they did it. I think it's cheap, but I understand it. I think that, in Japan, they don't do that. They throw out substandard pieces... however, this was really cheap compared to such things in Japan so it's like a free piece if you look at it from a certain perspective. I've finished the entire loaf by now (froze it and had one piece at a time nearly everyday). The crust and almost blank piece made nice toast. It's good bread without the beans. ;-)

Miyazaki: Wow, our Safeway does not have it! If you don't mind my asking, what city do you live in? That's really cool!