Though Asahi is best known for its beer, the "Asahi Group" makes other products including snacks, personal care products, and soft drinks. I don't drink beer, but, after tasting this bar, I think maybe they should stick to what they're best known for. 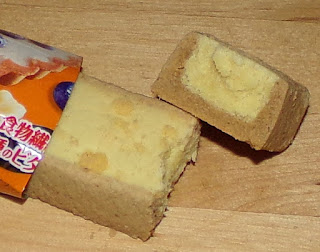 My expectations fo this were quite low considering that it's a nutritional bar/meal replacement type of thing. I didn't expect it to taste great, particularly since it's only 191 calories and a fairly dense bar. The information on the front tells me that this is 9% cheese and .29% blueberry. Though the picture on the package shows a ton of full berries lying around and embeddedin the bar, the flavor and appearance of them is completely absent in the actual bar.

The aroma of this is distinctly cheesy, and not in a good way. It is more like a heavily distilled processed cheese smell. Imagine what it would smell like if you boiled some plastic-covered slices until the odor intensified and you'll get a sense of it.

The taste is pretty funky. There's the odd discordant sense of sweetness mixed with a traditionally savory cheese (Gouda). The texture is crumbly and dense. It looks chalky, but it is more like a shortbread. The bar is very fatty and has 10 grams of fat. There is little to distinugish the "crust" of the tart from the filling in terms of taste or texture.

This is more of a cheese cookie thing that a tart or even a meal bar. It's the sort of weird food that people either have a taste for or they don't. I actually liked the texture, but I did not like the taste or smell.

Note: This was part of my free ZenPop snack box.

This type of snack is popular in Japan. I have a question for you. Are there any nutritional bar snack in the US? I'm interested in American snack, too. I'm looking forward to hearing from you.