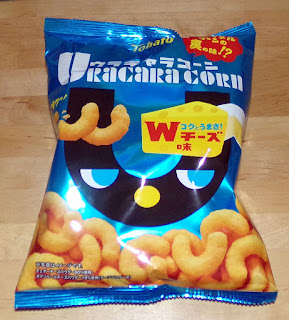 In England, I'm told that many people refer to any vacuum cleaner as a "Hoover" whether it is made by the Hoover company or not. And, in the U.S., very few people call a facial tissue anything but a "Kleenex" regardless of whether they're blowing their nose into that brand or not. In Japan, staplers are called "Hotchkiss" because that was a popular brand there. It's certainly not uncommon for a brand name of a product to become the name of the item.

Based on the naming of this product,  I'm wondering if "caramel corn" is something people see as representing any product which looks like a curly puff whether it is sweet and contains caramel or not. I have sampled this and there is no caramel in it, though there is corn. 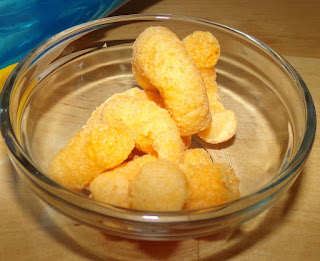 This is a fairly standard cheese-flavored corn puff. The texture is a step above what we tend to see in the U.S. It's lighter, crispier, and lacks the "foam-like" texture you sometimes get in cheaper versions of corn puffs. The texture really couldn't be more appealing. The cheese flavoring is fine, but a bit on the subdued side. This is odd since the ingredients state the flavoring is 80% cheddar cheese and 18% Camembert. The Camembert hits as a finishing note and is distinct, though not potent. It will vanish entirely if you gobble too many down and your tastebuds acclimate to it.

Shockingly, one of the ingredients is "caramel powder," but I couldn't taste it at all nor was there much sweetness despite including Sucralose in the ingredients. If you do the math, the caramel powder is only 2% of the flavoring so it seems that it's there mainly as a token and to validate the naming.

There are some savory powders added in to improve flavor depth (e.g., katsuobushi or fish flavoring) but this still felt like it could use more of a punch. It's possible that my tastebuds after seven years back in the U.S. have lost their ability to detect subtle Japanese flavoring and that I'd have picked up on more of this had I not been "ruined" by life back home, but I tend not to eat too many salty snacks made here anyway.

This was a fine corn puff snack and I wasn't disappointed, though I felt it could have been more. I'll finish the bag for sure, but I won't be craving another.

Note: I received this product as part of my free ZenPop snack box.

Your story about Hoover and Kleenex is interesting! Actually, I will imagine an exact snack when I heard caramel corn. I used to have it when I was small. So your post reminded me of my childhood. Thank you!!