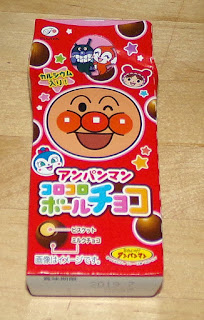 Though these balls are chocolate coated bits of crunchy cookie, they are kin of M & Ms in a way other than being small and a chocolate coated confection. They melt in your mouth, not in your hands according to Fujiya's web site. I'm guessing the fact that the claim is in Japanese will keep them from being sued for slogan theft.

These are fortified with Calcium derived from egg shells so you could claim these were healthy treats, but you'd be a liar because the first ingredient is sugar. Sugar is the great destroyer of nutritional value when it's quantity eclipses all of the others by a large margin. 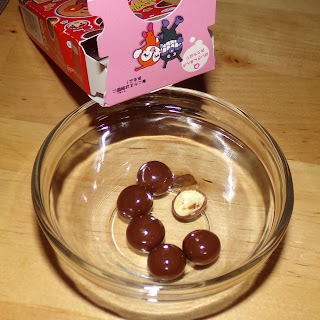 The ball pictured on the box is about the same size as the actual candy. They're similar in size to a pea. The interior biscuit is the weaker of the flavors in this candy. It's such a tiny amount and mainly is there for crunch, but you can catch a faint hint of it on the first one or two of these that you eat (before your tongue is overwhelmed by the sugar and most of the subtle flavors are cancelled out).

The chocolate on the outside is firm and seems coated with something to help it not melt. It has a nice flavor, but it's not the strongest cocoa flavor that you're going to encounter in a candy. I loved the texture a lot, but I'm big into crunchy things. There isn't a ton of complexity there, but these are still fun to eat.

The boxes for this candy each feature a different pair of friendly characters from the Anpanman cartoon. There is something sweet about their expressions and it's probably a cool little bonus for fans of the show.

Note: These were part of my free sweets box from ZenPop.

Your clear explanation about this snack help me imagine what it is like. Recently, I haven't eaten this type of snack, so I want to try it next time!