I'm a sucker for anything chestnut, but I haven't been keen on white-chocolate-based Crunky bars since trying the caramel latte bar. It's not that there was anything so wrong about that bar, but I haven't been wowed by the Crunky variants. Like plain KitKats, the regular milk chocolate version of Crunky seems to always be superior to the imaginative flavor offerings.

For those who are unfamiliar with Crunky, it's Japan's version of a Nestlé's Crunch bar, which is available in Japan, but in limited markets. The main difference between Crunky and Nestlé's bar is that the former is made with crispy rice and the latter with malt puffs. That makes the crispy bits in a Crunky carry more of a cereal flavor in addition to adding texture. In Nestlé's bar, the crispy rice bits don't do much for the flavor profile. 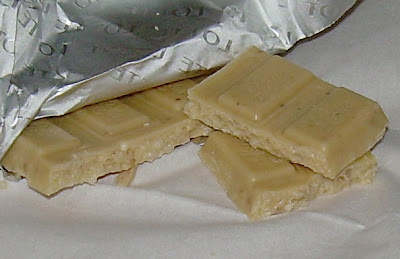 This particular Crunky smells a bit like coffee and caramel, but in a very subdued way. One of the ingredients for this is caramel, so that part isn't surprising. I think that chestnut often carries a bit of a muted coffee-like flavor. One of the other ingredients if tamarind, a fruit that is used to make jams, drinks, and frozen confections in some Asian countries. It's also a natural laxative, though I'm hoping that has nothing to do with this bar.

The sweetness of this is not too overbearing, and the chestnut flavor seems light and earthy. It has the sense of tasting like real chestnuts at about 50% their actual intensity. Since chestnuts aren't powerfully strong anyway, it's just a bit more muted than I would prefer. I would have preferred a richer taste and I think a little salt might have developed the flavor profile a bit better.

One of the things I like about Crunky is that it gives you a lot of great texture without too much sweetness. That being said, I have to ask myself if I would buy one of these bars again. As decent an experience as this was, I'm not sure that it's an experience worth repeating, particularly if you're calorie conscious (and I am). The entire 48-gram (1.7 oz.) bar is 269 calories. There are 24 little blocks and each has 22 calories. For such a small amount of pleasure (about half the volume of a Hershey's kiss which weighs in at 25 calories), I'm not sure it's worth a repeat beyond the novelty of a first experience.

My girlfriend is a big fan of chestnut, too. As far as chestnut-flavored snacks go, what would you recommend?

Unfortunately, now is not a good time for marron snacks as they tend to show up in abundance in autumn. That being said, if you can still find them, I'd recommend the Meiji marron chocolate bar:

I also really loved the Morinaga caramels quite a lot:

The caramels are probably easier to still find since so many of the classic Morinaga caramels are carried all over the place in little boxes. You may not find the bag that I reviewed, but if you can find the milk, green tea, and black sugar caramels in boxes, these might be there, too. They really were fabulous!

Thanks for commenting and reading!

Indifferent is a great word for Crunky. They even manage to bungle flavors I love (like matcha, and now chestnut) with excess blandness.

Hi, Ebidebby, and thanks for commenting!

I'm just about at the point of giving up on Crunky variation bars. It's not because they're so bad or anything, but just that they're never that good either and my plate is too full for something which I'm pretty sure isn't going to impress me!