There are bins full of kid's treats that I keep meaning to get to, but I'm distracted by all of the adult-oriented shiny things and never get to them. Pushing myself to review this Meiji Petit Assortment forces me to deal with a lot of them at once. This assortment is very petit. If it were a woman, it'd be Nicole Richie in her less than zero size dress. Each box has about 10.5 grams (.37 oz.) of candy and about 6 cm x 2.5 cm x 1.5 cm in size (2.4" x .98" x .6 in.). I picked these up for 139 yen ($1.54) at Okashi no Machioka discount sweets shop. The entire pack is 277 calories, which averages out to about 55 calories per box.

Since these are designed for kids, Meiji sweetens the pot a little for them by making the back of the boxes super cute little cards (called "trump" in Japanese). They call these rock-paper-scissors cards and you'll see tiny little hands in circles in the corners of the cards. I'm not sure how one is supposed to use these both for kiddie poker nights and viscous rock-paper-scissor battles, but I'm sure young imaginations will certainly prevail.

Here are reviews of each of the components. Note that the pictured quantities are exactly what is inside of every tiny box so you know what you're getting: 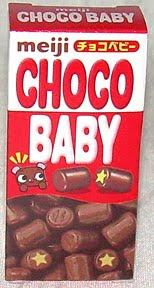 Choco baby are tiny little pellets of candy. They're so small that it is difficult to pick them up with my fumbling adult fingers. Some of them have little stars on the end of them and a few have smiley faces, but most of them are plain. I'm not sure what the point is of this because they all taste the same. I guess it's just to tickle kids' fancies (possibly a felony in some states, but clearly legal in Japan). Note that the stars are not nearly as clear as those shown on the box, and that there were only 5 or so of the star-style ones in my box (and two smiley faces). 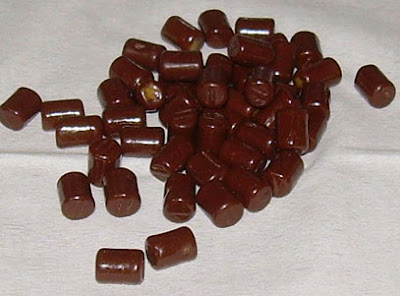 The candy itself is pretty much standard Meiji milk chocolate with more of a glossy exterior. It's solid chocolate pellets. If your hamster could crap chocolate (and wouldn't that be some hamster), it'd be Choco baby. This was fine, but really nothing special. Note that these can get to look pretty nasty if you don't get them fresh. Candy Yum Yum has a picture of them after they've seen some miles here. 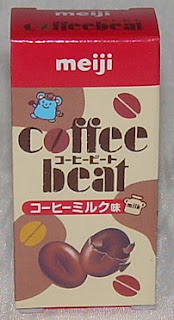 If you ever said to yourself, "self, I'd really like some coffee M & M's", then Meiji heard your wish. Coffee Beat are lovely, shiny little candy-coated chocolate bits that have a really good balance of coffee bitterness, sweetness, and milk chocolate. You also get a real sense of a nice candy shell coating. 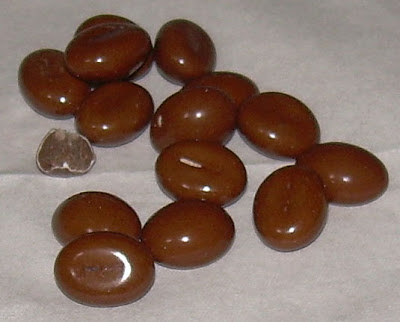 These are not just a coffee M & Ms, but about the best version of one that I think you can imagine for a consumer-level product. By far, these were my favorite from this assortment. 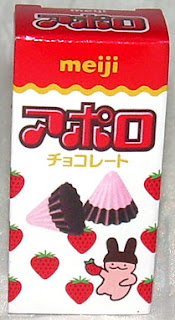 Apollo are tiny little ridged cones of chocolate and I'm guessing they are named for their resemblance to Apollo spacecraft. That's irresponsible, but harmless speculation. I have no idea why they are called what they are. 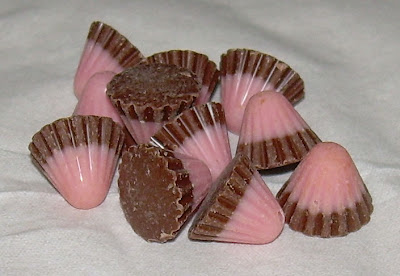 The entire contents of the little box are pictured above. These smell a bit like strawberry and have an even fainter scent of chocolate. The flavor at first is rather harsh strawberry mixed with bittersweet chocolate, but that gets muted quickly and you're left with a very flavorful chocolate morsel (about the size of an M & M). The strawberry flavor fades and seems to just add depth to the chocolate flavor. Even though I'm not a big fan of strawberry chocolates, I did like these. 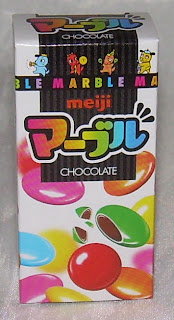 I expected these to be just like M & M's, but they are actually a little different. They are definitely sweeter and the candy shell has more of a generic "candy" flavor than M & M's. In fact, the chocolate flavor is so subdued as to not register much at all. It's more of a faint aftertaste. 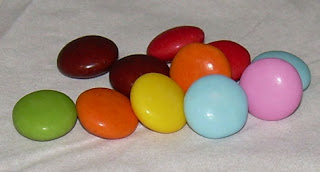 Among the items in this variety pack, this was probably the one I was least thrilled with. There weren't many of them, so I ate them all, but I wouldn't have finished off a larger portion and I wouldn't buy these as a separate item. It's not that they bad, but they just weren't that good, and I really wish there had been more chocolate in the "Marble Choco." 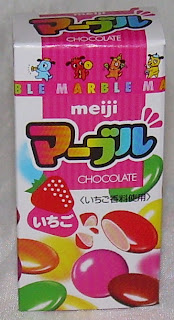 There's not much to the strawberry version of the "Marble Choco". It's really just your standard, fairly sweet strawberry chocolate. It doesn't have any nice tangy or sour strawberry notes. It's dominated by the strawberry and the interior is pink, so it is white chocolate-based rather than milk. 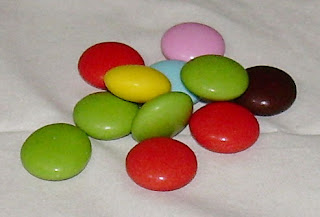 These were by far the least appealing of the assortment, and even though the portion was very small, my throat burned from the sugar after eating them.

Everything that is in this assortment can be purchased in a larger portion in individual packages. I could definitely see buying the Coffee Beat again on its own. I wouldn't bother with the Choco Baby because it's just chocolate in a different form and there's not much in that for me. I'd be just as happy with chocolate in bar form and see no point in the pellets. Though I liked the Marble Choco and Apollo and I enjoyed eating them, they didn't wow me enough to want to buy them again. They weren't unique enough for a repeat buy (though I do like the tiny portions which facilitate calorie control), but I certainly have no qualms about recommending others give them a try.

I'm giving this a conditional happy rating. Though I don't expect to buy this particular assortment again, I did enjoy it all to varying degrees (the least would be the strawberry Marblo Choco), and I will buy Coffee Beat again. I have to give it a happy rating for that if nothing else.

I used to buy these quite a lot, in an effort to eat healthily but still allow myself tiny portions of sweet things... but I always found that after eating one box I was never satisfied. So they're good for calorie control if you have any degree of self control, which I, unfortunately, do not.

I think the choco baby things have a slightly caramel taste to them, or maybe that's just my brain assuming that there is a caramel flavour there because the inside is caramel coloured. Hmm!

Hi, jimjamjenny, and thank you for taking the time to comment and to read. I took a very long time to complete the full review because I ate one box at a time (and kept the rest in the refrigerator. One thing about snack reviewing is that it has really allowed me to be satisfied with eating less because of all of the purposeful eating (smelling, tasting slowly, noting texture). I can understand though that it can be hard to not eat more than one tiny little portion (and the portions are miniscule!).

I didn't detect any caramel in the choco babies and the interior of the plain ones was the same color as the exterior. It could be you're more sensitive to certain flavor notes than me. :-)

It's also possible that I only looked at the inside of one of the ones with stars on, and assumed they were all like that on the inside...!
It's a good thing I'm not a snack reviewer really! Hehe.

Oh, Coffee Beat! They used to sell them in smaller, more grown-up boxes (and a less-sweet variety?), but the smaller size didn't really do it for me. ;)

That being said, be careful with the full-size tubes of Coffee Beat, especially if you're watching calories. They go down so easy that they're gone before you know it. Mmm. (I just realized I have some minipacks in the house! Better do something about that...)

I love these kinds of little japanese kids' candies!
I've tried those Apollo and Marble ones before. I think they're by no means "quality" candy, but ther are cute and fun. ^o^

Those Marble Chocolate look and sound alot like something we have here in the UK called Smarties. They're pretty cool!

Coffee Beat is my father's favorite Japanese candy. They are quite good, but I never seek them out for some reason.

I bought these years ago at a market in the Chicago area, so it's fun to see they still make these little packs :)

Oh wow! I have had the little Meiji candies with the playing cards in the back. I actually wrote about them in my blog too. My foreign exchange student brought me some in 2007, the packaging was really cute. Your pictures are much better though, I used a crappy phone to document my candy.