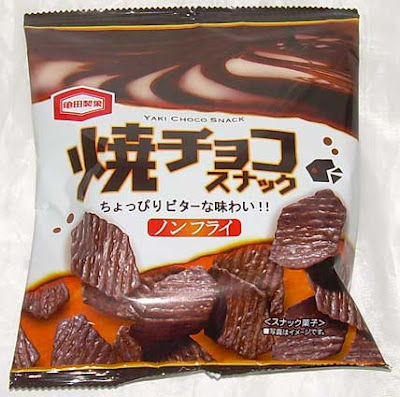 Every time I go to Seiyu supermarket, I find that there is a whole world of goodies that I can't find anywhere else. Their selection is bigger, but they also seem to carry a different assortment than other markets. One of the things about snack blogging is that you keep finding every shop is a little treasure trove of unexpected finds. Even when the shops all look the same, the stock is different to some extent.

These "yaki" (grilled) chocolate snack chips grabbed my attention because they aren't fried. That usually is a cue for lower calories, though I can't say that is always the case in Japan. I can't remember what I paid for them, but I think it was something in the vicinity of 130 yen ($1.40). They are made by Kameida Seika, a company which I favor for their sembei. 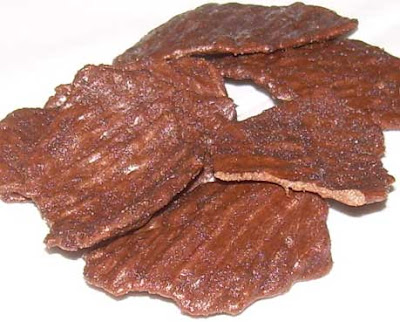 These chips don't smell like much, and at first, scent and taste match one another. There is a cocoa flavor there, but it's not carried to the taste buds by much. They really need more salt and some sort of sweetener. It doesn't have to be sugar, but maybe a little more Sucralose (which is one of the ingredients already). Cumulatively, the chocolate flavor starts to build up a bit, but not in the way one is accustomed to chocolate flavor as it is delivered with copious amounts of fat and sugar. It's more of a diluted flavor reminiscent of cocoa nibs at about 10% of their power.

These chips are designed as much for their wonderfully crunchy texture and low calorie nature as anything else. The entire bag is 45 grams (1.6 oz.) is only 198 calories. You could sit down with a cup of coffee and eat the whole thing with limited guilt. As is often the case with Japanese chocolate products, they're designed more toward the bitter end than the creamy, sweet experience you get with a lot of Western chocolate.

I liked these. They reminded me of diet food back home, but in a good way. I'm not sure that they would be as appealing to others as they are to me, but texture is half the battle when for a food becoming a part of my diet. If you don't judge these by their distance from a chocolate bar, and think of them more as a much, much milder chip version of an Oreo cookie's non-creamy part, you may enjoy them as well.