I vowed some time ago to stop buying bags of KitKat minis in order to review them. Most of them are simply not worth having such a large quantity of and it takes forever for me to eat them. With summer coming on fast (as it always does in Tokyo), I have to keep chocolate in the refrigerator or risk it melting away. I decided that I'd only try these oddball flavors if I could find a single mini on sale at a convenience store. This tends to end up with me trolling all of my local "conbini" for single minis on sale, and mainly failing. Frankly, I wish Nestlé Japan would either stop selling things in big bags of mini bars or improve their distribution of lone minis in convenience stores. It'd sure make my life easier.

During the Golden Week holiday, a week with a string of national holidays in early May, my husband and I took a very long walk and stumbled upon a 7-11 that had the mixed juice mini that one of my commenters had told me about. One bar was about 40 yen (44 cents), I think. The truth is that I didn't save the receipt or pay much attention. I was just glad to find a single mini on sale somewhere and opened my wallet and tossed money on the counter. I had also seen this reviewed, rather unfavorably, on Jen's KitKat blog. My expectations were appropriately low.

This smelled rather "fruity" in the way that I remember children's "tootie fruitie" types of candies when I was a kid. It's like an indistinguishable mishmash of fake fruits. I think that Juicy Fruit gum has a not dissimilar scent, though the intensity of the aroma coming from this bar was far less than with that gum. 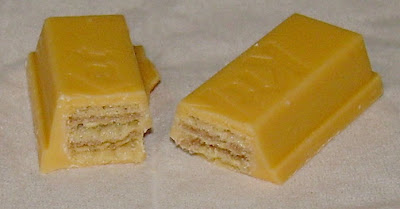 The first taste of this was of apple. Note that the wrapper doesn't show apple, and Nestlé Japan's web site says that the flavors are peach, strawberry and banana. They also indicate that this is "fresh and sweet" and ideal for family get togethers during Golden Week.

The second flavor was banana. I really didn't detect anything else except rather sweet white chocolate. The ingredients list doesn't reveal anything about the fruit used in this, but it does let you know that the orange coloring comes courtesy of paprika. Note that there is no calorie information on my package, but I'm guessing this is in the 65-70 calorie range, as is often the case with mini bars.

This wasn't bad, and I kind of enjoyed the fruitiness of it in a nostalgic way. It isn't the sort of thing that I'd like to eat again and again, but it was an interesting sampling. If you're pretty open-minded about sweet white chocolate and fruity flavors (particularly fake ones), you might enjoy a nibble of this. I definitely wouldn't recommend buying a big bag unless you're sharing with your office or friends. The bottom line is that I don't regret having a few bites of this, but I wouldn't buy it again.

I agree with your Juicy Fruit comparison! I prefer the gum to these.

I tried one of these last night walking home from the station. It was 41 yen at 7/11

Actually I really liked it, I tasted many layers of fruit flavor, I did taste the peach and something a bit citrus like.

I have quite a sweet tooth, so these do appeal. ;-)

Thanks to all for taking the time to comment and for reading!

Saramari: My husband, who can't eat sweets at the moment, said he thinks that he would have really liked this as well based on my review. I'm always aware that we all have different tastes and try to account for that possibility in the review. I think we all have different sensitivities to flavors as well, and would probably have liked this more if I had detected some citrus flavors (as I love those!).

cinabar: I think you may indeed enjoy this!