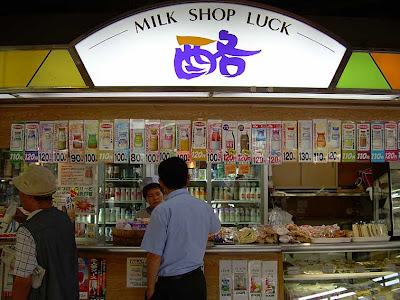 A kiosk in Akihabara sells a vast array of milk drinks.
When I first came to Japan, I was surprised at the array of milk beverages. They don't just have low-fat and whole milk, but they have a wide range of fat concentrations from 0% to 4.4% fat. Skim milk with no fat is actually a little tricky to find, though low fat milk below 1% is common. There are also many flavored milks. I recall a product called "The Coffee Milk" (in English) that caught my eye when I first arrived. Fruit-flavored milk drinks and milk flavored with more native flavors like green tea and kinako are also available depending on the season. Note that all milk that I have encountered in Japan is cow's milk. These variations do not include sheep's milk, goat's milk, etc.

Japanese people tend to drink milk for health purposes rather than enjoyment in my experience. I've never had anyone say, "I love milk." As a kid, I grew up adoring milk and my family went through copious amounts of it so seeing milk as a healthy beverage rather than for pleasure was not something I was accustomed to. One of my former coworkers at a Japanese office used to drink a liter of it every day for his health. His colleagues (not me though) nicknamed him "gyunyu-san" ("Mr. Milk") for his habit. He didn't like that, unsurprisingly.
Posted by Orchid64 at 12:00 AM

I've never had anyone say, "I love milk."

My husband is allergic to milk...(Japanese) so not only do I never hear it as well, but the milk I buy is meant for me alone. Feels uber strange, because I too grew up loving milk along with my entire family.

Though Japan seems to be obsessive over the 'milky flavors' that taste sweet, unlike the real thing. :^P

Hi, Jessica, and thanks for commenting! I'm sorry that I haven't added you to my blogroll yet, but I'm going to get to it just after I reply to your comment!

I wonder if the majority of Americans love milk as I've known just a handful who do not (one of my friends isn't a fan, but my family and husband (who is American, too) love it. My husband would probably drink it more often if it weren't so filling.

You are right that sweet milky flavors are popular. I guess this may have something to do with seeing milk differently than us - like a soft drink perhaps? I'm not sure. I think I need to ask some students to get their take on milk drinks. It's a topic I have never really talked to them about.