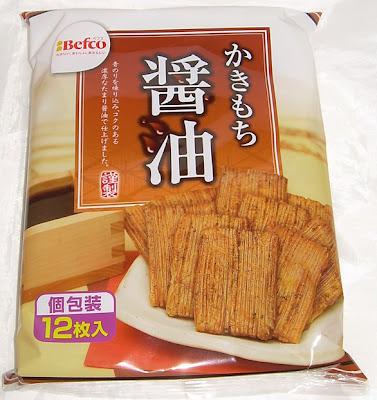 People love to build lists of "you know you've been in Japan too long", and I always find them to be attempts to be a little too cute and clever, not to mention sometimes insincere. That being said, I have definitely witnessed some peculiar and authentic "you've been here too long" behaviors. One of them is when foreigners who are speaking Japanese on the telephone and they actually start bowing near the end of the call. Yeah. They do that, but I don't.

For me, I think that one thing that is an indication that I've been here "too long" when I have gone from thinking soy sauce rice crackers are too common and pedestrian to be worth my attention. Since I grew up in the rural northeast, rice crackers unless they were the type of pressed puffed rice cereal discs sold by Quaker, were not something I encountered. I first experienced them in Japan and I've been here long enough to see them as "old hat".

Considering my expression of the yawn factor of soy sauce flavored rice crackers, one may wonder how I came to review them. The answer would be that I am cheap. Several types of Befco rice crackers were on offer for a mere 69 yen (84 cents) at Okashi no Marche snack shops. This is between 50-70% of the usual price. I'm guessing that this is because they are close to their expiration date at the end of April. I've noticed that Okashi no Marche has the lowest prices among all of the snack shops in my area, but that's because they seem to be a repository for some of the more mature cases of snacks. That's okay though because most of the expiration dates are conservative anyway. 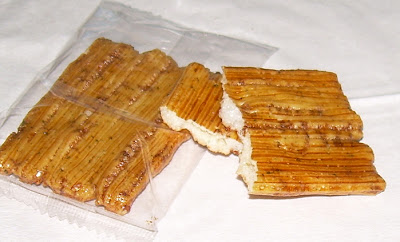 There are 12 individually wrapped largish crackers in the bag and they are flavored with soy sauce and nori. They taste rather savory and have a familiar cooked soy sauce flavor. They are neither too intense nor too bland and are unsalted but carry enough salt in the sauce. Two of the ingredients are coloring agents (caramel coloring and annatto), which I guess goes to show that brushing soy sauce on crackers isn't sufficient to paint them brown enough to make them visually appealing to customers. The texture of these is light and crispy. They're hard and slightly brittle in a way that makes them a nice substitute for chips. At 17.5 calories per cracker, they're a little less fattening than chips.

I liked these just fine, though I'll be honest and say that soy sauce isn't really my top choice of flavors. It's not that I dislike it or anything, but rather that it's not the bee's knees for me. If I saw these for full price, I wouldn't get them, but if I had a chance to get them for such a low price again, I'd pick them up.