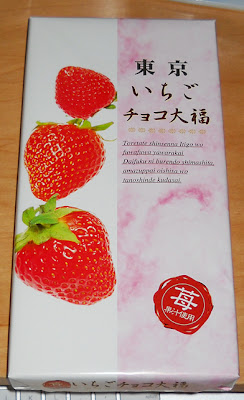 My husband and I took a trip to Odaiba, an artificial island in Tokyo bay, several weeks back. With a country as small as Japan, you'd think they'd be busily building up as many artificial islands as they can to expand their territory, but this is the only one (so far, and that I personally know of). That being said, with a birth rate of 1.4 per children per couple, I guess they don't really need to worry about things becoming crowded any time soon.

The Odaiba area is known as a popular shopping and tourist spot for the younger set, but I dragged my 46-year-old bones out there and tried not to look too out of place as both an "old lady" and a foreigner (no quotes necessary on that one). It's known for it's architecture and views, but it should also be known as a place in which you have to pay to walk into a lot of buildings. The Fuji Media building, which has a spherical structure on about the 9th or 10th floor, charges 500 yen ($6.04) just to go up there and visit a shop. Similarly, the Joypolis, a gaming center, also charges 500 yen to get in. The charges wouldn't be so bad except that once you get into these places, you have to pay for anything that goes on or is acquired. It's essentially being asked to pay to walk in the door and then pay more. I guess you can get high school kids to do that, but not this old duck.

There is a shopping and restaurant complex there called "Aqua City" which had no less than 3 branches of the same souvenir shop. They carried the requisite "Hello Kitty" crap as well as lots of "Tokyo Banana" snacks. Ultimately though, we settled on the pictured box of strawberry chocolate daifuku as our souvenir treat for the area. Note that though I do not review every Japanese sweet souvenir that we buy, I do buy something on the traditional end of the spectrum every time I go somewhere of note. This is part of how I cap the experience.

Though food-based souvenirs that one procures in the area one visits are common, I honestly do not believe these are in any way unique to Odaiba. In fact, a few weekends back, my husband and I were strolling through a game center in Shinjuku and found that one of the UFO Catchers (a claw game) had this very sweet in it as a prize. So, in terms of where you can get this, I imagine that they can be found in many different places, but rather unpredictably so. We paid 650 yen ($7.85) for our box of about 18 small (about the size of a quarter or 100-yen coin). If you're really skilled at claw games, you might be able to get a box of them for about 100 yen ($1.20). 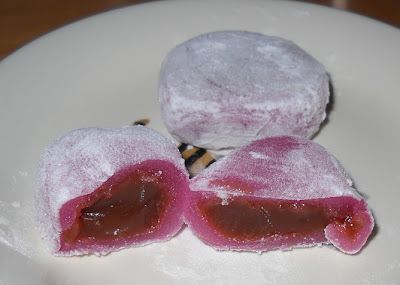 For those who don't know what daifuku is, it's a mochi (pounded rice cake) ball with a filling stuffed in it. The mochi is usually bland, soft and a little chewy and the filling ranges from various sweetened beans to custard to ice cream. These ones were very, very soft and had a great texture both in the velvety chocolate filling and the rice cake. Though they smell like strawberry, the strongest element is the pleasantly chocolatey interior. I'm not a big fan of the strawberry chocolate combination (these were my husband's souvenir choice) but it works here because neither is incredibly potent and the strawberry is so weak overall as not to compete with the rich chocolate filling. The only "bad point" about them was that they were liberally covered in a flour-like substance that immediately fell all over my shirt when I ate one.

These were delightful, and we even served them to a guest and she really liked them as well. They are an excellent souvenir and have surprising longevity for something which really needs to be kept fresh (since mochi gets hard when it goes stale). It took us three weeks to finish the box and the last was as good as the first.

holy crap, i can't believe you're still posting with all the crazy earthquake stuff going around you. i bow to your dedication.

oh, and daifukus are yummy. :)

please let us know how you guys are doing!

Actually, my posts are queued ahead for about a week on this blog and two months on the other one. I haven't been writing anything since the quake. It's hard to focus on anything, though I expect to do some writing tomorrow if everything continues on the upswing.

And I'm still okay. The foreign news is fear-mongering like mad. I'm amazed at the lies being spread in order to whip up the maximum amount of panic and hysteria. Things aren't good, of course, but people are talking about the nuclear issues as if we're all going to die from poisoning for certain, even as far away as Tokyo.

I really enjoy your blog, and I'd love to add something food-related to the conversation, but since it's been mentioned... How bad is the situation there REALLY?

With all the conflicting reports I'm having a hard time figuring out what's real, my neighbors here in California are stocking up on iodine tablets, it's a bit crazy.