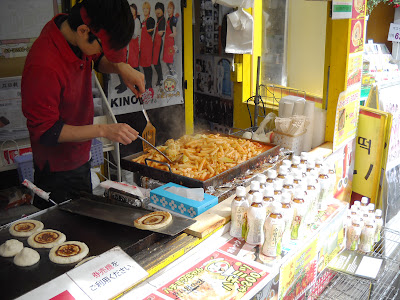 There are parts of Tokyo which can be described as "Korean towns/districts" and my husband and I walked through one a few weeks back. We came across this food stand selling a type of pancake that it called "Jongno Hotoku" as well as something the Japanese call topoki (what the Koreans call "tteobokki", I believe). The topoki is a spicy  mix of rice tubes and what looks like a tomato-based sauce. The truth is that I've never had topoki, but I did once try a Korean salted snack based on it. The snack was slightly sweet and tasted like bell peppers. 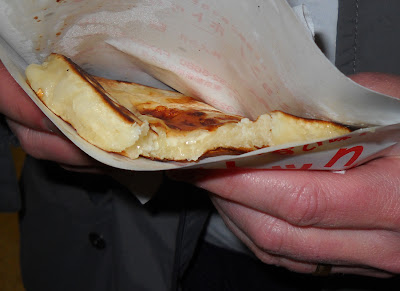 The cheese pancake.
The jongno hotoku pancakes could be had in cheese, red bean or honey flavors. We tried the cheese and it had a somewhat chewy texture and tasted a bit like a conventional pancake. My feeling was that it was too bland, and needed some salt to bring out the flavors. It didn't help that the cheese that was used was processed and pretty flavorless. Still, it was only 200 yen ($2.40) and not a bad food stand snack. Next time, we'll probably try the honey version (my husband isn't a red bean fan).
Posted by Orchid64 at 12:00 AM

I hope you're doing well in Tokyo.

When I was in Kyoto, I fell in love with the festival's freshly made カステラ.

I hope that this year, I will be able to find some in Beppu.

Good that you stay calm :) I am following all news, especially on Twitter, since i follow quite a few people from Japan and all big news agencies from around the world. Here is hopefully something reassuring: twitter.com/KasiaBajka/status/48022628383997952

Tteokbokki is delicious, and so spicy! A popular street food in S.Korea and not too difficult to make at home :)

basically they make toppoki souce out of hot ketch-up and corn syroup ;)

but still quite an ok snack

I think tteokbokki usually doesn't have any tomato in it; it's just rice sticks with corn syrup, hot pepper, and maybe red food coloring. Sometimes it's also insanely hot. Not my favorite food but it can be okay as a side dish every now and then.

Hi, I enjoy your blog. Funny and informative.
As far as Hotoku, I strongly recommend trying honey - sweet filling- actually not honey, it is consist of black sugar mollasses like, mixed nut , maily peanuts. it is the original type of Korean street vendor food .

Jisoo: My husband was thinking he might have preferred the "honey" one more.