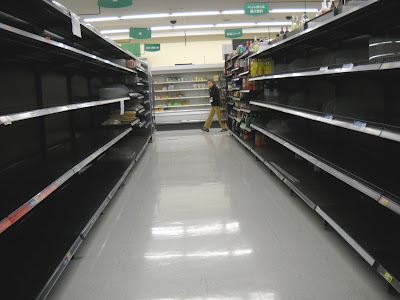 Aisles that usually contain bottled water, juice, tea, and soft drinks that I have never previously witnessed in any state except fully loaded are now empty at Seiyu supermarket.
People do things for different reasons and, in the wake of the Great Tohoku Earthquake, people in both affected and unaffected areas have been panic buying food and daily necessities. At first, this behavior was somewhat puzzling to me because a lot of what was initially bought up was the stuff of earthquake survival kits. The run on instant ramen, shelf stable food, and bottled water seemed a lot like people who were closing the barn door long after the horse had gone. 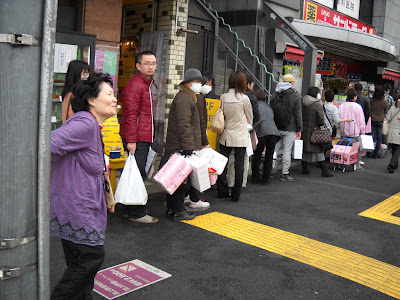 People stand in line to buy toilet paper and facial tissues from one of the few shops that had some in stock.
As I write this post, it has been 5 days since the big quake and the shopping has clearly turned into not only panic-buying, but hoarding. People are not only filling up earthquake survival rations that they should have bought before, but stockpiling food, water, and other supplies. A lot of people believe that this is motivated by the interruptions in the supply line that have occurred as a result of the various quake-related crises. It is true that roads have been closed and some shipping routes have been cut off because of the quake, but I don't think that is the main reason for this behavior. 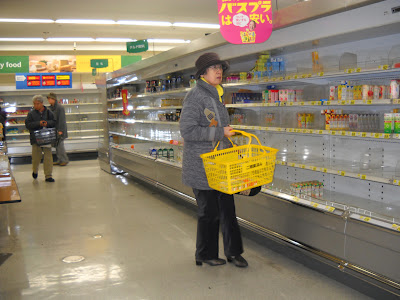 An aisle that usually contains juice, yogurt, and soy milk is decimated.
My feeling is that people are shopping and hoarding in areas as far afield of the endangered and destroyed areas as Hiroshima (which was neither affected by the quake nor at risk of radiation from the Fukushima reactors) not because of fear of future famine or loss of supplies, but because of a sense of having no control. Since there is nothing that they can do to stop the continuous quakes and aftershocks, the constant bad news about the instability in the nuclear reactors, or the devastation in tsunami-stricken areas, they do something which makes them feel steels them against danger. It is ineffective, but the actions are not rational. They are an emotional palliative. 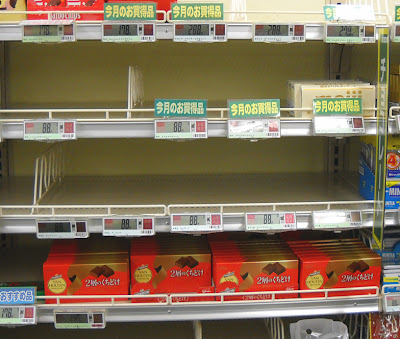 A display that used to contain chocolate bars, which have all been largely bought out.
I've been watching and paying attention to what has been happening in the stores since the start, and it began with bread products, rice, bottled water, instant noodle packages, and milk. Since then, it has expanded to toilet paper, fresh meat, and, yes, even snacks. Since I've been reviewing snacks and have been attentive to Japanese shopping habits for quite some time, I've got a good point of comparison. One of the things I have never seen in my shopping in Tokyo has been grannies buying 3-5 Meiji chocolate bars at a time. Lately, I've been seeing everyone snapping up multiple candy bars, boxes of cookies, and packages of salted snacks.

One might wonder how I can be sure that the empty aisles are not supply interruption issues and I can tell you for certain that most of it is not a lack of stock based on shopping patterns. The shelves are not entirely decimated for everything, even when such food or beverages are highly sought after. Early on, I noticed that 350 ml. bottles of Evian water which were sold for 147 yen ($1.82) were still in stock at Family Mart, but all of the 500 ml. bottles of less high status brands that sell for 100 yen ($1.24) were gone. Additionally, 88-yen ($1.09) pedestrian chocolate bars are flying off the shelves, but other similar plain chocolate offerings that are higher quality which are 288 yen each ($3.56) are staying put. People are only buying lots of things if they are cheap. If this was about raw demand, everything would be gone, not just the cheap stuff.

This panic-buying and hoarding is having a bad effect on disaster recovery in Japan because food and fuel in particular are not available because they are being taken by people who are not in need. People are stockpiling while others are suffering in hard-hit areas. It has been said that the empty shelves themselves incite people to buy more because they inspire fear about availability. Today, I saw a woman snap up the last two-liter bottle of water out from under my husband's and my noses. We weren't going to buy it anyway, but the way she grabbed it had a sense of urgency. The store was limiting people to two bottles each, but their stock by 10:00 am was gone regardless. 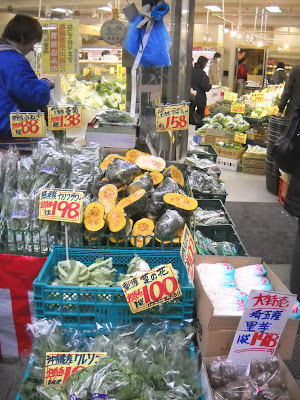 Japanese pumpkins that are never more than 100 yen at this store (and were 88 yen each two days ago), are now on sale for 158 yen.
I've read some sources state that they are surprised that price gouging hasn't occurred as demand has skyrocketed. My cursory examination of the situation leads me to suspect that boosting prices might actually be a good thing as it may stop the hoarding. Since pricier items are left behind and regular or cheap items are snapped up, a little increasing of the prices might settle people back into more regular buying patterns. That being said, I have seen just the beginning of price boosting in my area. Some fresh vegetables and fruit have increased in price by 50% in the last few days. This may be coincidental (or related to actual supply line problems), but these changes have occurred at stores that I have (literally) years of experience shopping at.

I'm not sure when this behavior will end, but I think that it will carry on for awhile as the fear people feel from the nuclear plant problems will push them to act irrationally. People in Tokyo are not going outside or are not opening their windows for fear of radiation exposure, even though currently the levels are not dangerous. People are reacting as if they were in immediate danger even when they are not, and right now the only thing they can do is stay home and shop, so that's what they're doing.
Posted by Orchid64 at 12:00 AM

Fantastic post - it's so interesting to see a view from the ground on what's happening, with some really clear-headed analysis behind it. I'm a fan of your snack review, but this takes it to a whole new level. Keep up the good work and keep us informed!
Deborah, London (UK)

Wow this is like journalistic quality... great job Orchid! We all over here in the USA are praying for you and anyone in Japan.

Thanks so much to both of you for your kind words and thoughts. I really do appreciate it!

You can find current updates in my Twitter stream, maybe something helps: twitter.com/KasiaBajka. It seems very likely the situation is getting really resolved, and the ENTIRE world is watching and helping now, all major governments are discussing the issue, there is international pressure after revealed concealing, the military experts and rescue team and machinery from many countries arrived already etc etc... I am hopeful and Japan is a really strong country, especially now visibly in the face of this crisis :) So do not give up hope, even if it is surely hard. I hope all will move on in a good direction soon :)

I live in Funabashi and the closest store to my house is low on some things, but they have most everything that they always have. There are signs everywhere saying there is no food shortage and to please not take more than you need. The only thing that they don't have is natto and the bread sells out quickly. I haven't checked out any of the other bigger stores this week, but it's getting back to normal around her. They don't have natto because apparently my store gets it from Ibaraki, but I've lived here over 17 years without it. I think I can make it a while longer.

Like the above, I say a very interesting post full of insight. I'm trying to imagine what it's like in Japan right now, having lived there. Of course I was in Kansai and Kyushu which were unaffected by the quake, tsunami and now the nuclear issue, but I'm still of the mind that a degree of panic buying may have pervaded most of the country.

Emsk: It's definitely country-wide, which is what feeds the problem. People who have nothing to fear are sucking up resources and the imbalance is causing problems. I wish they'd settle down, but I see no end in sight.

Have shelves returned to normal yet in your area?

Unfortunately, no. Things look pretty much the same as you see in these pictures.

I've been reading a fair amount of English-language blogs from expats living in Japan and they pretty much sum up what you've also reported. I'm hoping all the best for everyone in Japan right now, but also hoping that people calm down a bit so that resources can be provided to those who need it most. Thank you for filling us all in with a sound voice. Much appreciated.