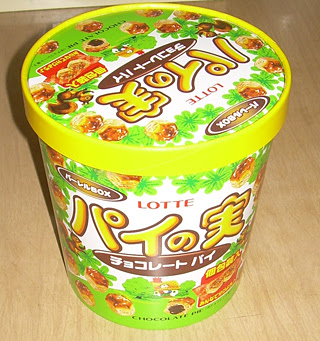 In Japan, you can score a bucket of pies... teeny, tiny pies, but a bucket nonetheless!

Sometimes I think about the future of this blog post-leaving Japan. There is no doubt that I will be able to procure Japanese snacks one way or another after I leave, but I wonder if the same interest value will be there for me. Part of the delight of sampling and talking about such trivial things is that the way in which I get them, though frequently similar, is part of life here. Getting them by mail order doesn't carry nearly a much oomph as finding them on sale for half their price at a discount shop, or whining about how I had to tramp all over my neighborhood to find that one place that carried something I wanted. 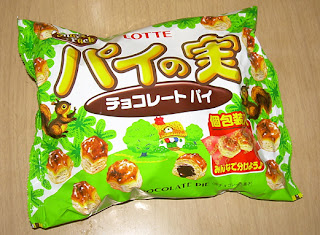 The notion of a bucket of pies is somewhat spoiled when you open it and find this bag crammed inside.

In the case of this, my story is quite unique. My husband and I have taken to walking later in the evening because of the sun beating down on us during the hot and difficult daylight hours. We went out for a rare 9:00 pm stroll and found ourselves at a Namco gaming center. For kicks, he decided to try a machine which had tubs of both these pies and Koala's March cookies. He wanted to see if he could knock one over because they looked to be balanced such that it should have been fairly simple. This is part of the deceptive nature of such machines, but his first attempt (he put in 500 yen ($6.33) which gets you 6 tries), he did a good job knocking one of the Koala's March tubs off-based. On the second try, he hooked the pie tub and it fell quite by accident. Unfortunately, the position of the Koala's March tub became disadvantageous after this and he couldn't get another. 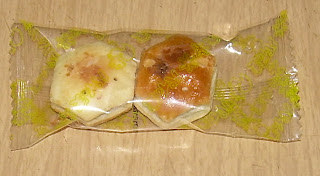 So, we "paid" 500 yen for these, which probably isn't too far from the value of this quantity (I discovered a bag of these costs about 263 yen, so, that is the true value), though I don't think you can buy this configuration in markets. For the record, you can get 12-packs of these from Amazon for about $4. This has a bag with 64 pieces in it in 32 two-packs. Each pie is slightly smaller than a 100 yen coin or American quarter and has 24 calories. I think the name of this, incidentally, translates to "pie nuts", though the Chinese character also means "real" so it may be a play on words. I think the nuggets are supposed to suggest nuts (and that's why there are squirrels pictured on the bag). 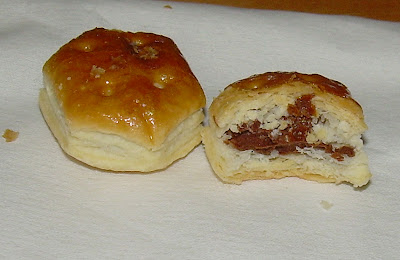 They smell very weakly of chocolate and not much else. The outside of the pie has a little shellac of sugar on the top which lends a little boost to the overall sweetness level, but mostly this is about the texture. The pice is flaky, crispy and crumbles apart in delicate layers. Lotte says there are 64 layers in each one, which is a lot for such a little nibble. The chocolate filling is not particularly intense or sweet, but adds a tasty nuance of chocolate. There is also the flavor of flour steeped in fats that one would expect. It's not especially flavorful, but on the whole, it works.

I liked these far more than I expected because I'm not big into "pie" based sweets in general. However, the size, crispiness, and subtle balance of flavors made for a very enjoyable bite or two. I don't know that I'd want another really big bag of these, but I'd certainly pick up a smaller box of one at the store on occasion. However, I would caution that you have to value texture over strong taste if you're going to like these.

I saw these at the store yesterday and almost bought them! I thought the squirrel was cute.

"Pie bites" sounds so cute! Good thing I can't get at those, I'd go mad trying not to eat them four packets at a time.

Indeed it feels different to buy things in person, but I do love the feeling of opening a package delivered by mail!

I love these with their flaky texture and chocolate filling :)