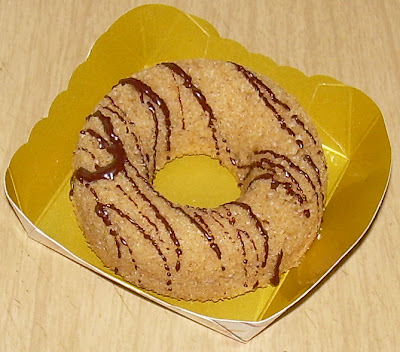 Most people face their moments of cowardice in times of crisis. Do you run into a burning building and save the cat, or do you let kitteh find his own way out? Do you decide to give a speech at your former high school or call in sick because the idea of talking in front of a bunch of bored little snots make you go weak in the knees? The confirmation of my cowardice comes in a far less challenging arena, Mister Donut. Faced with the prospect of boldly sampling a spinach or other vegetable-based donut from the madeleine series, I wussed out and chose a "safe" flavor which was almost certain not to offend my Western tongue. Yes, when the going got tough, I ran in the other direction toward the warm, loving embrace of cinnamon and chocolate. I dwell in a bottomless pit of shame, but at least I have a nifty bit of cake down there with me to help me forget my character flaws. 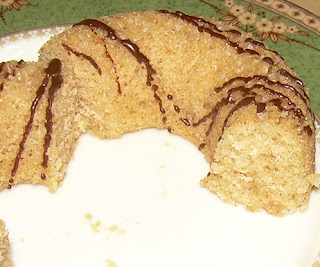 I knew from my experience with the orange version of this line of "donuts", that this was going to actually be cake. The cinnamon chocolate version isn't quite as moist or decadent as the orange madeleine one that I reviewed previously. It has a good strong cinnamon flavor with a hint of chocolate, which is a little surprising since strong cinnamon historically hasn't been my experience with snacks in Japan (save the Meiji cinnamon chocolates). The first bite reminded me a bit of cinnamon French toast, but the truth is that this is incredibly intense and flavorful. The sweetness balance was just about right.

I liked this, but even for a cinnamon lover like me, it was a bit on the strong side. The cake's texture is agreeable enough, but I had an odd sense of it being oily moist rather than moisture from eggs, sugar, or pureed fruit or vegetables. Oddly, the "safe" choice may not necessarily have been the tastiest one, though this is still pretty good. If I get brave enough before they stop carrying madeleine donuts, I promise I'll go for something on the riskier end of the scale. However, if I were you, I wouldn't count on my rescuing your kitty.

Just a gentle reminder that there is a contest running for two weeks to win a few snack and snack-related goodies. If you'd like to enter, the details are in this post.

Between 2 donut styles from Mr.donut,which one do you like better generally? Fried ones or baked ones you have tried recently? I tried a few baked ones, but all were disappointing.

I like fried donuts best, but it really depends on my mood. My big favorite (and usual purchase) at Mr. Donut is an angel cream.

The baked donuts in Japan are pretty much just ring-shaped cakes. That doesn't make them bad, but just makes them not really a donut. :-)